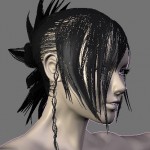 Continuing with my hair tests, I almost finished a hairdo I am not ashamed of.

Now for the fun part.

I had various crash to desktop from Blender previously when I rendered the particles and was told to moderate my child particle number. I did. And for a time it was good. I could render.

But if I zoom in with the camera, and render… boom. It crashes to desktop.

I haven’t changed any parameters… just the camera point of view and distance to the object.

I think what’s happening is that when you are zoomed out several of the child particles are basicly clumped into single lines because of their high distance from the camera. When you zoom in, blender tries to visualize them all and boom.

I hope I’m wrong and someone else has an Idea though, cause if i’m right the only way to solve the problem is to either cut down even FURTHER on your child particles, which will make the hair really thin and stringy, or upgrade your computer to handle the extra processing load.

Thanks for the hint. I will take a look at that.

In the worse case, I might ask Jahka himself for some advices…