I have an object that I tried making a loop cut on and bringing up the new cut all the way toward the top. However, the new edge stops before reaching the location that I want to put it, it cannot go all the way to the top or to the bottom of the object. It won’t let me slide it any further. Thinking I might have bumped a setting somewhere I restarted Blender and tried a loop cut on the default cube. Sure enough, the new loop cut could be moved wherever I wanted, even directly over the original vertices. I appended my original object from my other file and tried again, with the same result. I couldn’t get the cut where I wanted it.

Does anyone know what might be causing this on certain objects but not others? Did I do something to my object?

When you did a loop cut did you press E to switch between Even and Non Even cuts ? (options visible on 3d view header)

Here is the Blender file. 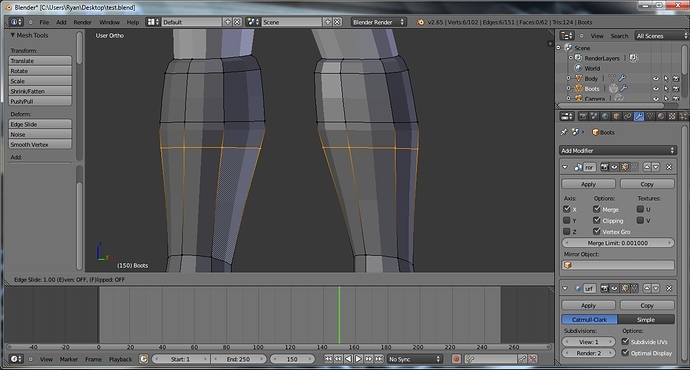 This picture shows the maximum extent to which I can bring up my loop cut. It is this way on every object making up the figure, but not on the cube.

Turn off the subdivision surface modifier

Alright, thanks so much. That appears to have been the problem.

Also, for future reference, is this the right place to post these sorts of questions or is there a more appropriate location on this forum?