Looking for some focused critique on this.
Rendered in luxrender
postpro in photoshop 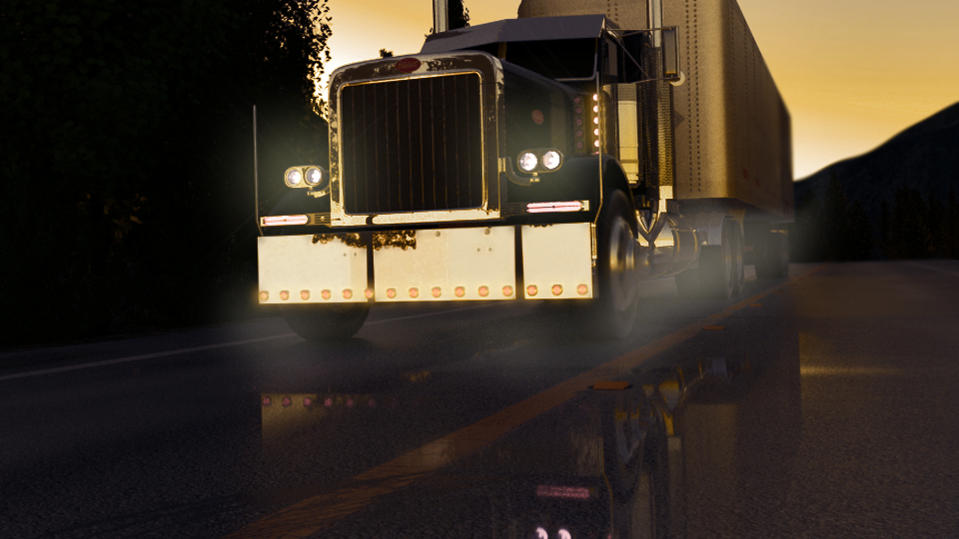 The first thing I noticed is the image is so flat, road, the truck etc… Add some bumps in the road and the front bumper of the truck.

Add some bumps in the road and the front bumper of the truck.

Was one of my first thoughts too, I agree. I would also do some brightness/contrast adjustments (or RGB curves). Composition standpoint, I don’t like how the top of the truck is clipped but the bottom third of the image is “boring” asphalt. I understand there’s that low angle you’re trying to create, but I think with some fiddling both can occur. I’m sure it’s HDRI but I am a bit confused by the lighting also. It’s as though the sunset is behind the truck or to the left, yet there’s lots of reflection off the front as well. It’s like it wants to be a back lit shot, but light was added to the front to make it happen. I don’t know that it’s bad, but it’s distracting as the bumper to the sky feels “broken”.

It’s a kick ass model though, you’re truck is hands down one of my favorite (if not my very favorite) vehicle on this forum, so I bow to you! Look forward to seeing how this finishes up.

Heh thanks guys, modeling is definitely my strongest point, and rendering is my lowest, so it’s good to have some criticism. I am going to take all you guys said into account, and I will post an update here asap.
thanks a lot!

Ok, I decided to trash the last scene, and start all over. What do you think? 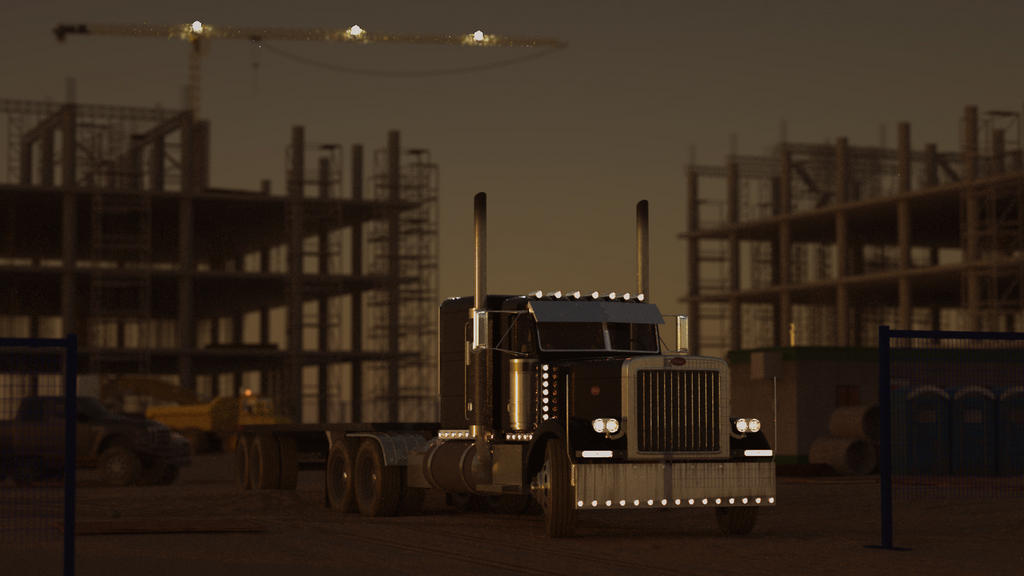 nothing much to critique though, maybe make it a little more dramatic (sunrise behind truck). Looks a bit bland right now. Also, you need a wider range of colours.

Why did you “start over?”

In both cases, the thing that’s making the picture look-and-feel “unacceptable to your eye” (to whatever extent it may be so…) is simply a matter of tonal range and cropping.

The good news is … these are not “complicated 3D-rendering problems.” These are old-fashioned “photograph problems” that photographers (and artists…) have been wrestling with, in various forms and with various image-making technologies, for a very long time.

Pick whatever composition you prefer. (Both of them are equally good starting-points.) Then, “look at the light …”)

hmmm… i feel you need a wider range of colours, this doesnt mean it needs to look like a teletubby exploded on it, but maybe a greater range of yellow / browns in there. also, I keep feeling the truck should be facing the other way (like a mirror image)
EDIT: I made the few corrections i talked about [hope you dont mind] 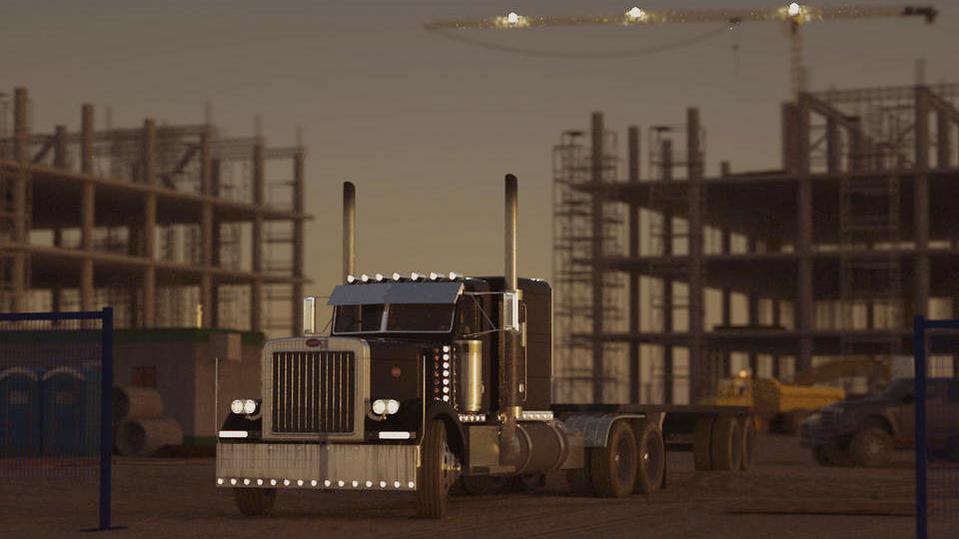 The way that tower crane arm is parallel to the top edge of the image is very distracting. It makes the image seem too static. Give it a bit of an angle to shake things up.

Im loving the model of the truck but in the first picture I think you missed some things which I thought the more experienced users wouldve picked up. The reflection of the truck on the (wet road?) is well, too reflective imo, and also if you look in the reflection the wheel of the truck is stationary, no motionblur like the actual wheel. oo and also Im nt sure if this is an error or on purpose but on the bumper, the 6th light from the left, is hovering/not on the bumper?:S or are my eyes being a bit weird lol. the tree’s on the side of the road I think could also be blurred or warped slightly to emphasize motion?(not really necassary). and like someone else said, the road is looking kind of smooth+flat, I dont know what to say about that as Im not that great at texturing lol. but other than that I love the model and how is put together. Good work bro!!

Ok, thanks for the suggestions everyone, please ignore the first scene for now, I have changed scenes as I think it fits better in the construction site. Please review my changes
thanks
http://dl.dropbox.com/u/1131524/99.jpg

Looking much, much better!

Still a couple of things need improvement(in my opinion)
Firstly, the chinmeys/exhaust things(don’t know what they’re called :(), look like the pillars in the background. Secondly, the lights on the crane are way too strong, blowing that part of the image out. Lower the energy of them.

They are a few random pixels that are too bright, and out of place, but i’m assuming that because this was rendered in Lux, they will be removed when you do the final render.

Looking only at the second image, there are a couple of things i would do. They address things that others have already mentioned.

Other than that, nice model and nice scene
Matt

The world appears to end immediately beyond the construction site.

The lights on the tower crane are blown out and distracting. Reduce their brightness considerably.

You might also consider some very light mist to create atmospheric perspective.

The bar of lights just in front of the air filter are lit, but the reflection of these lights aren’t. I would add a hint of smoke coming from the exhaust stacks, or maybe a bit of heat shimmer.

Agreed with most of the above comments.

The tires seem to have a bit of dusty/sandy look about them, but this isn’t continued onto the textures around the wheels such as the mudguards etc which makes them stand out a little too much in my opinion. A dusty/hazey look in the air of this scene, if done subtly, could add some really nice atmosphere.

The crane material is far too reflective of light in my opinion and the lights on it are very distracting. I agree with reducing the depth of field quite considerably so objects start to blur around the back end of the truck - just beyond the cabin maybe. Your sun light is a nice colour, but I think the placement is making the image look a little off as the light seems to taper off about 3/4 of the way up the vertical exhaust things behind the cabin rather than lighting the whole area evenly like real sunlight would.

The only critique I have about the truck itself in terms of modelling is that it looks like it doesn’t have very much weight for something that is obviously supposed to be pretty heavy. Subtle things like losing the circularity of the tires slightly so they compress a little at the bottom and bulge outwards from the weight at ground level could help.

Also agree that shifting the camera closer to ground level and looking up at the truck slightly could give the truck more presence in the composition.

This is a great little model though that will make a good render when it’s all done! Keep up the good work

I Love it simply gorgeous truck model. only critique I would have is the trucks tires seem like they are made of gold, which Im pretty sure is not what you are aiming for.
I like the biffy (portable toilet) in the second story, rather humorous.

Followed the thread and the comments resulted in fantastic progress, it looks great now.

Well I have taken everything you guys have suggested into account, and updated my render (obviously i didnt let it run long enought, but I wanted to show you all)
IMO it looks WAYYY better, so thank you to everyone who has spoken up. Now I still feel like its not quite there. There is still something that is keeping it away from reality.
shoot. 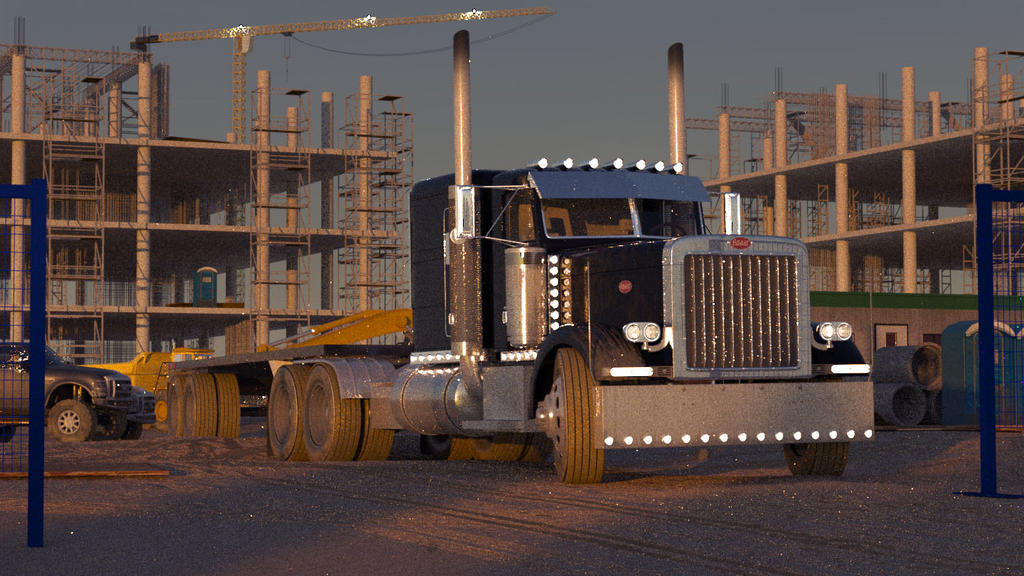 Mammoth improvements from the first posts…
yeah, maybe another few hours of rendering if you want comments on details, but it’s damn sweet already!
i’m not so keen on the gates, they seem to emit some shadeless blue?