Trying to add the widescreen top/bottom Black Bars. Is this the best way?

I’m trying to add the black bars you see on widescreen videos.

The Border option is great (Shift+B) but you can really measure it exactly.

I’ve tried to do it w/nodes. (Attached pic)

Does anyone else have a better way of doing this? 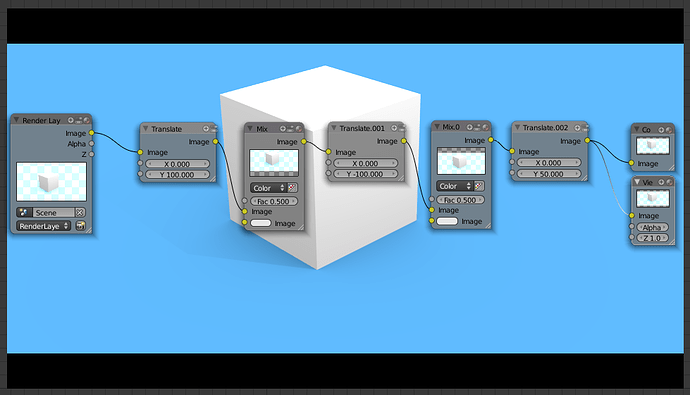 In Gimp, photoshop or inkscape? .png with alpha?

render to 16:9 & let the DVD/BD/Computer display the black bars so you don’t need to waste data on black bars?

I want to force the black bars so when the video is put on a site, it has them.
Weird artistic choice, sry don’t ask : p

basically I believe it’ll bring more attention/focus on the piece itself.

Next time you’re at an electronics store, go compare a flatscreen TV with a black frame, with the one that is grey and you’ll see what I mean. make sure a video is playing.

Also another reason is how it makes the viewer feel. Gives a more cinematic feel I believe. Of course if the piece itself is sh*t then none of this will matter. I’m just experimenting and learning I could be wrong.

most consumers today get black TV’s (I didn’t even KNOW there was another color available!

). But if what you said it true then it’s not a bad reason.

If I were you then I’d do this: since you’re not actually doing 16:9 resolution, render out your video in the format you want it w/o the black bars (ie 16:10, which would have a shorter height vs 16:9) & then put that rendered file in a new 16:9 project. It would then automatically put the black bars up for you to fill in the space above/below the video. At least I believe it should.

I do this when I want to fit an already-rendered image aspect ratio to a different display ratio – some sites like youtube & Vimeo will stretch/squash submitted vids if they depart too far from accepted image proportions. Similarly, submitting to competitions and such may have specific display format requirements – you can use a “letterboxing” method to fit the specs without re-rendering or distorting your rendered imagery.

My technique uses the Compositor. If you use Gimp or any other image editor to create a black “canvas” frame the size of the full area you want, “black bars” included, you can then place the rendered images over that using any number of node options – a Color>Lighten node is one I use often.

This also works when doing split-screen setups, using Distort>Translate and maybe Scale nodes to put the various image elements in place on the black “canvas” frame.

You even can use nodes to place the rendered part off-center if you wish, add frame elements, subtitles, whatever.