I’m trying to create a textured and coloured glass material similar to some we made in trueSpace 3. They never worked in other versions of trueSpace, but similar settings are closer to the mark in Blender, so I have my hopes up. These materials had good transparency and the inside of the far surface was qualitatively different from the outside of the near surface. 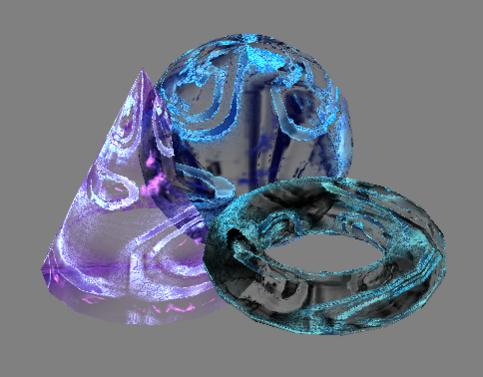 Using the same files as bump and environment maps in Blender that we used in the original trueSpace material to modify an existing glassy and textured material is getting me part of the way there, but bringing in a lot more colour from the bump map, a lot less influence from the chosen colour, and a lot less difference between far and near side of transparent object. Clearly, changing the bump map image would change a lot, but it looks as though it wouldn’t impact on the far side, near side difference without me learning something else. It looks like a bubble of fire right now - quite amusing I guess. 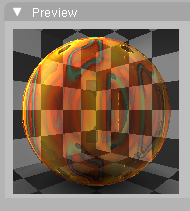 I’m basically new and thick at Blender, I am just a teacher who has another go every few years when I get another student who thinks in the right way for me to start them off with computer graphics and let them fly. And every time lately I have thought how much the kids liked this set of textures. It is easier to hook them in if they can do something really simple and have it look great already, so they want to do more. Therefore all help appreciated, including pointing out where similar existing materials may be found to use or learn from while adapting. The material I used as my starting point this time was the blue microscopic organisms material from http://www.freewebs.com/blendermats/

I am perhaps making progress. As the bump map is showing the colours it is made of, I have a bump map that is white shading to transparent. The speckled turquoise environment map that modified the colours in trueSpace is not modifying them in Blender, which may just mean I need to learn more about how it uses environment maps. The colour I select also seems to have very little influence. However, with lighting I can get an overlay of colour on the outer surface of the “glass” that enhances differences between outer and inner glass surfaces. This isn’t quite as effective in that it adds colour evenly rather than in a textured and therefore sparkly way. It also isn’t part of the material as such. Compare preview with render. 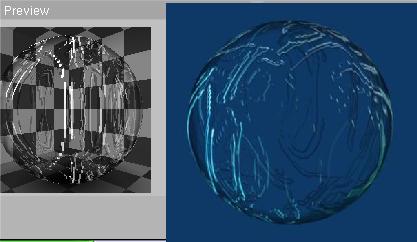 In 2.5 you can duplicate the mesh and have the duplicate use a volumetric material and the original use a surface material, the TrueSpace reference suggests it uses a sort of volumetric effect.

I do have two textures in those images, but one seems to dominate in each case. Also transparent shadows are on in the orange bubble.

Have a look on the YafaRay forums as this is a rendering plugin to add to Blender. I used this to render a gold ring and the result was a lot more realistic than the settings in Blender.

This thread I have found may help with the glass texture

the first image you’v shown is more like a texture on the outside surface then inside the volume!

so not certain if volume is appropriate here but depends what you need?

Yes, the pattern is mostly on the outside. However it has three components to it. A colour, a texture from a bump map which i think mostly ended up telling the colour where to go and where to be transparent, and a layer that is usually pale turquoise covering only some of the coloured area, which came from an environment map. This meant the inside layer was one colour while part of the outside layer was another colour - usually turquoise. I haven’t figured out how to do anything similar in Blender as yet, as I had to reformat my computer. Anyway, I shall keep trying

if you define your volume as being a shell sphere with a minimum thickness!