Trying to make a waistband in a skirt (Boolean help)

i have a circle mesh and a leotard mesh i would like to punch a waistband shaped hole in the circle (this is to make a skirt).

beginning with moving the 2 meshes into place (so that the circle is lined up on the leotard correctly) what is the shortest way to make the needed hole?? (i have tried using a Boolean subtract but that leaves the leotard mesh in place)

Please attach or link to your blend file. I’m sure given your description, if you show your post to 100 people they will see your scene in 100 different ways !

Did you apply the boolean ? If it leaves an unwanted mesh behind you are allowed to delete it

http://dl.dropbox.com/u/5398233/badwolflabs/skirtdemo.zip this is a zip of the blend file and the objs

I dont know if You know this movie, but You can find it usefull, start from 15.00 http://www.bsurfaces.info
Also You can try to do it in other way, go to front view and make a line cut with knife( Z and C on) it will create a new horizonal loop on leopard. Select it press P ->selected, extrude it scale out then select extruded verts and shift+alt+s to make circle from outer verts.

Booleans are for solid objects (fully closed) and their topology is usually pretty questionable. If you’re going to match these items up, you should have matching numbers of vertices to join. Personally, I would delete the dress, then grab the edgeloop around the waist line (SHIFT-ALT-right click to select edgeloop), hit E to extrude (then type the number zero followed by ENTER to end), then hit S to scale it to the size you want. This won’t give a nice rounded dress like your circle, but you can either manually round the points, or add another circle and merge the points if you want it perfect.

At this point, the dress will be attached to the body mesh, which is not ideal because it’s only one sided (no thickness) and will likely cause normals problems etc. In edit mode, select all the faces of the dress, then push P to separate the selected faces as a new object. They will be separate and the waist will fit perfectly. Personally, I would shrink the waist line a little into the flesh because you don’t want the bending (animated) body to reveal the waist hole.

Yes, this method is a similar approach to the one given by rrtk

P.S. That bsurfaces video (from the start) is awesome. Maybe we will yet see further improvements with Blender NURBS after all

D’oh - I just tried Booleam “Union” on your dress and it worked first time. Like I said, topology not nice (triangles), but if you select the dress, add Boolean modifier, point it to the body (you’ve called the body “Mesh”) and have the boolean type as “Union”… now when you opt to “Apply” you have the dress shape with perfect fitting waist line. Given the topology, I would use the earlier methods.

my goal here is to have a leotard shaped hole in the dress/circle. This is of course step 3ish of a roughly 20 step process in making ballet skirts/tutus.

and the problem with trying to select a handy edge loop is there are no edge loops even close to the right location.

so Boolean Union works but does it leave the leotard in place???

so Boolean Union works but does it leave the leotard in place???

The way I see it, the “difficult” part is in making the hole shape, which Union does. After this, combine the leotard and tutu with Object Mode’s [CTRL][J] (join). 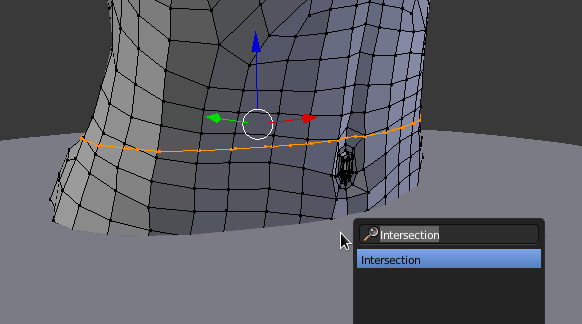 if this does what is says on the tin this is exactly what i need.

It does leave this nice intersection line. Loop tools Space helps to even out vertices; then just P separate that, extrude and use Cloth sim. If i understand correct you’re after something like this? 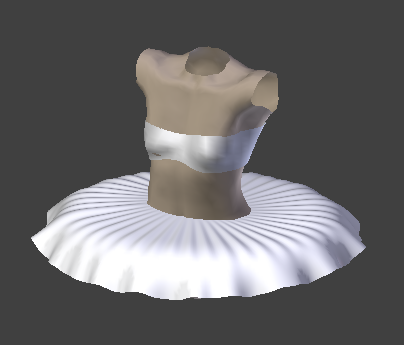 just about now is there an easy way to merge the outline with the model?? (basically i want the outline to replace the hole in the middle)

New edge between vertices on face - J; just J, simple as that.
I got Intersection line - vertices belonging to torso. Next i P separated them, while selected, into a new object and extruded. Then Loop tools Space and To Sphere for outer circle. So the plane was a helper object only actually.
Another could be no scripting, take circle and Shrinkwrap Project that on torso. Bra thing is quickie where same Shrinkwrap is used on simple Cylinder.
Intersect script would be most convenient tool to do the leg part of swimsuit/leotard, not counting manual tweaking of course.
Believe or not, but i managed to escape from Big Ballet Project while one have no say in Society. Since then there is this prejudice in me to this part of Arts ;). 3d technical difficulties are different kind of animal tho.

i have found that using the knife tool and tracing the new edge works but i would like to find a tool that does this automatically.
just think in this YOU can be Society.

Its not quite clear for me why would you want to cut the mesh instead of creating new, based on such cut lines. Even this probably is too much vertices compared to what could be done using Grease Pencil retopo, Bsurfaces or Shrinkwrapping some primitives.

The insertion you have is going diagonal through the edgeflow. If you’re wanting to use this for animation, you’d be better off with some retoppo or lining up the skirt to the waist.

Then Loop tools Space and To Sphere for outer circle. So the plane was a helper object only actually.
.

i found To Sphere but i can’t find Space (which i am assuming would even out the size of the different faces) can you tell me exactly where this is found???

Its not quite clear for me why would you want to cut the mesh instead of creating new, based on such cut lines. Even this probably is too much vertices compared to what could be done using Grease Pencil retopo, Bsurfaces or Shrinkwrapping some primitives.

if you download MakeHuman and check it out what im trying to do is a set of ballet clothes. due to how clothing is done in MH i need to have verts as close to the human mesh as possible. 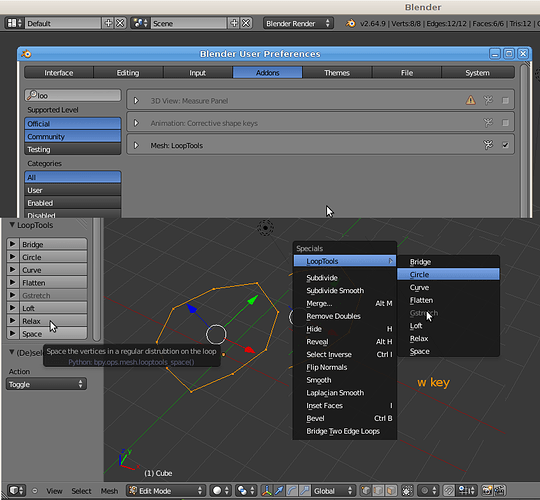 my copy of blender 2.64 had an older version of looptools