Turns out, Cycles wasn't the problem

Just to test my theory, I… might as well just come out and say it, “downloaded” Cinema 4D R16 just to see whether cycles was the problem

So I did a test render, Looked clean, really clean, literally not a spec of noise in the render and it took 5 seconds to render in my laptop
(wasn’t using my main machine, vowed not to pirate anything in my main machine or use anything I pirated for anything other than educational use) on the lowest GI setting mind you.

So I concluded that Cycles was the problem! That it was the cause of the noise and long render times!
That wore off quickly as I remembered that I didn’t turn on shadows on the lights

When I did… well…
Same problem as cycles, also revealed some of Maxon’s tricks,

You see Cinema 4D’s renderer isn’t noiseless, it just post processes it to make it look like that(Surface blur mixed with an open gl render of the camera)

So turns out it was the shadows, the lights were not properly placed, and like Gottfried Hoffman said,
MIS for each light is really really stupid

Hopefully with this lesson I’m going to stop bitching on forums without doing some real investigation first.

Going to try and configure the lights or if possible, delete all the lights if it comes to it 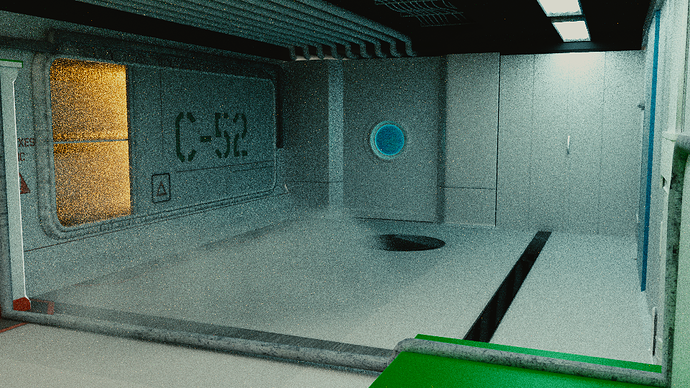 Just say you made an artistic decision and call the noise “film grain” :evilgrin:

There’s a lot you can do to bring down the noise and render times, but I wouldn’t advise even starting on that before you’ve completed your geometry and shaders.

Unfortunately I can’t offer any specific advice without playing around with the scene and determining where the problem areas are.

Like Clamping direct and indirect?
Turning off caustics?
Turning on MIS for each lamp
Making each lamp bigger?

Did all that
didn’t work

Look for a cheap (or free) render farm.

Like Clamping direct and indirect?
Turning off caustics?
Turning on MIS for each lamp
Making each lamp bigger?

Did all that
didn’t work

Clamping direct is pretty pointless. Turning on MIS for every lightsource doesn’t do anything. Making lamps bigger is also pointless, size only matters for geometry with emission materials. Turning off caustics and clamping indirect probably helped a little bit, but these only really help with fireflies, not so much with reducing general noise.

Again, while I’m unable to provide any good advice without looking over the scene, generally, making cheap alternative shaders for anything beyond your first camera ray is a pretty good idea a good deal of the time. That’s where I’d start.

Meh, I’ll render it for you.

As a rule for most materials I make, It needs too look alright in 250 passes (Volumetrics at 500) and that needs to render on a suzaan in less them 5 minutes. on my machine.

But if you need to clock a few hours on a machine drop me a line.

there’s something else I can do…?

You’d do that? That would be awesome

fsfxd Your a cool person around here, I don’t mind helping out occasionally.

This is why on my budget I’m not even trying for “photorealistic”. Toy Story is still a great movie, because of the story and animation. I’m just happy with pleasing to the eye, and screw realism.

Its a little location dependent, But used server hardware can be put to rendering tasks with fairly nice results. Say what you will but 128 gig of ram and 24 threads is a fairly nice solution for a couple hundred dollars.

If you didn’t use us previously you could create an account now. There’s a signup bonus for first time customers you can use, and the render time will be significantly lower - on a CPU server the same scene will probably take around 1.5 hours. On a GPU one it should take even less, depending on if/what kind of volumetrics you use (those are just ballpark estimates based on the CPU type you have). But in the end, even if you don’t get to render all the intermediate scene versions, it’s a resource that you can use to render the final one fast.