Turret Mayhem(The Day has come, the game has now been COMPLETED(V 1.05)) 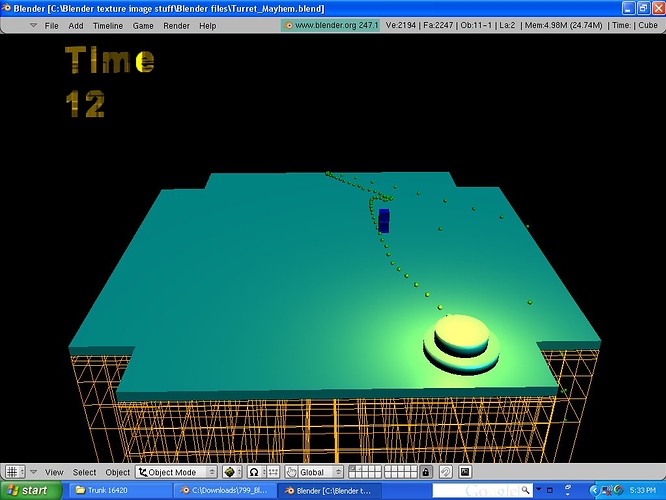 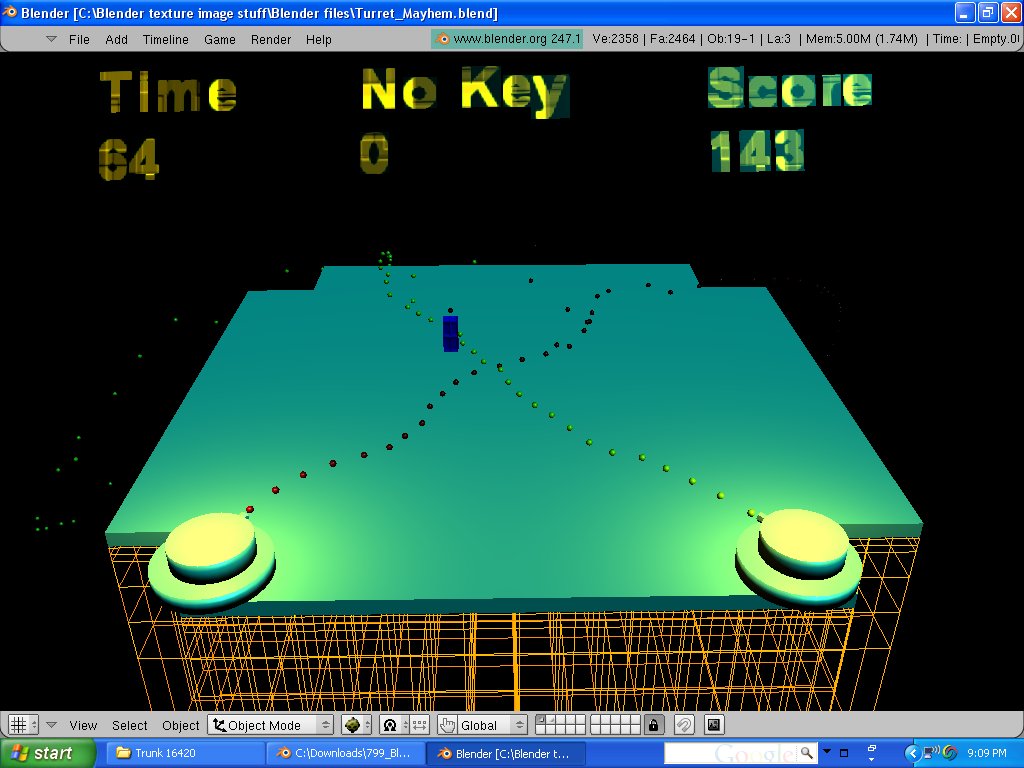 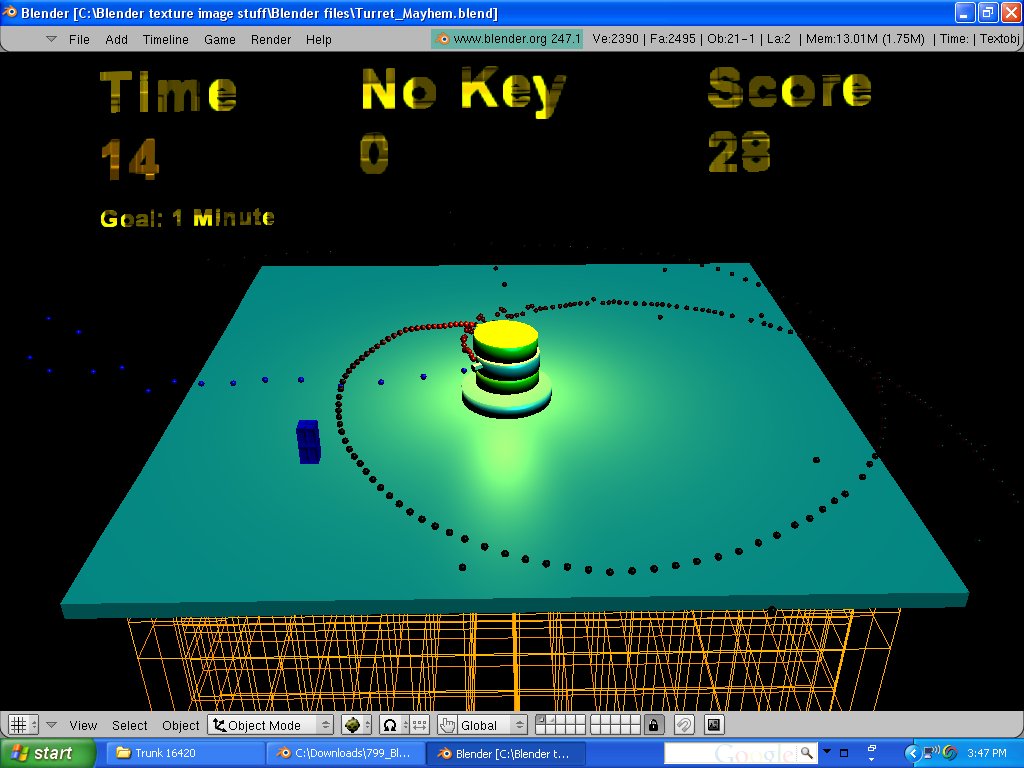 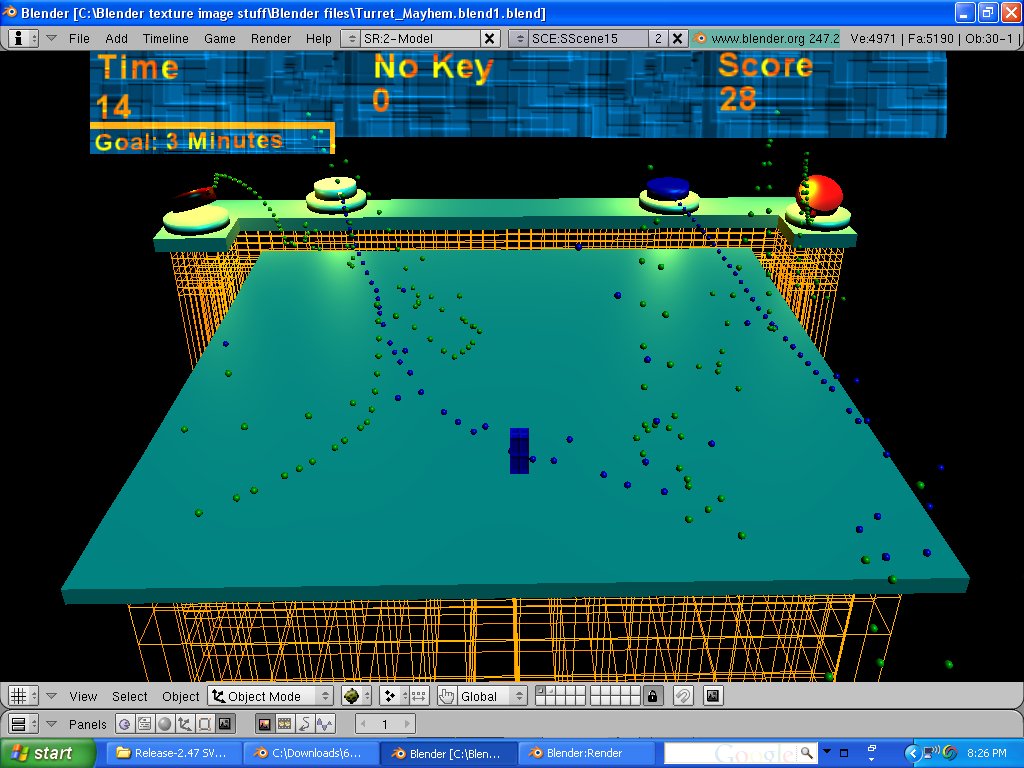 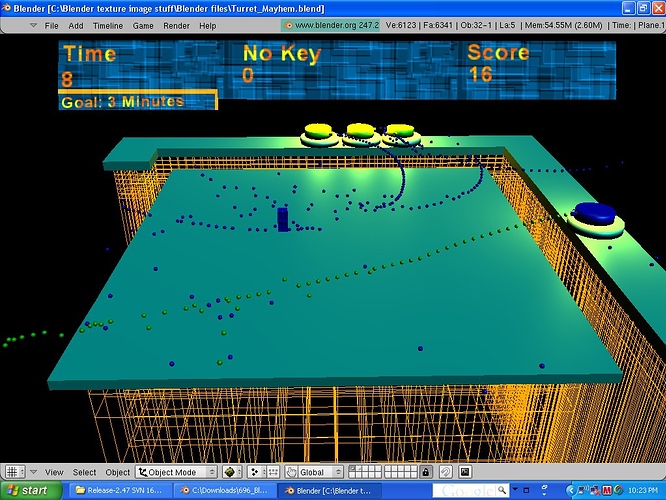 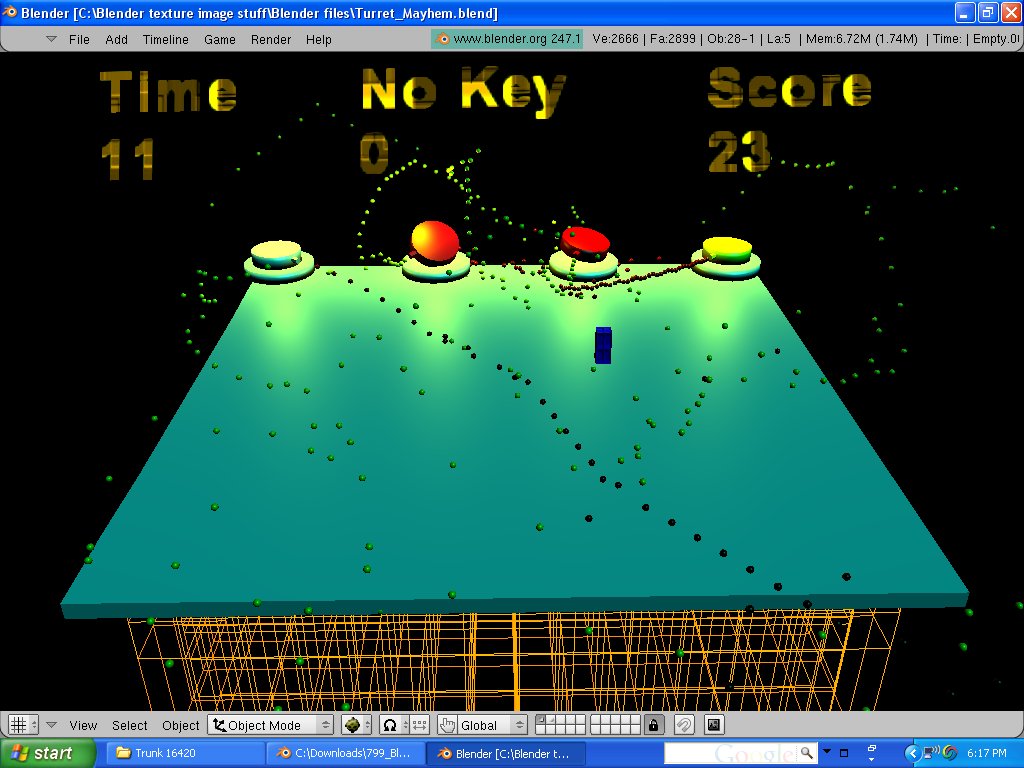 Help and more information is in the game.

The game has now been completed, and adds to the BGE’s growing list of games completed within it. Survive 24 levels of Turret Onslaught as you struggle to stay on the arena floor for the designated time. If you need to exit the game at level 15, you can continue the game later. Good luck and have fun.

That said, it’s a good beginning to a simple game. It looks like it could be fun. You’re going to have to have some way of making it harder, because as it is it’s the same difficulty no matter how long you last.

Also, I’m not a fan of the texture on the main character, maybe just have a solid color? I don’t think you should put on a texture “just cuz,” but that’s a matter of personal preference.

Well, I added a spacebar jump. (I don’t really know what I’m doing.)

It’s a good start for something. You could add some objects or buttons in random locations that need to be collected/pressed to blow up the the turret. Higher levels could have more turrets. And I think you could also add sliding floor panels (holes in floor) or jump/climbing platforms to reach the buttons to destroy the turrets.

You could have turrets placed on each vertical level or the turret could extended or levitate like a flying Dalek. (The cube does look a bit like the Tardis.)

Another idea is that you could have a sort of escort mission, where you have to safely escort some NPC cubes across from one side to the other without falling off.

Powerups could give you a shield to bounce back the balls without knocking you back for a few seconds.

Are you sure, I checked and the textures were packed, you have to enable GLSL materials to see them. It could be my first upload didn’t have them packed, but I uploaded an update and the textures should be packed.

That said, it’s a good beginning to a simple game. It looks like it could be fun. You’re going to have to have some way of making it harder, because as it is it’s the same difficulty no matter how long you last

It won’t be an endless game of sorts, that’s just level 1. Higher levels will have more and different types of turrets (thinking a 3 stack with each of the sections shooting a different bullet at a different speed. I got done with level 2 with two stationary turrets each shooting a bullet of different mass. Just to make it worthy of taking risks, the start of the scoring system gives you points for every second you don’t press a key. Higher levels I also plan on having holes in the middle or something, or maybe different elevations.

Also, I’m not a fan of the texture on the main character, maybe just have a solid color? I don’t think you should put on a texture “just cuz,” but that’s a matter of personal preference

That’s modeled, that’s not a texture, I thought the player would look boring as a simple solid rectangle.

Harveen, interesting ideas. I think I’ll put down floating turrets and I did have the idea of some levels having you trying to push the turret off of the edge. About blowing them up the idea of them being there and you can’t destroy them (except in supposed levels where you push them off) is a major point of the game. The game is mostly trying to survive the onslaught long enough, not destroy them.

Harveen, also, adding a jump could just make things easier, it adds an interesting challenge in that you can’t jump. 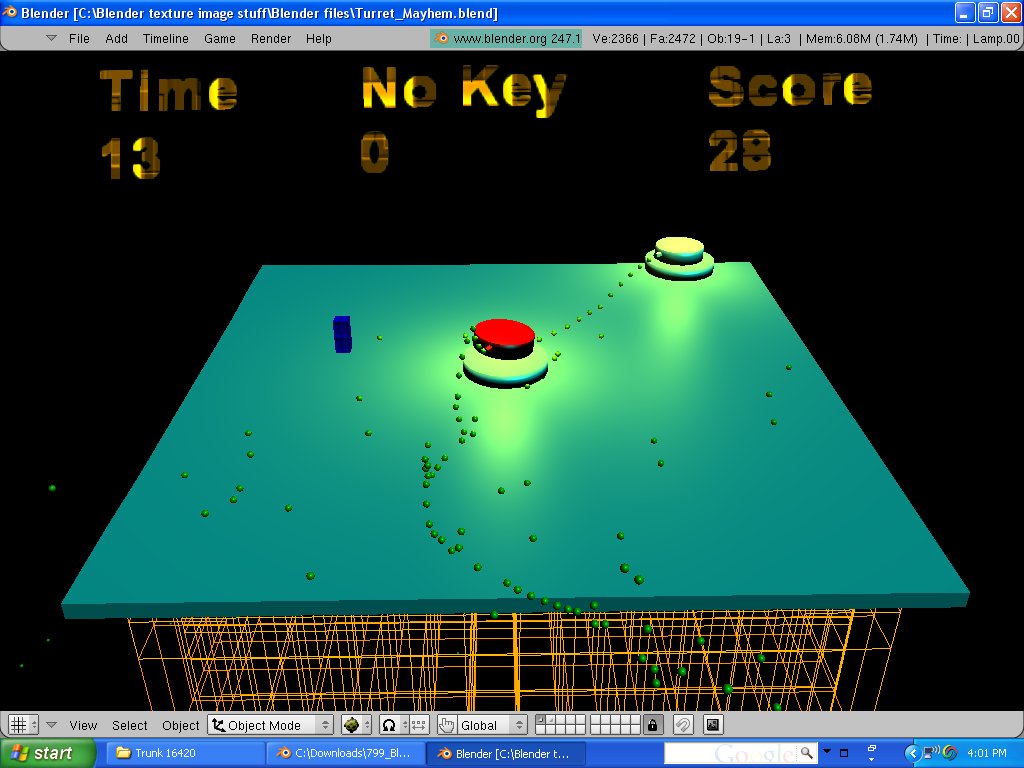 I’d say the middle turret in this level acts as if it was broken, spitting bullets at very high rates, wobbling up and down and spinning around at certain periods. Provides an interesting challenge even though it’s not supposed to aim at the player. The white turret just goes around the level’s perimeter over and over again.

I have no textures but now I know why no GLSL support(that right there is what will drive me out of BGE when 2.5 comes out most people will make them with GLSL so yeah).

Ah, I was trying to run it with 2.47. It was primarily the text that wasn’t working. What build are you using?

I was using this build.

I have no textures but now I know why no GLSL support(that right there is what will drive me out of BGE when 2.5 comes out most people will make them with GLSL so yeah).

You can get an Nvidia card that has GLSL support with the latest drivers for just 100 bucks. And the GLSL is the only way to get nice per-pixel lighting and the texturing in the text.

4 turrets in a single level

New version has 4 levels, I hadn’t yet coded in the conditions that determine whether you advance to the next level after falling off or restarting (will have to do with survival length)

It might be interesting to have a level with walls outside the arena (but with a gap between the floor), so some of the balls bounce back off the walls and create a different patterns. Or maybe you could try a series of small planes moving around the perimeter (like giant pong paddles) reflecting back a few balls.

In that case, you might have to make the older balls dissolve on their own after a certain time limit to prevent too much build up.

I was thinking of a level where there is a wall that’s not attached to the arena, but is at a certain distance above so fast moving bullets from upper guns of a multi-level turret would bounce off. As long as they help make it harder to stay on the arena.

Just to note, right now it doesn’t automatically restart when you hit the invisible plane, but the timer stops and the no key bonus no longer works.

Here’s the 3 stack I listed in the changes

Due to the difficulty of staying on for long periods in this level you only have to survive for a minute before being eligable to advance.

New levels have been added and the game has been updated to work with the new margin option and the way the newest Bullet handles collisions.


Get the latest build with that stuff here if you want to see how the game was updated to work with the recent commits by Ben.
Ace_Dragon (Ace Dragon) April 27, 2018, 8:18pm #14

Apparently no replies for a while, however, moving on.

Apparently you wonder how many ideas you can have just by having a single level square. I started making a new major arena layout, as in this screen.

I have reached the 15 level mark now, more are still to come.

Im having trouble downloading the .blend.

It only gets to about 27.3KB and then stops, so Im not sure if its the host site your using or just my net. I tried to download this a few days ago but had the same issue.

This would make a great multiplayer game!

The mandatory screen that comes with the new update

With 20 levels already, it may not be long till I decide to package it with a menu, help, end screen, and credits and call it done.

The game is completed, first post is completely edited to show this is now a finished game thread and no longer a WIP thread.

Cool concept overall! Now is very well presented, and I like the way the lines under the platform look.

10 minutes, however, is WAY too long to be puttering around on the 1st level. The first level is super easy to survive, and I found myself bored after about 45 seconds. It’s fine to start easy, but if you make the difficulty curve too gradual you make your users bored.

The first several levels have longer designated times because they are a lot easier then the later levels, how long a designated time do you recommend for the first 4 levels at least?