This project was completed using a combination of Blender, MakeHuman, MakeWalk, Audacity and the CMU free motion capture database. No commercial software was used (OSX excluded). This is my first real attempt at character animation and use of the Blender NLA Editor.

The resolution is 4K CinemaScope (4096 x 1716) using 600 samples per frame. This introduced some interesting challenges of it’s own. In particular extreme render times. To solve this problem it was rendered on a personal AWS EC2 Render Farm using only c3.8xlarge (32 CPU) and c4.8xlarge (36 CPU) Ubuntu servers. Ansible was used to provision Ubuntu servers with Blender installed in AWS, manage file sync to and from S3 and manage an SQS Queue containing jobs for each frame to render.

The Youtube Audio Library was used for the following: 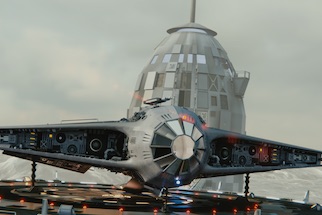 Neat post processing and scene! You might want to try a few more camera angles. Also, have you tried IK for your characters?

The character was exported from MakeHuman with an FK rig. I used mocap for most of the character animation and tried to fine tune where required in the NLA Editor.

The person needs a bit of work

I agree the vessel is great but it’s really a shame that the character’s face looks so basic. especially ears.
Also I noticed some glitches in the walk animation