Long time no see BAC! It’s been a while since I’ve been active on here, and that’s because I was pretty busy with other things over the summer. I’ve started another Tyrannosaurus model, this time just the head. I’m hoping to achieve better results with this one. I tried plane modeling as opposed to box modeling, and I like it better. Anyways, here’s a WIP render: 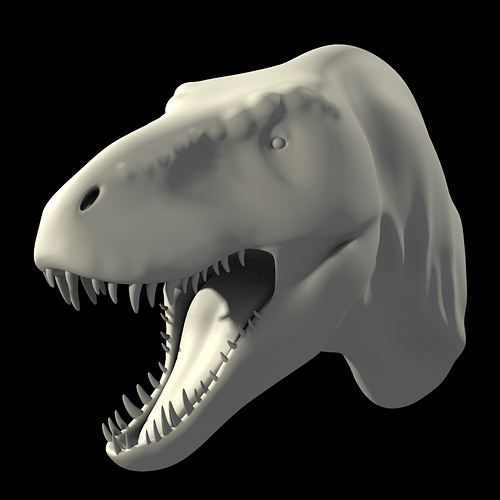 Far from finished, but I think it’s a pretty good start. C&C please.

Current status: Texturing and sculpting are finished, and I have to tweak the materials and rig. 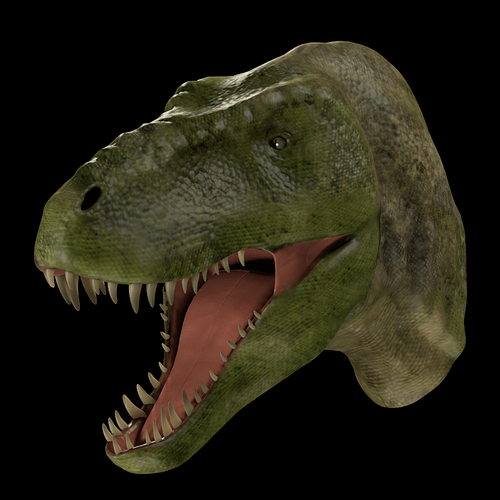 Nothing to say, but great work,
as is.

Looking good so far, however I think the eye should be a little larger and have a more deeply recessed socket. In general I would say that the details should be a little more sharply defined (i.e. the bumps along the brow ridge, the creases between the jaws and whatever the skin in between is called and so on). Of course this is all based on my possibly entirely innacurate mental image of what a T-Rex should look like, so use your own discretion!

Ok. Now I KNOW you are Dinocrazy.
(Its ok! I am too, hehe… I have a realistic Dino Mural on my bedroom wall XD)

(Its ok! I am too, hehe… I have a realistic Dino Mural on my bedroom wall XD)

I had one on my bedroom wall for around 15 years already, since I’m 23 now I’ve been given the suggestion that it could be painted over with another color or a different mural, but I still think it’s fine the way it is.

I also have over 200 plastic dinosaurs that I used to play with, all of them still either standing in my bedroom or tucked away in a large bin.

Thanks everyone for the suggestions, I made changes and sculpted the whole thing. I also added an alpha map and then baked it into a normal map. I’ve run into a problem - there are visible artifacts where there are seams in my render. How do I fix this?

Looks nice, can you post a wireframe? Also, it doesn’t quite look like a Tyrannosaurus. It’s pretty realistic for an allosaurus or something, but usually T-rexes have a wider head with more defined eyebrows and that area in general - also their eyes face forewards. Otherwise, looks fine to me.

Looks nice, can you post a wireframe? Also, it doesn’t quite look like a Tyrannosaurus. It’s pretty realistic for an allosaurus or something, but usually T-rexes have a wider head with more defined eyebrows and that area in general - also their eyes face forewards. Otherwise, looks fine to me.

I’m going to have to disagree. I worked very closely off of a Tyrannosaurus skull reference when modeling this. The Tyrannosaurus eye is also actually facing forwards, thought the lighting does not show that.

Here is the tyrannosaurus with a normal map applied. 27000 polies. 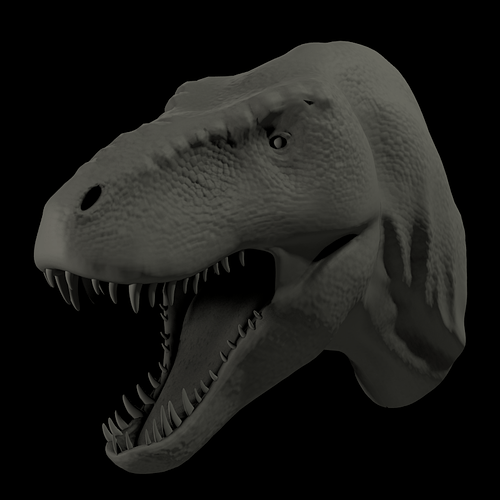 With texture and sloppy SSS: 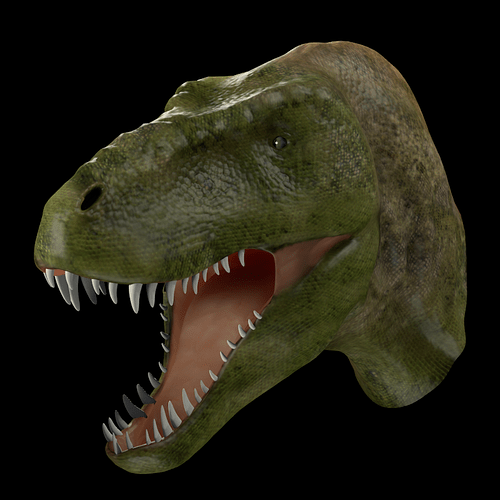 Excuse the badness of the SSS, I have yet to figure out how to properly apply an SSS map or specmap.

I’ve made two separate materials to regulate the SSS and spec for the mouth and skin. I’ve also added a texture and SSS for the teeth. Unfortunately, in screwing around with the SSS in the mouth, I’ve made seams visible. I’ll fix that.

Hey man, it’s a good start. I noticed your signature says to critique your T-rex head harshly, but I’m not going to do that. What I will say is even though it’s a nice start, it’s no where near time to render normal maps or mess with SSS or texturing. There’s not enough detail to begin that stage yet. Take these two images for instance: 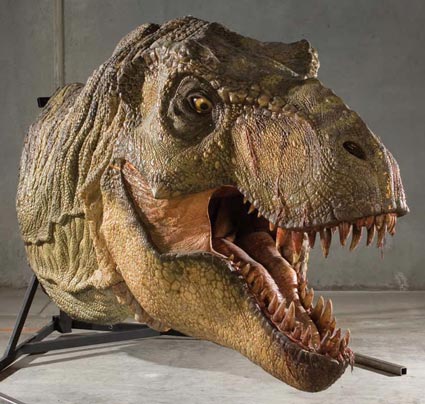 Right now, the head looks like a toy, especially with that SSS. It’s quite plastic really. You need more sculpt in there, more folds, bumps and wrinkles. You need to try to get a scaly skin effect going around the mouth, and you need to define the brow moreso. The neck should have wrinkled skin, and the gums are just too thin for those teeth. While I could touch on even more, you should have enough right here to go with. You want to improve in your dinos, well, let’s see you revamp the good start you have here.

PS I have to agree with Owldude… the brow needs more refining and those eyes are too small. While we truly don’t know what a real T-rex looks like, Jurassic Park set a standard that all of us dino modelers must adhere to. We have some leeway, but it should look similar in the end.

Thanks for the detailed critique, Kris. I agree with most of your points. Do keep in mind that I wasn’t planning on creating a Jurassic Park Tyrannosaurus but rather a more realistic version like this: http://swordlord.cgsociety.org/gallery/802503/ I’m going to have to restart regardless and most critiques will carry over to the realistic version but I’d like to make my intentions clear. Time to start over.

Who’s to say which is realistic? They both seem pretty fantastical since we have no idea what they look like. Either way, even the link you gave me has more detail than what you did. You got it on the restart though. I know it.

Who’s to say which is realistic? They both seem pretty fantastical since we have no idea what they look like. Either way, even the link you gave me has more detail than what you did. You got it on the restart though. I know it.

I didn’t mean to imply that I disagree with you on your critiques. I agreed with all of them. I only disagreed with your statement that all dino modelers must adhere the JP standard. The Jurassic Park Tyrannosaurus was created to be extremely fearsome while the link I gave you is more realistic in that it adheres to the skeletal record more. Even it embellishes the skeleton a little bit, but it’s probably the most accurate one on the internet.

For the record, here’s what I consider to be an accurate Tyrannosaurus. It was on display at the Chicago Field Museum(home to Sue the Tyrannosaurus). It’s a bit of a shame that I didn’t get really good reference pictures of it. 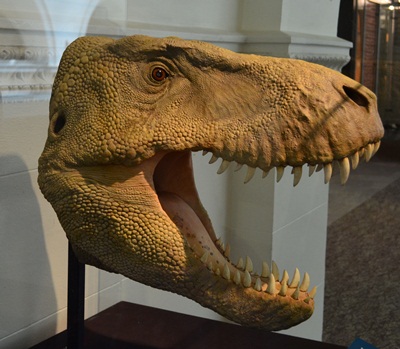 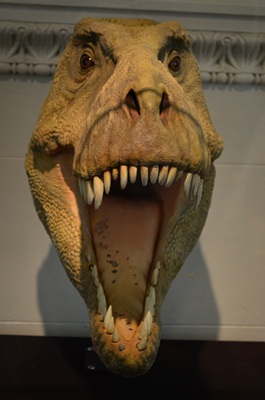 Hmm, if that reference is from the home of Sue then I’d trust its accuracy - but if you’re trying to make a piece of art, then I’d do everything to find a cool looking reference. Kris’s post is one of the few truly attractive sculptures I have seen of T-Rex. If you can’t find a good reference (though Kris has just found you one) look to Jurassic Park, it’s awesome. As for your texture, it looks great! You spent a lot of attention to detail there with the individual dots and miscolorations that few of us could recreate in the competition. Well done! Though I agree with Kris that the material itself could be better.

I understand that I am creating a piece of art and that I should exert some level of artistic license. However, the look of JP’s Tyrannosaurus is very distinctive and not the look I would like my Tyrannosaurus to have. I do agree that the physically accurate Tyrannosaurus is somewhat boring. However, while I plan on exaggerating some features on my Tyrannosaurus, I feel like Jurassic Park’s rendition, as beautiful as it is, is not one that I’d like to copy.