Hi guys! Since I think i need to learn a bit more about decent topology , rigging and sculpting, I’ve started to model the classic UFO Robot Grendizer.
I’ve started yesterday evening, now I’m aiming to complete this base mesh and then I’d like to rig it and eventually to sculpt it to add details.
To be honest I’ve started with a Gundam, but the lack of decent references lead me to this simpler giant robot (my neighboor is a 70’s robot anime super supporter, so I could go and take a bunch of reference photo of his robot). Great work !
Bring me some nostalgia, as it was a major TV serie for kids in my country for its time, i remember it fondly from my kid years back in the end of the seventies/start of the eighties, the serie and that robot were renamed Goldorak here.

Only critic i can say on your screenshot is the big grey axes that inserted into the upper body of the giant robt, near the shoulders seems to be deformed.

yeah, you are right, I guess I’ll have to work it a little bit more, I’ve tried with a srinkwrapped bezier curve but when I convert to mesh it doesn’t work so well, ahahha.
In Italy it was called Goldrake , when I asked about it at my japanese teacher he didn’t know what I was talking about, ahahahaha.

That japanese teacher must be too young to remember 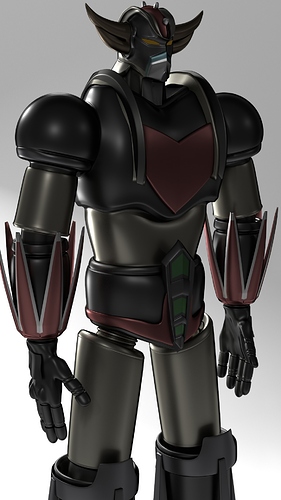 And there we go, a first test render with basic light and shaders.
As you can see , I still have to work on the shoulders ( I have to think about it a little bit more ), but the overall look is ok and I like it.
Next steps:
1-Fix those shoulders!!!
2-UV Unwrap.
3-Pass the model to substance painter and try it a bit.
4-Once I like the texturing I’ll try to rig it.

Eventually, I’ll try to use this as a base mesh for sculpting.

I bought a Grendizer manga 2 weeks ago (got to start reading it at some point) and it’s nice to see it here.

Sanctuary > Grendizer is called Goldorak in France and Quebec. No wonder defmaka’s teacher was at lost when asked about Goldrake, which is a name specific to Italy. My brother in law, who’s japanese, laughed and wondered why Captain Tsubasa was called “Olive et Tom” in France: “there is no Olive, let alone Tom in that anime!”.

Hi Jools, thx for you feedback.
The hands are an issue, I know: I’ve tried to found some good reference but I could not ( I don’t want to bother my neighboor again ) , in some of the image I’ve found on the internet they seem more rounded and bulkier, I guess I’ll try to add panels and work on the materials.
For the bolt thing, it’s due to the reference: I’ve used a reference from a metal toy where the bolt is visible. Checking out wallpapers and so on I’ve seen it’s as you suggest, the leg goes up to the hip. 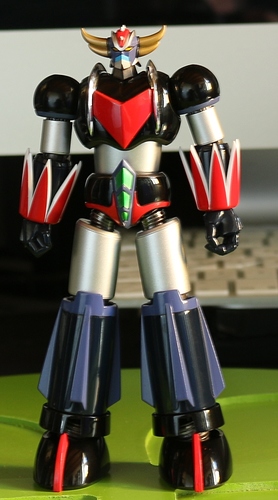 I guess the sharpness of the edge is again due to the reference: I’ve seen that drawn images thend to aver a more hard surface look , while the toy tend to have more rounded edges. However, in the last render I’ve added a few edges in the face region to increase sharpness.

The last render has some materials and lighting reworked. I’ve used an inverted ao pass as a factor with a light blue effect set on overlay giving it a bluish tint I like.

MAN, IT’S BEEN SUCH A LONG TIME I WANT TO DO A GRENDIZER ! It’s one of the main reasons I put myself in Blender. I hope you make something good. It looks fins so far but please don’t forget to put scratches and “usure” (in french) on the metal. I’m sure you’re full of references images but maybe it could help. I will follow your WIP with a lot of intesrest. One day I will make my Grendizer but I want to do it so good to make a short movie. Maybe it won’t be me that will make it but I want a Grendizer movie that is badass. Not the "fulguro poings " so cheezy. It will kick ass!! In France and Switzerland (french part of course) Grendizer is known as “Goldorak”. .-) I used to watch it as a kid even if there was a lot of stuff I didn’t like but the best part was always when Actarus runned in the hallways, took the pod to jump through that waterfall and turned himself in the pilot suite, landed on the cockpit and said “trasnfert”, and the way the sit used to turn around in all directions was stupid but so cool at the same time.

Nice to see so many people remembering that old serie, i feell less old

There’s some good progress , i am a bit disturbed by this part : Mostly because it’s not how the actual robot was designed in the tv serie (that is similar to how original creator of the robot was drawing it too ), i see that your reference photo has it too, but it’s not part of the original robot design.

The robot actually has continuous leg-hip section, a bit like if he had underwears and the legs were coming out of it.
The original line of toys that existed in my time were more accurate to the tv serie reference, and so unfortunately had those upper part of the leg impossible to bend too.

But that’s just nitpicking, it’s OK to get creative instead of trying a carbon copy of a reference

Hi guys, thank you for your feedback!
In these days I’ve worked mainly on technical stuff (uv unwrap the model, lighting setup , testing reflections wth a new addon from blender guru). Tomorrow I hope I’ll finish unwrapping the model so I’ll be able to work on the grunge, dirt and damage part using some mask (now the model is too clean). Talking about the leg joint, it’s not a problem to rise it up, but I wanna first check how it deforms when I rig it.
I’m still unsure about the use of substance painter for this project, however first comes the unwrapping 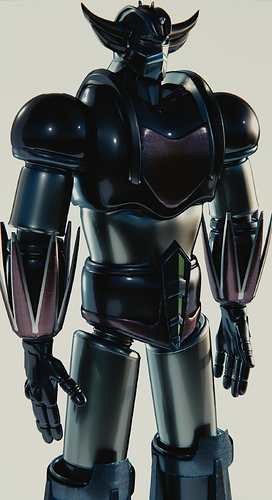 There we go with some new test shader I’ve worked on today. The base is the glossy metal material I’ve used in the previous render with pointness for edges, normal for dirt map and a tweak of the normal texture for displacement.
For now it’s just on the red and purplish part.

Here you can see the node setup, even it’s a bit small and don’t know how much is readable: 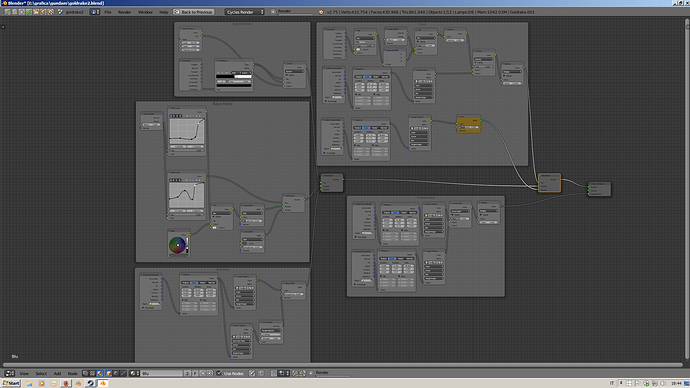 After finishing this setup for all the materials, I think I’ll have to fix a few issues ( pointiness is not working well on the chest piece , probably need to give a new material and tweak color ramp; maybe I’ll redo the wrist spikes for better topology and so on) and to think about some texture improvement.

And here with all the materials updated. Tomorrow I’ll tweak a few errors ( too much dirt on shoulders with some stretching, for instance, green lights on belt and the eyes emissions need to be fixed to pop out better ) but the overall look it’s not bad.

Add some big round servo motors to the hip and leg joints.