How are you? I am trying to create an animation which I’ll use during a Powerpoint presentation about ultrasound physics however I am quite inexperienced with Blender. The idea is to animate sound waves, which will hit an object and reflect back. I’ve created a nurbs surface and duplicated it three times, placed them equidistantly from each other (this represents an ultrasound pulse, consisting of three waves). A box is used as the target object. Here’s the basic scene: 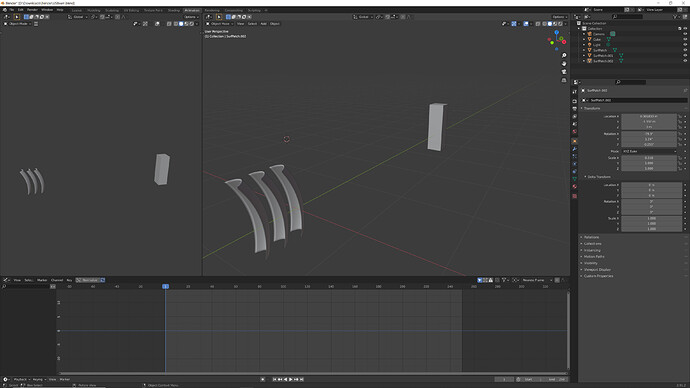 You can animate one, make two copies and change the initial positions of them at the first frame of the animation and then just adapt the keyframes of the rest of the animation to correspond to the effect you need.

You don’t need to animate each one.

To reflect it? I would think about handling this with a lattice: 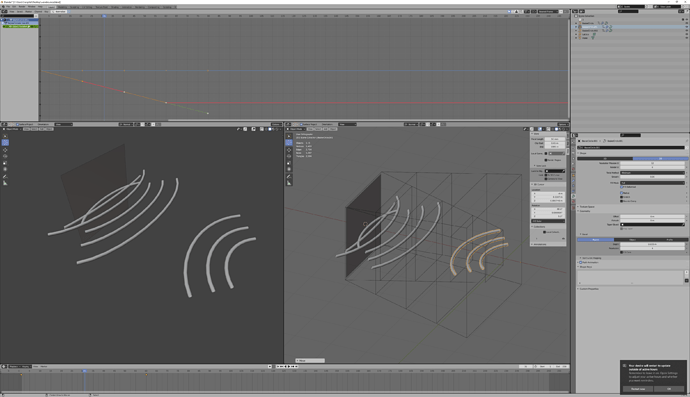 Notice the interpolation mode, to give it a sharp bounce.

Good. It’s not even necessary to make any copy.

Thanks for all of the suggestions and also the blender scene file. I’ll try to examine and learn it. Meanwhile, I cheated yesterday a little bit and created the following animation:

This probably isn’t the correct way tp do it, as I’ve created a second set of 3 waves, rotated 180 degrees, and hid them inside the object from which the sound wave is reflected from, made them invisible (by setting a 0 scale on all three axis), made them visible the moment the incoming wave hits the object, then moved them through the same orthogonal path, by calculating the distance a single wave moves every frame. It works for this specific case, but would be harder with a thinner object, or if there are multiple objects (on the same line of sight), which will be required for my second animation scene.