Greets,
I recently finished more or less this waterscape, but I’m not completely happy with everything in it, so would appreciate some suggestions:

First one is technical: it took ages to render this, and more than 10.000 passes to get the noise on the bright artefact to settle… There is environmental volumetrics, and bright object in the middle (the object itself is hidden from the camera) The main thing I wanted to achieve are the beams of light coming from the artifact. The effect could be stronger, but my main concern is, is there some trick to make this kind of scene with bit less rendering effort. This one took so long to render that I’m unlikely te repeat it again like that.

Other is lightning and colors: I’ve started to notice that nearly always my problem is to leave images too dark, and maybe somehow too homogenous. I usually realise this when looking small thumbnail of my pictures and noticing they look mostly black, without any clear forms. So some tips how the lightning and/or color distribution, or maybe setup, highlighting of some aspect or another? General ideas how to make the presentation somehow more striking?

Underwater feeling is one thing: Some ideas about ways to enhance that feeling would be appreciated, also some pointers or ideas if there would be some tricks for this either in blender, blender postprocessing or later.

Anyway here is the post-processed version 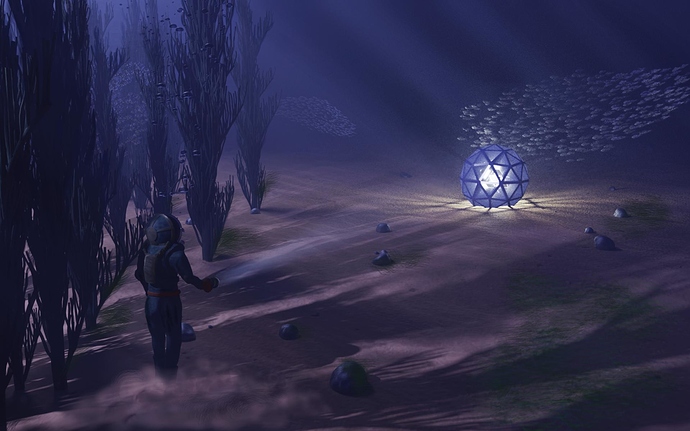 And here the original render 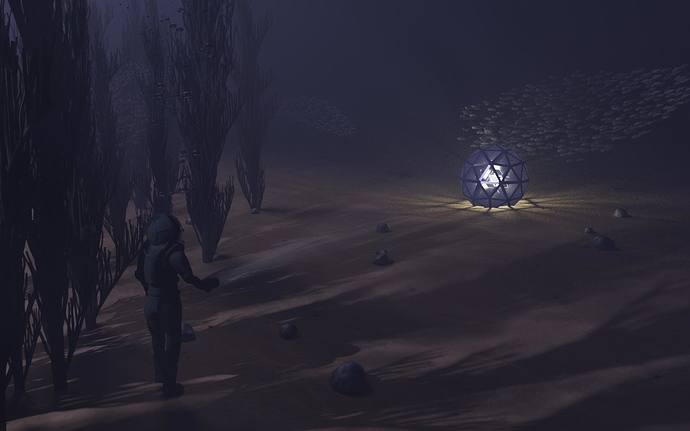 Anyway, due to the first problem, (namely needing to render 48 hours or so) I probably can’t implement suggestions requiring other than postprocessing in this image, unless someone can come up with clever idea of reducing noise from a setup with such bright object. Postprocessing tricks I could try on this one, and any other in what ever my next artistic project would be

For the post processing, consider using the light beams filter. You can fake volumetrics with the mist pass, but this will give a less accurate result, leave out effects like bloom, and produce artifacts on glossy surfaces. If you don’t want to fake volumetrics, tick “homogenous” in the volume shader if you haven’t already, because that drastically improves render times.
I think the seaweed should sway a little, too.
You can also turn off some light paths for certain objects. With a setup like this, every light ray from every source needs to be reflected and refracted many many times. But if you, for example, turn off all diffuse and glossy rays from the seaweed, there’s a lot less light to calculate, and the difference might be so subtle that it’s not noticeable (Can you really see the very faint light that it casts on the ground?). You can also turn off caustics (less realism, much faster render), decrease the light bounces (sometimes you don’t need global illumination), use multiple importance sampling, or hide some of the noise with post processing (defocus filter, custom bloom filter, etc.). If you’re feeling extra impatient, you can also render a brighter image (which is usually a lot less noisy) and then darken it in the compositor. I hope my tips will decrease your render times.

Thanks a heap. There’s a lot of things in your answer I need to try out, which I haven’t even thought of so much, like turning of those light paths. I’ll try these out in coming days and tell what I find out

Love the idea you have here, sorry I just could not resist, made myself a screensaver :o 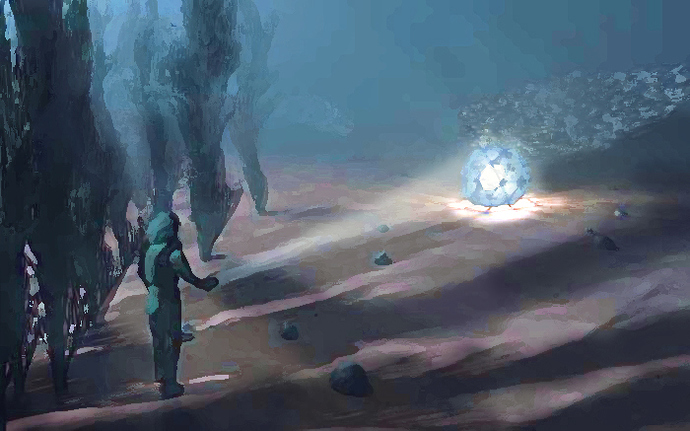 Nice to hear it inspired

Nice version, the effect you have applied works great for the plants. Did you use some specific filter for the effect in Blender or in some other program?

Done in PS, played with screen, saturation, levels and added a paint daub filter. Also used liquify to move the plants around a bit.

For rendering use a render farm e.g. sheep it its free and supports single frames. The only down side is that composting is not supported but will be added soon I think