I am having some unexpected results with the curve modifier for a curve in the y-z plane.

I have a blend file attached and two screen captures.

I also have a curve named NurbsCurve which is in the x-z plane and it modifies the object along the x axis as I would expect.

I have tried rotating the curve and then applying the rotation. I have tried avoiding the curve rotation and simply move the control points in 3d in edit mode. I’ve looked at the curve tilt but don’t really know if I can make a change that would apply. I looked at local vs global coordinates but I’m assuming that applying rotation would align the two and the experiment of not rotating the curve would mean the local coordinates wouldn’t have changed. I searched articles and the posts on the message boards but am still unable to figure out what’s happening.

Does anyone know why the curve is apparently rotating my object as the curve modifier is being applied? 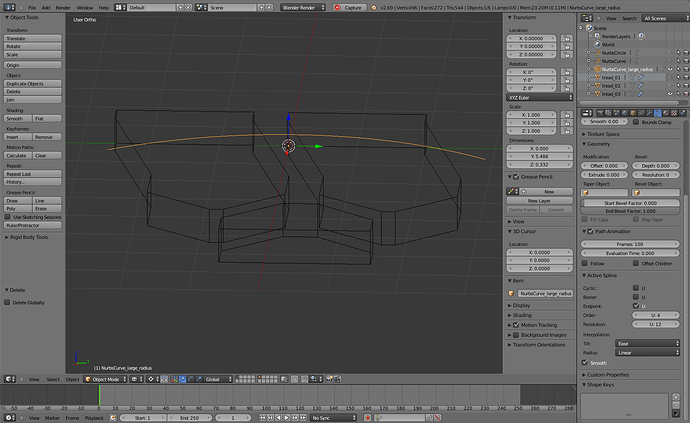 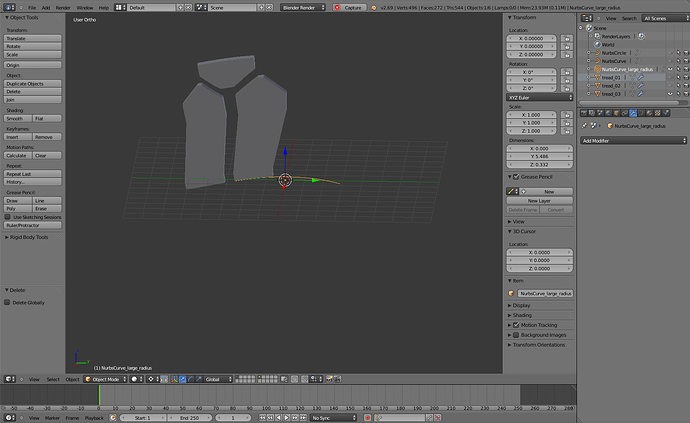 Tilting the curve 90° solves the problem. (Ctrl+T > 90 on windows).
The modifier needs two directions to compute the deformation: the curve’s direction and its tilt.
The object axis you choose in the modifier (object Y in your case) will be aligned with the curves direction.
With this constraint only, it’s easy to imagine that the object could then “turn” freely around its Y axis, while still having the Y axis aligned with the curve direction. Blender needs to make some kind of parameter to block this degree of freedom.
This is done using the curve’s tilt, which is used as a secondary axis to align your object X axis. You can view the tilt axis as being perpendicular to the arrows (normals) of your curve.

The order goes this way: