Everything was going fine, I just started a new project, I was making a new material which was coming along great (pic #1) and I started blender up and the nodes randomly stopped working (pic #2). my set up consists of an sss material which is darkened by a ray-transparent material to give the illusion of tubes in some sort of embriotic fluid. I began testing to see where the problems were stemming from and it looks like some strange codependencies in my (intended) independent contributing materials, namely the sss and ray traced materials (pic #3).

is this making sense?

I boiled it down to the displayed settup; and oddly enough, even though the sss material links straight to the output node the render there is deffinate interference on the part of the other non linked node. The sss material node is only that and nothing else… that is true, but why can I see information being projected onto the material from somewhere else and why the heck is it so bright all of the suddon!

If you notice, the first settup shows the unlinked node as a orangish sphere with a white ring, if i delete it and add the material node anew, it shows up as it is supposed to: with a clear alpha center (pic #4).

Now if I delete the ray node all together, I get a render which shows the sss material for what it is supposed to be (pic #5). This was all working yesterday! What the heck is going on? has anyone found this to be a problem with their work or have you found a way around it?

any possible help would be much apreciated!

would a .blend help? 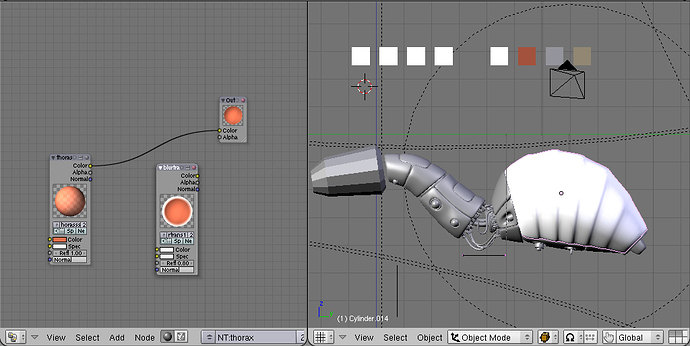