I have a pane of glass with an ‘etched’ circle in it (using a boolean difference operation with a tube). As a static picture it looks OK but as soon as you render a movie with the camera moving the etched area shimmers … like crazy - it’s like the refraction and/or reflection and/or ray tracing calculations for the etched faces keep flip-flopping frame-by frame as to what should be shown … reflect light, don’t reflect, refract in this way, or that etc. Playing around though with the various settings makes me think it’s a reflection problem. I would understand it if the shimmering was predictable and slow with slow camera movement but it isn’t. I’m at a bit of a loss really.

This is the second time I’ve had this shimmering problem. The other time it was just on a flat surface.

I’m tried to use a UV map to fog/smoke the etched area (like it would probably look in real life) to mask it but it’s still not enough to hide the shimmering. Any thoughts anyone.

P.S. I’m relatively new to Blender so I hope this all makes sense. Hopefully a Noob question! 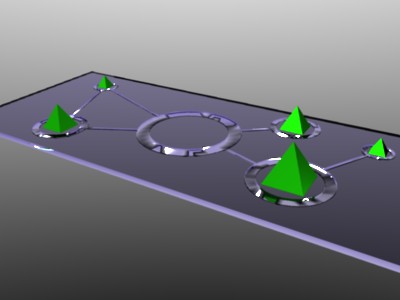 It looks to me like you have ‘normal’ problems

[edit]
Oh, and by way of explanation. The face normal (you can display them from one of the Mesh Tools panels) points away from the center of the object. That is, there is an ‘outside’ and an ‘inside’ to every face. Since Blender can’t possibly figure out with 100% accuracy which side is which when you create a new face, it tends to get some wrong.

I had forgotten about the normals. However I checked them and they were all OK. There were some doubles around (30) but removing them had no effect (as you would expect).

It was only when flying around the etched ‘trenches’ checking out the normals that I noticed that all the etched faces were reflecting differently to the glass pane surface which was set to smooth. So indirectly you helped me to find the problem. 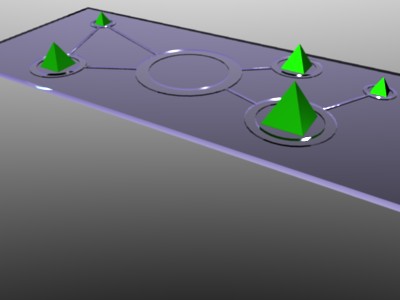