I’m new on this forum so let me introduce myself. I’m a animator working in France, I’m usually working in 2D animation but I’m starting to develop little projects in 3D. I’m trying to use mainly Camera Mapping so I can mix 2D and 3D animation. Anyway, I’m learning via tutorials and forums so I still have to learn the basics.

Anyway I have a question to ask about textures. I’ve been doing some camera mapping recently and I managed to create some scenes that suited me. Here is an example:
http://reineke.fr/perso/test_carton.mp4

The thing is, I’d like to export those scenes in Unity 3D. As I tried, i realised that i could only import the 3D model but the UV mapping was not exported as well. I’m trying to find a way to keep the texturing made in a Camera Mapping in Blender in Unity 3D.

I thought of a solution and that is where I need your help and advices. I thought maybe I could try to export the textures in Blender as a TIFF or a PNG that could be used as a texture in Unity 3D. Basically, I’d like to know if there is a way to “unwrap” the texture as it is projected on the object as a basic unwrapped texture like this:

I’d like then to export it as a PNG or TIFF and use it as a texture on the object on Unity 3D. Do you think there is a way to do this? If you know, please don’t hesitate to tell. Even giving me a link to a tutorial would be phenomenal for me. 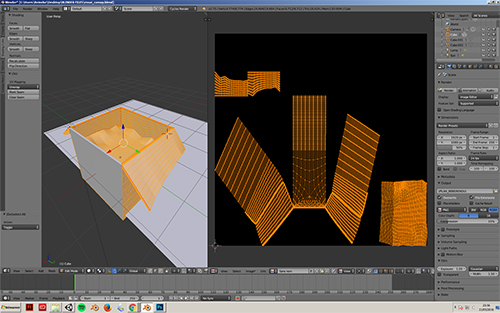