For the past 3 months or so, I’ve been immersed in a project with a North Korean ministry called “Cornerstone Missions International”.
I was responsible for basically everything visual, from character creation and rigging to animation and editing. I’ve used Blender in just a small modeling capacity with them before, but this is the first project we decided to do in full 3D. As such, 99% of all work was done in Blender, and as such, I thought it’d be fitting to share here.

Because of limited time I couldn’t push the project to a level of my satisfaction, but I’d say it’s overall passable. There’s a bit of content I’d like to share, so I’ll divide them up categorically into a few posts.

For the animation, I decided to go towards a cel-shaded look with black outlines. But I wanted to do everything in the viewport to cut render times, so it feels like it’s been workarounds galore.

Here’s an example of one of the assets, a Gorgonzola Cheese pizza: 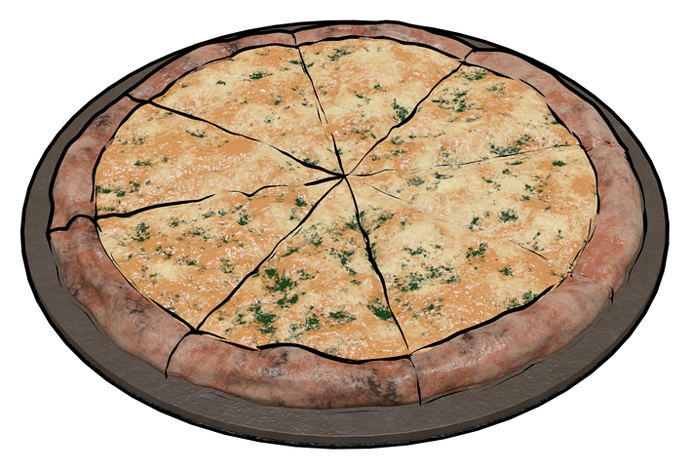 The final video actually isn’t out yet. Watch this space for the final video, which I will post once it is published.
But for now, check out the posts below for more content.

*Edit: The final video is out:

For the animation, I ended up creating 11 characters, though some more major than others, but all rigged and ready to go. Here are 10 of them (though one [the little girl] ended up not being used), though the remaining one will follow below:

The main character was the “greedy woman”, as we’ve come to call her. This is her in the above video (Unsurprisingly, the first character): 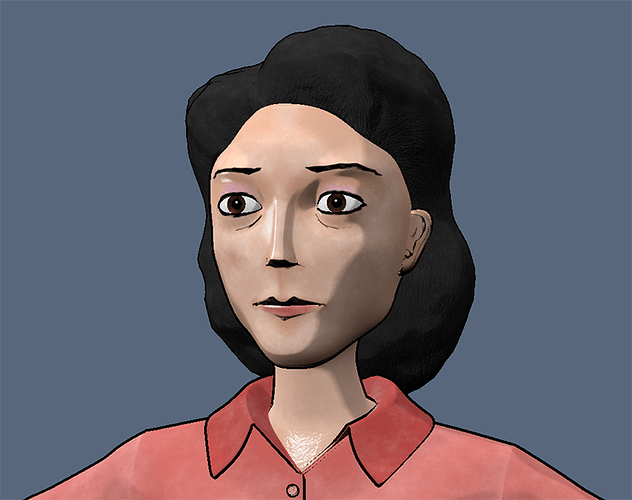 I used Rigify to create the body rig, but created my own facial rig. I had many characters to do, and after some research and tests, what I decided to do was create one face that I duplicated and modified (geometry and texture) for the other characters. The system wasn’t perfect, but it was relatively versatile.

Here is an example of the same face geometry/rig repurposed for another character, male North Korean “SSB Agent”, (the one that wasn’t in the video above) in a demo for the facial rig:

There was a downside to this that I discovered later on, which you may be able to note with the jaw movement.

When I was doing early tests, I thought when I completed the facial rig, I’d have no problems modifying bone positions afterwards, but this proved to not to be the case. I don’t know if it was the drivers or bone constraints (or a combination of both?), but trying to move, say the jaw bone, in editing mode would deform the actual geometry so I ended up leaving it alone.

This post is the sets. I had 6 sets I needed for this animation. 4 were brand new, but 2 (prison and interrogation room) were modified and reused from a previous project. The reused sets were initially made for use with Element 3D in After Effects and some work needed to be redone, especially in regards to texture, to be used for viewport rendering in Blender.

Below are screen recordings of the sets.

First, a restaurant and the “greedy woman”'s room in North Korea (2/6):

The weird black fuzz you’ll catch in the interrogation video is due to the viewport ambient occlusion, which behaves oddly with transparent texture on the geometry… basically, it seems to treat the geometry as if it’s fully opaque. Which was a shame, because I ended up not being able to use texture spotlights as I intended out of Blender and ended up doing it in After Effects.

The only object I didn’t create were the trees, which I got off of Blendswap: [Low Poly Foliage]

Oh, and textures that I didn’t create myself were seamless textures gotten from cadhatch.com, mysitemyway.com, seamless-pixels. These are all free to use textures without need for attribution for personal and commercial work.

Outside of the characters and sets, I also needed to create various objects and food items.

First, what I guess could be considered the “star” item of the animation, the Gorgonzola Cheese pizza, in video form:

Next, the food items on the table in the “greedy woman”'s room:

And some others in picture form. One, the Bibles:

I had to create two versions, one open and one closed.

Second, I guess this would be called a knapsack: 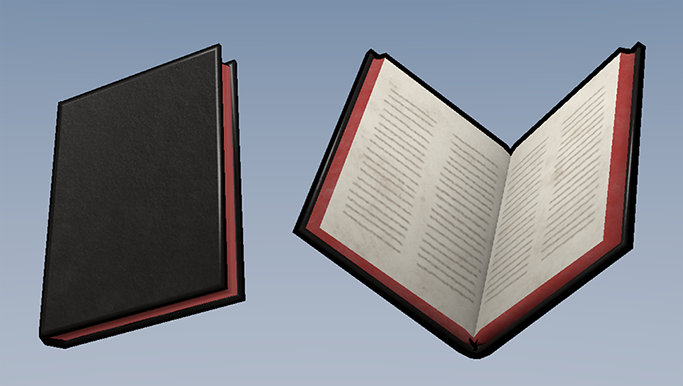 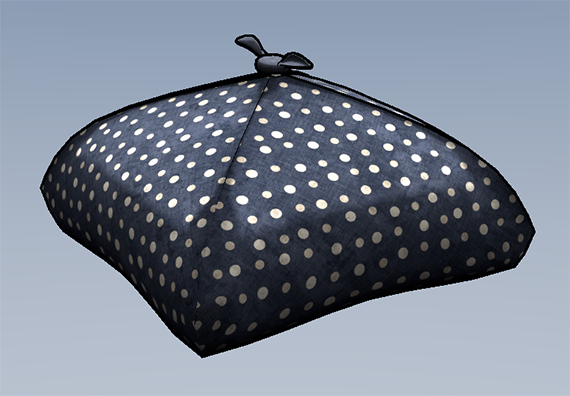 I really like the cel shading you’ve achieved with this. Just reading your last note though, you can save textures into the blender file by packing it in. Go to File > External data > Automatically pack into .blend.

I really like the cel shading you’ve achieved with this. Just reading your last note though, you can save textures into the blender file by packing it in. Go to File > External data > Automatically pack into .blend.

Haha, yes, I am aware of the packing feature… though, aside from the file size bloating concern, that also won’t help especially the first-time users who get no indication at all that the common sense expectation of file save does not save the hours of texture painting work. And the next time they open that file… they’re in for some rude awakening. =/

Very impressive work here … Thank you for showing it.

Thanks, everyone! Was really busy for a while and forgot to update this thread, but the final video is out that you guys can check out:

Not at all my ideal quality of animation (due to time constraints)… a little embarrassing to post actually, haha. But I thought I’d show the final here in case anyone’s interested in the end result.

One of the sad stories. we do not hear so much about…The story made Me sad…So You have done a very good job here…!!!

You should not feel embarrassed…It’s a amazing work You have done, I like all off it…Thank’s for showing it to us all…Puff Puff