I have this character (Sintel) walking forward (not just on one spot) for 50 frames but I want the cycle repeated a few times. So I went to the NLA Editor and set the end frame in the Action Strip to 100 and end frame of Action Clip to 50 and the extrapolation to ‘Hold forward’.

But the figure walks up to 49 frames, then jumps back to frame 1 and starts walking forward again until 100 frames are reached (actually 99).

How to make the figure continue the walk from frame 50 instead of returning?
Help will be much appreciated.

If the forward motion of the figure is included in the NLA strip, then it will also repeat with the other motions of the character, which means resetting to the start of the cycle and thus jumping backwards.

One way to fix this is to make an NLA strip that does not include the forward motion, only the cyclic parts of the walk animation. If a number of such NLA strips are put in sequence, the figure will “walk in place”. Then, add the forward motion as a separate keyframed sequence that extends over the entire range of the repeated NLA strips and does NOT include the cyclic parts. This can be blended with the repeating parts of the walk cycle in the NLA.

Thanks for your prompt reply. 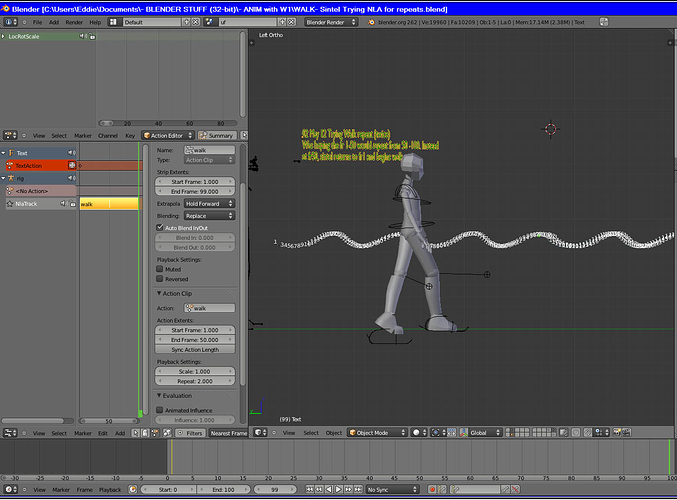 Your suggestions makes logical sense but I am not sure how to act on it.
I am attaching screen shot of the walk as well as the N panel in NLA Editor.

Chipmasq, could you possibly elaborate on the steps to take?

So the goal is to have two Actions, one with the character walking in place, the legs, arms, etc., all moving but no forward motion. The second Action is only the forward motion, and it covers the entire range of the walk, not just a single cycle.

The walk-in-place cycle is made into an NLA strip and duplicated as needed to cover the range of the entire walk, say ten steps worth. Then you have the option to create an NLA strip of the forward motion as well and place it in the Editor to blend with the cyclic motions. Now your character moves forward (powered by the second NLA strip) and also moves its limbs (powered by the multiple copies of the walk cycle strip). The NLA Editor is designed to combine Actions in this way.

I’m pretty sure it’s also possible to just leave the forward motion as an Action to run in conjunction with the repeating NLA strips. But I usually like to keep it all in a common Editor when possible.

Chipmasq, I cannot thank you enough.
I feel I can now follow your prescriptions and I also read something very similar elsewhere.

You have gone out of your way to help and not the first time either. You have helped generously in the past wirth ‘cloth’ problems.
Grateful thanks.