Using physics to pose chain: Not working out too wel...

I’m trying to use rigid body dynamics to pose a chain. (I’ve not used blender’s game-engine, physics or other simulators much so bear with me here.)

The idea is pretty simple really: Modeling and posing a simple chain is straightforward (as mr. williamson has pointed out for us, model a link, array modifier, curve, and ur pretty much good to go). But the chain doesn’t look realistic close up since the links are all nicely uniform and floating.

I had this epiphany and it went something like this: Hey! Why don’t I use physice to drop the chain? That just might work…

Or so I thought…er, epiphanized. As it turns out, getting the game engine to respect the chain’s right not-to-intersect-with-one-another-or-majically-come-unlinked-with-one-another is proving to be a daunting task.

My meager skills have taken me as far as they can and so I have come to you guys for help. Attached is the blend with my progress thus far as well as a screenshot of the failed simulation.

Here’s my approach: Each link is a separate object with rigid body dynamics (game engine) and compound triangle mesh bounds. The physics are baked to IPO’s.

Let me know if you’ve got a suggestion 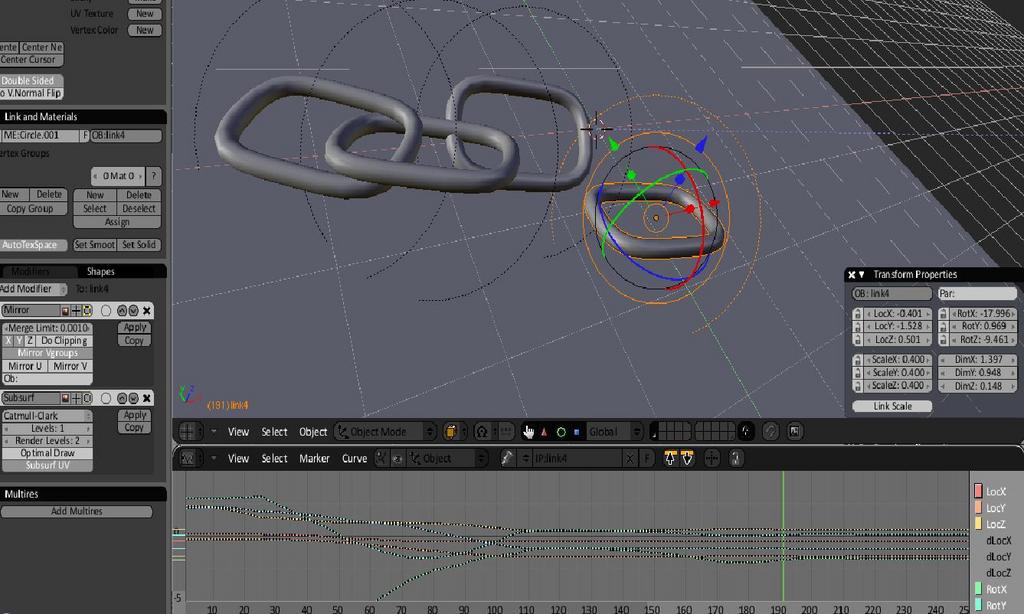 I haven’t looked at your blend, but I think your radius setting is too big. Try adjusting that.

After doing some testing…I just couldn’t do it with your blend. I don’t know why…I tried many different things. Physics was acting weird. I realized that it was because the frame rate in the game engine is 60 fps while the normal frame rate is 25 fps. Adjusting the frame rate makes it work much better.

Check out my demo: my_chain.blend

You can do ropes and chaines with rigid body join constraints too:
chain.blend (147 KB)
Please note that every second object is ghost to avoid collision with the intersection neighbors.

I tried with Sunjay’s file a rigid body join at one object and an additional chain intersecting the other. This looks pretty cool.