I am having an odd problem with a mesh, where the UV map is inverted from the layout, almost as though inverted to the Normal Map. I’m not the most experienced modeler, and really I am using Blender to make Paper models, but all the same, the inversion is making it impossible to map or model correctly. I would hate to have to redo the model, as it is in the format and form I need for the final paper build.

I have tried deleting the material and recreating the UV, reseting the UV, flipping the Normal (which gets the image on the correct ‘side’ of the model in X, but inverts the image faces (to the inside of the cylinder).

Any advice would be greatly appreciated. I am only having the issue with two objects in the model; the remainder of the object all show correctly. 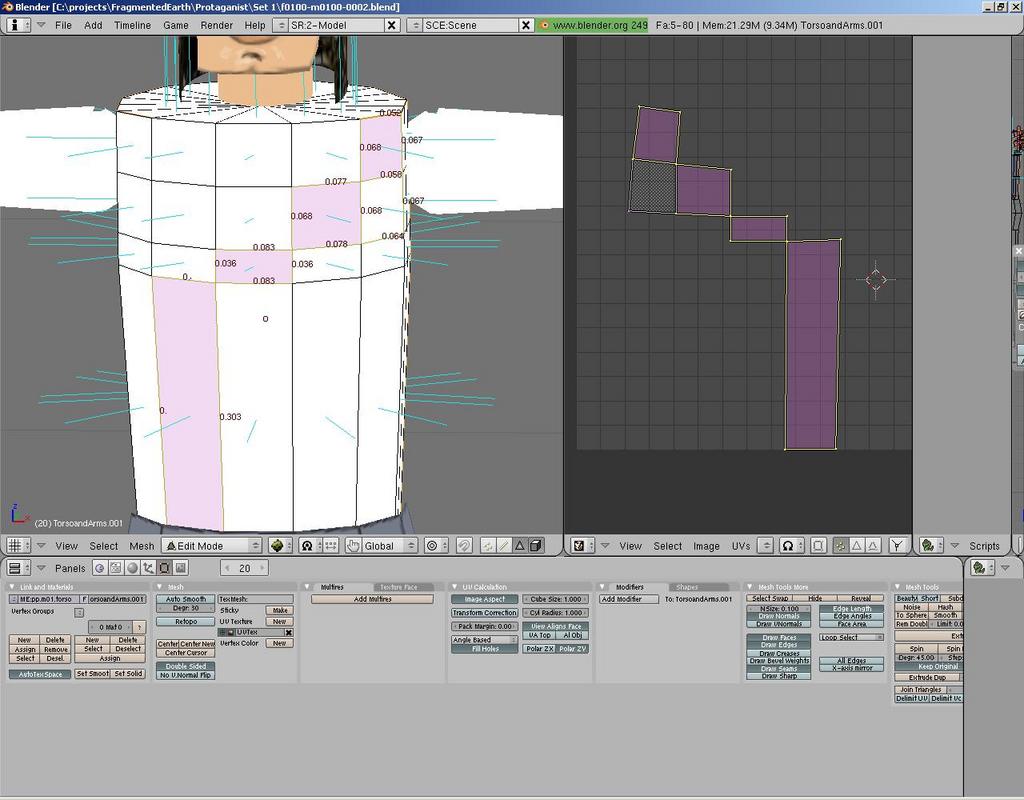 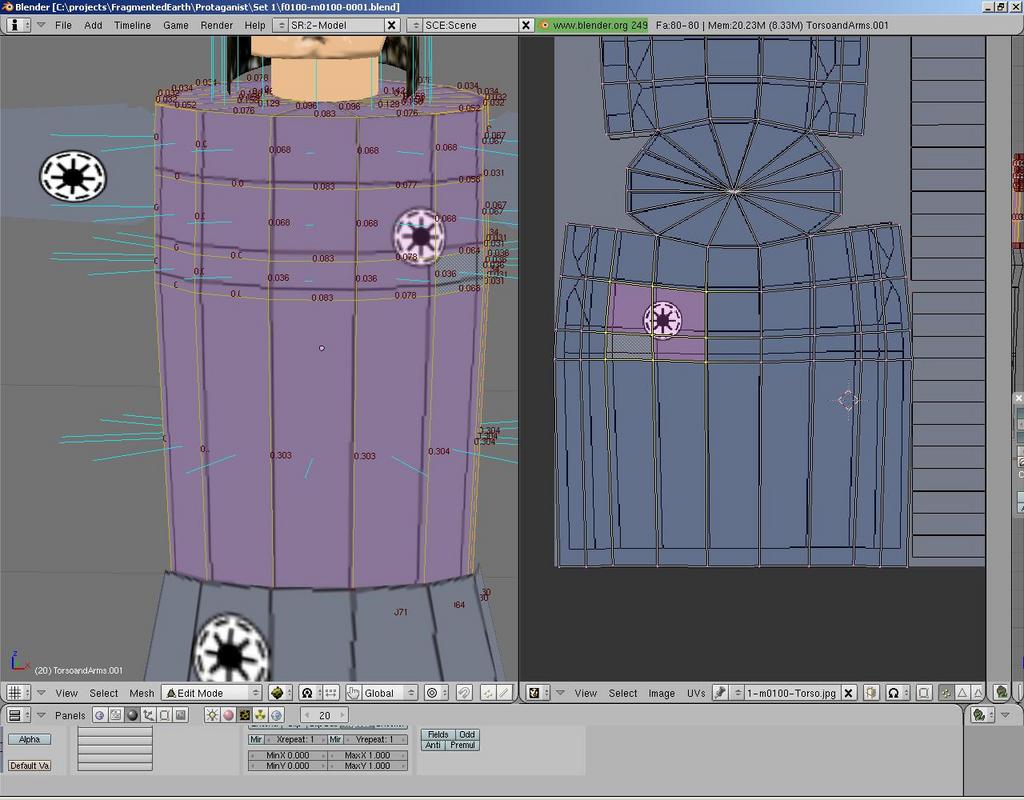 That worked for the Blender display of the UV, but there are still underlying problems with the mesh. I unfold my models by exporting them to OBJ format and opening them in a program called Pepakura. Even after Mirroring X, the mesh texture is appearing on the inside of the model (the opposite side of the face to the normal). I know this is not a Pepakura issue, as I literally made dozens of models this way; Only two of the objects in the export of the file I have displayed here are inverted, while the others are fine.

When looking at a UV layout, are the Normals not facing you relative to the screen? Is there a way to paint the opposite side of the face inadvertently?

Thank you for the time taken to review this,
Sean 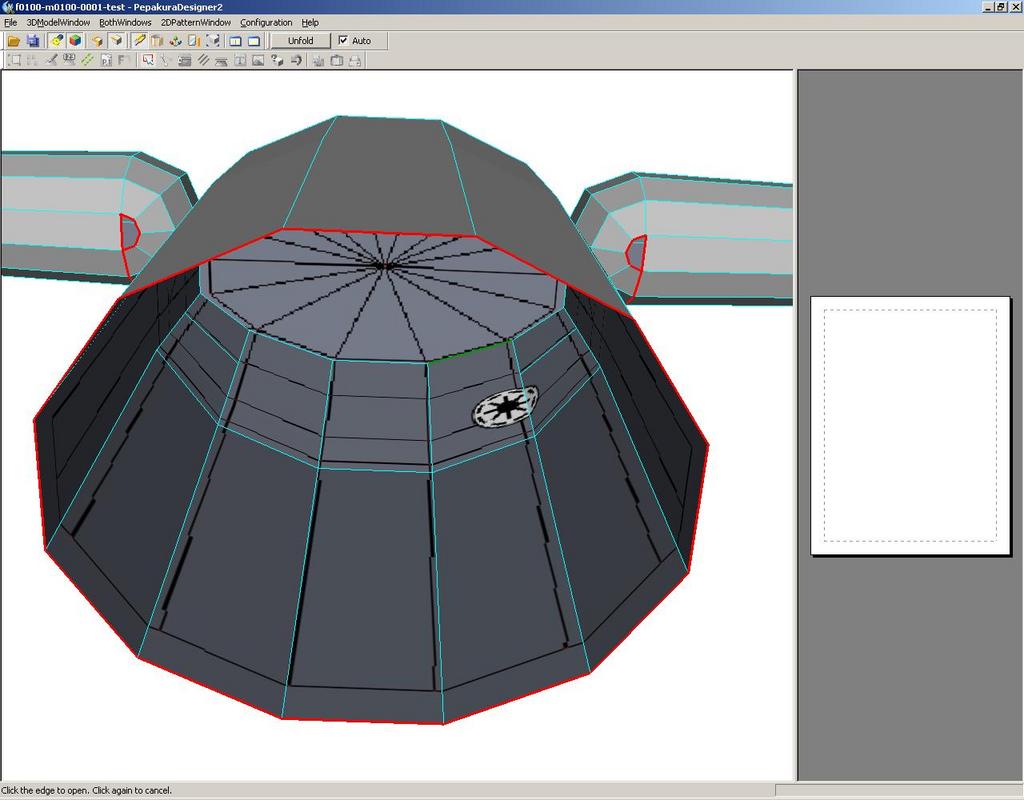 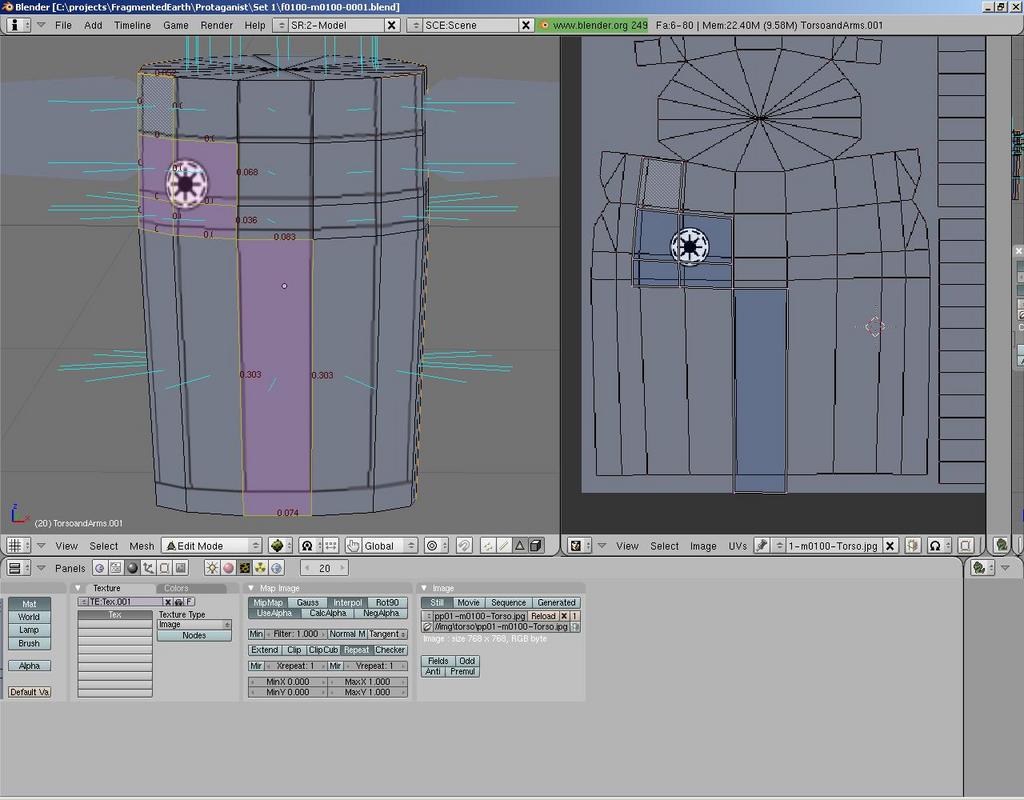 Sorry, I don’t have any further suggestion for you. Are you saying that the texture appears only on the backside and not on the front or is it appearing on both sides?

Perhaps if you could post a .blend file with the texture packed, someone could diagnose the problem.

Ok, I’ve played with a few things and I have figured a method to resolve the problem, although I’ve not discovered the root cause of it in the first place. I suspect there is a problem either with 1. Blender’s reporting of the Normal, or 2. the Export utility for .OBJ. Note that I am using 2.49.

I initially played with the mirror, as you recommended jrboddie1, and that fixed the Blender display of the texture, but as I noted, in Pepakura (using an imported .OBJ export of the Blend) the texture was still appearing on the inside of the model (inverted). I initially wanted to see if i could replicate it, and so I tried importing the .OBJ file into Blender and struck gold. (see attachment marked FunWithNormals-FirstImportOBJ). The normals were in fact inverted from the original Blend. So, in the interest of curiosity, I reversed the normals in the newly imported model, reExported it and then imported it again… The result is a corrected mesh. (see the file marked FunWithNormals-SecondImportOBJ).

I’ve can’t upload a 7z file, so I’m not certain how I can attach the UV’s, but nevertheless, the .blend file is there to review, and at least see the Normal switch in action.

Note that not all of the normals invert, only the ones on the Torso and Arms objects. 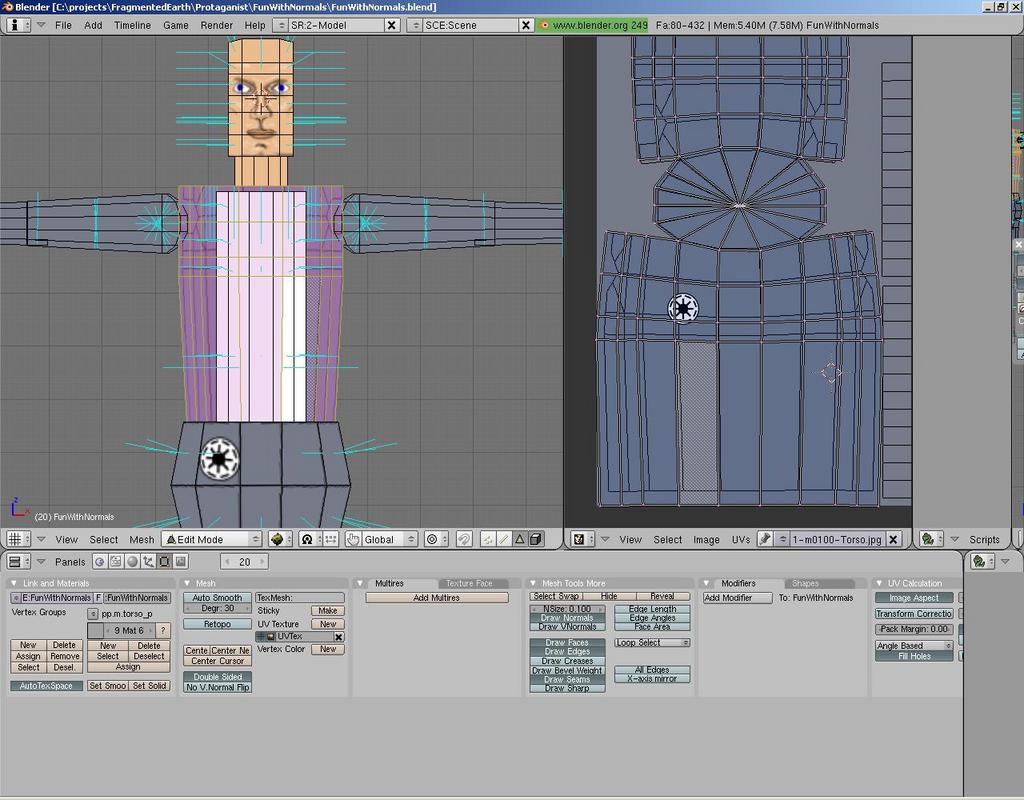 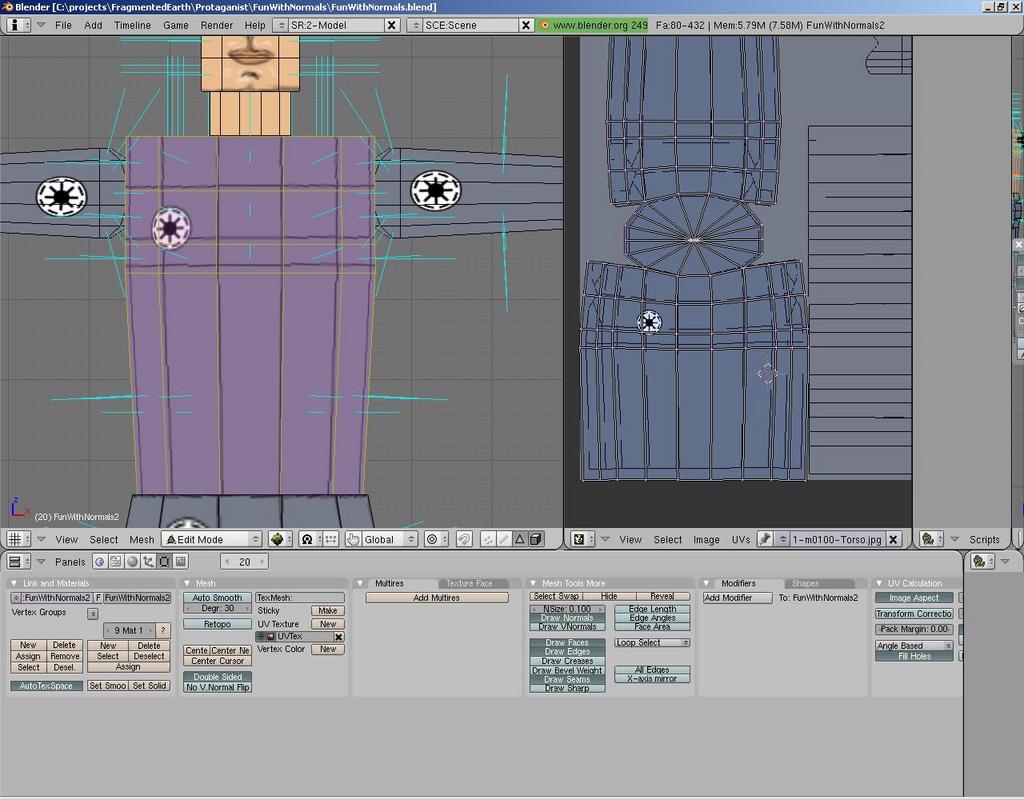 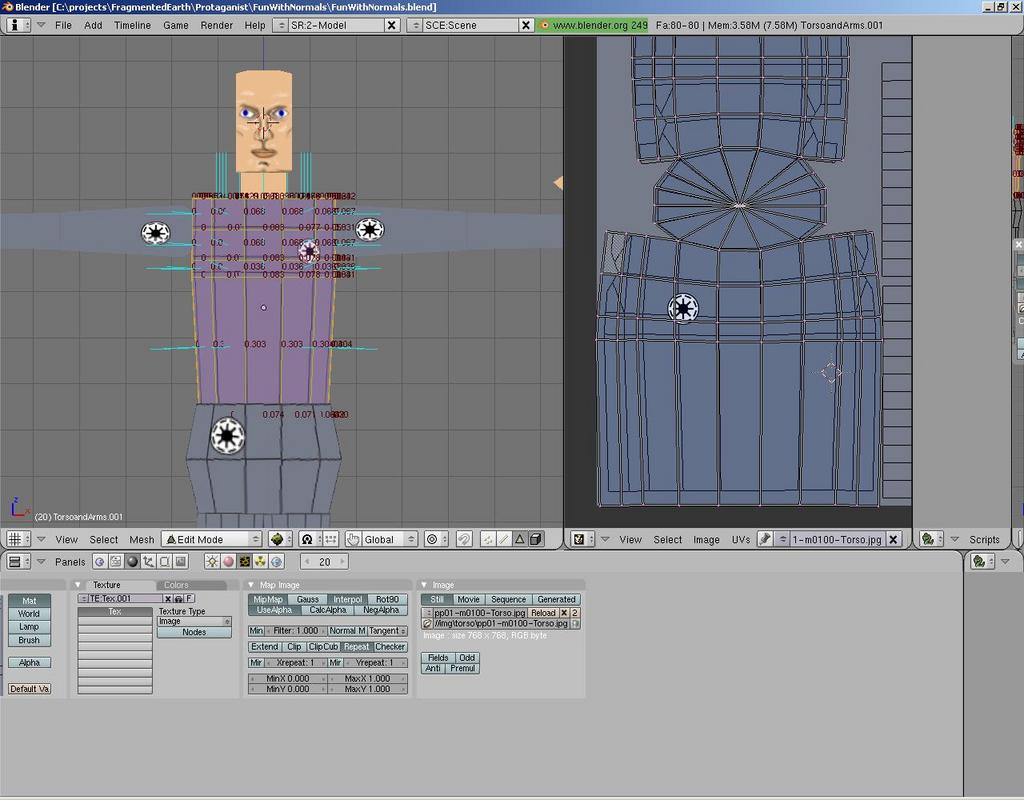