UV map has holes in it?

I have mapped a decal to my robot but find that the Gimp produced alpha seems to have holes in the middle. You can see the UV is all white and when I turn on alpha Blender doesnt show it. It can interpret it in Texture panel (inverted) but comes with weird holes. 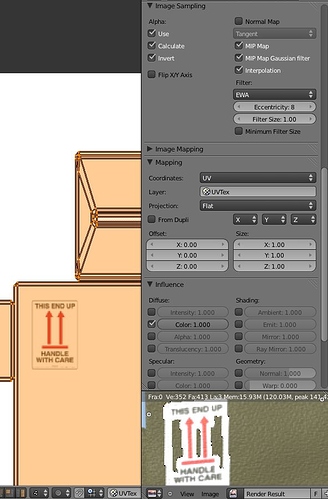 Why would this be?

Have you checked if you saved the image with a different layer mask that you expect ? A bit har to say without looking at the texture.

Thnks there is only a background layer and a cut out of the label on another. I only saved the one layer out from Gimp. I guess I should look at it in the compositor. The UV window would not show the alpha chanel.

I just don’t get it, I thought that if I exported a multilayer gimp picture with alpha (for it’s layers) to png then it would respect the alpha. But no I have to flatten the image first (keeping the alpha). Strangley Blender interpreted the alpha that didn’t seem to exist in the first version. Now I have re-exported the png from a flat version of the gimp picture, and the hole has disappeared but the alpha isn’t being interpreted right.

you can see alpha of an image in the UV/image editor. The 3 buttons next to the paint mode button are for the display of the image. Check the second button to see transparency

Yep did that as I was confused that it mostly worked right in texture but didn’t appear in uv window or compositor. Wish I could use the gimp image importer but I’m on windows.