Yup, been using the latest UV Packmaster in Blender 3.0.0 for a couple of weeks now, works pretty damned great.

One of the features of the upcoming packer major releases will be a complete UI rework. So who can give us better ideas for how we should redesign the UI than you: the users?

That’s the reason why I would like to ask you for feedback regarding the packer UI in Blender: what works well for you in the current UI? What would you change and how would you change it? The more details you give, the better.

Also, if you have an idea for a new packer functionality, mode of operation, it is a good moment to share it with us.

Users who send us the most valuable feedback will be kindly asked to participate in beta tests of the upcoming major release. Yes - the general scope of changes in the packer architecture is going to be so wide that it will require some beta testing. And I can’t wait for the moment when I can share more details about changes to come

Awesome! I sent you some notes/ideas. Thank you for such an amazing addon! I’m very exicted for the future

Awesome! I sent you some notes/ideas. Thank you for such an amazing addon! I’m very exicted for the future

Guys, when a dev is as hard-working and dedicated as glukoz, and especially when their product is this damn good, we as users/customers should really make an effort to reward that hard work and dedication. I personally am going to try to evangelize UVPackmaster with my limited free time, similar to my spreading of the good word for B-Renderon and E-Cycles. When I like something a lot, I definitely let others know about it, when I can. I encourage you guys to do the same for glukoz. He has certainly earned it at this point! And not just here on blenderartists or game dev related sites… Every single person who uses blender and exports glTF/glb for WebGL should absolutely have UVPM! Next time I am on threejs forums I will try to spread the gospel there… Come on guys, lets get glukoz some more sales (even if he isn’t hurting for it)!

Thank you for your extraordinary support for this project! Such posts motivate me to work even harder

Hi! Love this packer, just wanted to say I found an instance where the packer fails to do a decent packing, maybe there’s some option I don’t know, and of course there are workarounds. 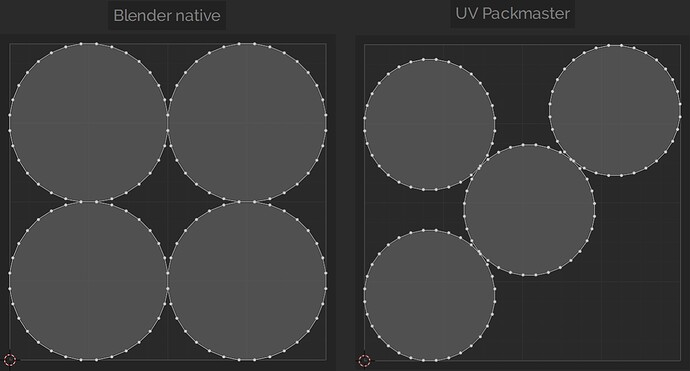 This is a simple example but the problem persist with lots of islands if the 4 circles are the biggest islands. I let it iterate and didn’t get better.

It’s not a serious problem but I wonder if it could be fixed.

It seems packing by bounding box is useful sometimes hahaha Thanks for the addon!

Thank you for your feedback!

Other 1% of cases are quite specific and easy distinguishable so one can just use the Blender native algorithm when he encounters them.

RELEASE 2.5.8 (UVPackmaster for Blender and UVPackmaster SDK - both components were updated with the same fixes and have the same version number now)

What the benefit of UV Packmaster compared to the free UV Packer?

Do you charge again for version 3? Or is UV Packmaster like most Blender addons over all major versions free?

Let me list some UVPackmaster features which are not available in UV-Packer:

Those were the main differences, I guess you could find a few more

If you prefer to check more visual representations of the features mentioned above, I recommend you to look at the slide show included on our site.

Now regarding UVPackmaster 3: I haven’t decided yet whether the UVP2 → UVP3 upgrade will be free or paid but please keep in mind a few things:

hello @glukoz , is it possible to distribute UVs into separate UDIM tiles based on objects or materials, but have them keep their original position from the first tile?

I tried using packing groups to tiles, with rotation disabled, fixed scale with the different strategies, but I could not get the desired result.

See what I mean here with 3 objects: Such option is not currently possible, because UV packing generally involves changing island positions and UVP2 is mainly a UV packing tool, but… it might change future releases - stay tuned

One feature that I just thought about, that would be awesome, is some way to orient islands according to the mesh…

Very often, when I do an unwrap via hard edges/etc, the islands are all rotated randomly. I can do some alignment things, with Textools/etc, but they are still random.

It would be awesome if there was a way to orient islands to more closely match the mesh if at all possible. So faces that are broken up by seams/hard edges, next to each other in the mesh, are not flipped/reversed in the UV. Without having to do so much manual rotations/fixups.

Edit: Basically if a tool / button can somehow take the first image and get more like the 2nd. 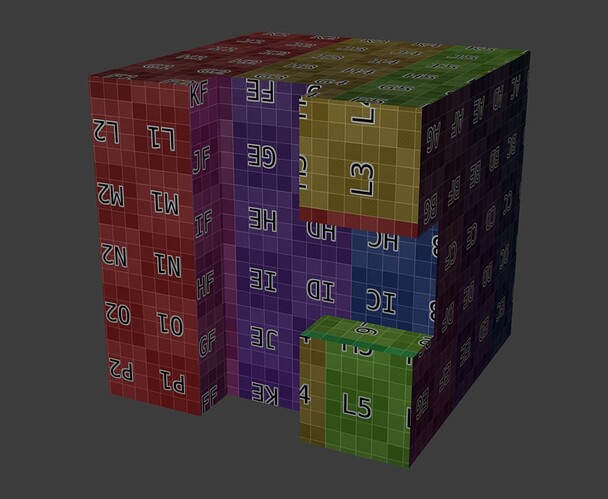 What about colouring/metal/materials. Let’s say there are 4 materials/colouring. We could group these islands into 4 groups that have the same colouring or material.

that could work better for some people. I had thought of this a long time ago.

Hi @glukoz!
I’ve been using PRO version of the addon for some time now, and overall its great! I have one thing to report tho.
With CPU packing I can see that the threads are occupied pretty evenly across, but the average utilisation of the CPU is around 40%. I don’t know if this is a hard limitation, or just something that can be optimised further.

Hi! There is no hard limitation for CPU usage. Please send me a screenshot of the UV map and the packer options you use in that scenario to [email protected].

Exactly what I was looking and hoping for! Happy to see this idea was posted recently.
I checked lot’s of uv scripts/addons and none of them seems to support a function that orients islands according to mesh geometry in object space automatically/per click.
Would be very useful both within the packing algorithm and as a separate button to orient selected islands.