First time doing this. What the heck am I doing wrong? 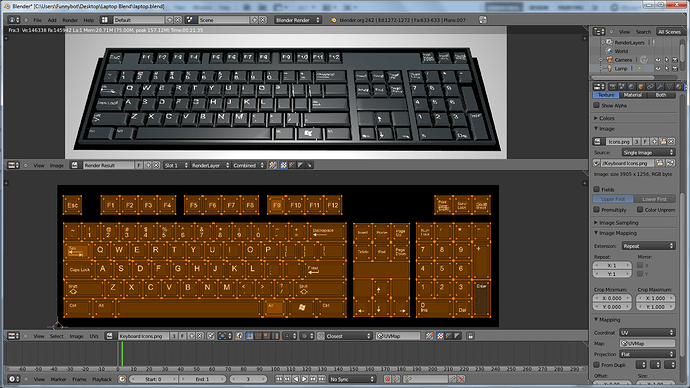 This may be a bit of a stretch, but your image texture dimensions may be screwing things. It’s always best to use powers-of-two dimensions when possible, or at the very least, always use even numbers of pixels. 3905x1256 is a bit unusual, and the odd width may be creating issues.

Your UV Mapping looks sound, so maybe you can just “pad” the image out to different values. It’ll mean repositioning and maybe scaling the UVs but it should still fit the keyboard with a little tweaking.

Also check for unusual numbers in the Offset and Size fields of the Mapping section, or similar values elsewhere that might shift the image from a default conformance to the UVs.

I found the problem… for my keys I had a bevel modifier, I turned it off and it rendered fine.

Since I got you here… is it possible to import an image with an alpha channel? I want to put a dell logo on the keyboard, but I wasn’t sure if I could just plop a logo on there… or if I had to do a UV Unwrap for the geometry in question… I notice I couldn’t import Alphas for images I use in the UV Editor.

Put the alpha logo on the original texture, which you are projecting on keyboard mesh.

Yeah, modifiers affect the original geometry, which is the basis for your UV unwrap, so that would create issues. Glad you found the problem.

If you want to place the logo on the keyboard “case” (which isn’t shown in the UV unwrap above), I’d definitely recommend unwrapping the geometry for that part. It’s possible to place a flat image with alpha without it but it’s a royal pain to do, whereas UV unwrapping will let you place it exactly in pretty short order.

If your image to be used has an alpha channel, Blender should recognize it when you bring in the Image Texture, but make sure the “Use” button is checked in the Image Sampling>Alpha part of the Texture context panels. There are even settings you can use to generate alpha from the RGB portion of the image. Exactly how to do it depends on the kind of image you’re working with – a number of different file types can have alpha data as well as RGB (i.e., RGBA), PNG & TGA being the more common. I prefer TGA for alpha-specific materials because its explicit alpha channel provides for greater control over transparency, but that’s just a personal pref.

ADD’L TIP: It’s usually a good idea to check the “Premultiply” option in the Image section as well, if your image texture has an explicit alpha channel. 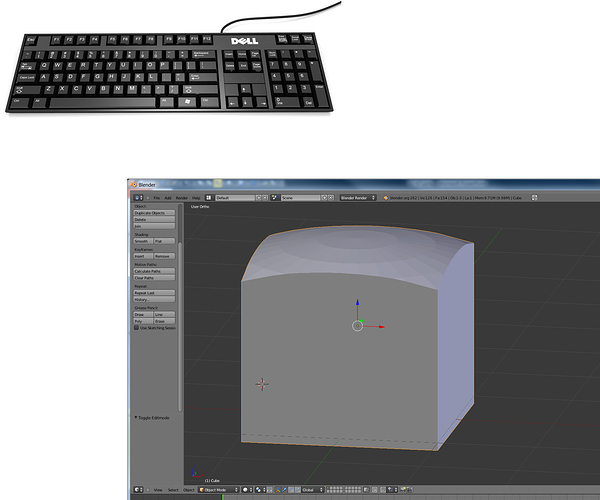 What if applied the bevel… so it’s no longer a modifier and part of the geometry (Apply button). And then did a UV Unwrap, wouldn’t that then create a no-issue texture. I was thinking that when I did a UV Unwrap it didn’t take into consideration the bevel because it wasn’t applied to the mesh yet (it was in the Modifier section, turned on, just not applied I mean) and when I applied the texture it was as if I didn’t have a modifier, and thus it worked when I removed it. Hope that made sense.

“Premultiply” option in the Image section as well: Not following. Sorry.

So here’s my in-progress keyboard. I tried to use Cycles, but it made everything solid black, with no light bounces, just pure black. I then realized others were having this problem. SO I stuck to the Blender Render, which I actually like.

Also… the Dell logo I have currently was a SVG file I brought in and converted to a Mesh. I then extruded it. I want to have a convex (I think that’s right) bump on it. So the bottom of DELL is flat (or slightly raised) and the center of DELL (bottom-to-top) is raised… and then the top is flat (or slightly raised). I couldn’t figure it out. I was going to just import a PNG with an alpha and then apply a Displace to it. Instead I was tinkering around today with the Boolean modifier… what if I put a squashed half sphere over the Dell logo and applied the modifier. It would give me the effect I’m seeking, but as seen here the top part of this cube is funky. So (not shown here) I tried the Boolean again with a Sub-Surfaced sphere… and it still shows slight creasing on the meshes where it comes to a point at the top (not that noticeable).

Is there any easy way to do this using Meshes. I’m not brave enough to jump into Curves.

Thanks again… so far you’ve pushed me enough to learn more about Blender in one week than I’ve learned in 3 years attempting to learn it.

Actually the shape I want the DELL Logo is more like this. I made this using a Boolean… it still has sharp edged angles… and a smooth makes it worse. I guess this is the closest I can get. Can I have Curves and Mesh at the same time or do I have to choose one or the other? 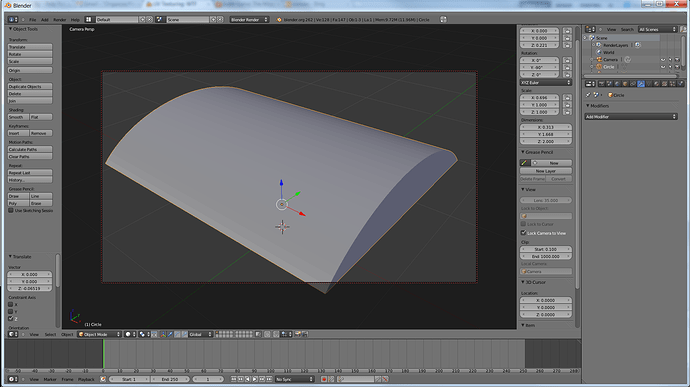 You can use the edge split modifier to make the faces smoother while still having sharp edges if that’s what you’re asking.

What if applied the bevel… so it’s no longer a modifier and part of the geometry (Apply button). And then did a UV Unwrap, wouldn’t that then create a no-issue texture. I was thinking that when I did a UV Unwrap it didn’t take into consideration the bevel because it wasn’t applied to the mesh yet (it was in the Modifier section, turned on, just not applied I mean) and when I applied the texture it was as if I didn’t have a modifier, and thus it worked when I removed it. Hope that made sense.

Perfect sense. Yes, the distortion was because the modifier was acting on the already-mapped geometry, so it distorted the mapping. If you apply the modifier and unwrap again, the image won’t distort. But other modifiers can have an effect also, such as Subsurf. Note that Subsurf has an option to apply it to the UVs as well as the mesh geometry.

In the Textures context (where you do the texture setup and importing), a sub-section is labeled Image Sampling, In that sub-section are some buttons under a label, “Alpha:” Make sure the button labeled “Use” is checked, so Blender will know to use the image’s alpha channel. The other buttons let you generate an alpha channel from the RGB values in the image, or to invert the alpha values to reverse the transparency effects.

“Premultiply” option in the Image section as well: Not following. Sorry.

Again in the Textures context, find the subsection “Image.” This is where you choose the image to be used as well. One of the buttons is labeled “Premultiply.” It’s a good idea to check this, as it often prevents edge halos from showing up where the image becomes fully transparent.

Modeling the top curve of the logo would indeed be a tricky process. I think my approach would be to model it all flat, then experiment with using Shrinkwrap to conform the top surface to a curved template mesh, sort of digitally vacu-forming it to the template’s curve. The Shrinkwrap modifier can be a bit finicky but can also give very good results for something like this.

Thanks chip. I’ll keep that in mind when I further attempt my Dell Logo.

I’m trying another model… an iPod. Using Bezier Curves I’ve created an outline of the phone (via Background Image). I then converted the shape to a mesh. I then Filled, and then Extruded. I want to make a cutout of the home (round button for thumb) button. So I attempted to take the aforementioned shape into Edit mode, and thought I’d draw a circle at the same level as the surface I want to cut out. It’s not working.

Can I add an existing shape as a cutout to another shape? The only way I know is with the Boolean modifier… but that seems cheap. Can’t I be more precise?

Thanks for the guidance! :RocknRoll:

I generally don’t use CSG techniques for modeling as it can add loops & vertices indiscriminately and rather messily as well. For a “cutout” in a planar surface I often add loops manually to form a square face at the cutout area, subdivide selectively, reshape the square into a round shape, then subdivide (selectively!) some more, transform and add more loops, using Edge Slide to sharpen up corners if the faces aren’t being actually removed. Something like this:

Subsurf takes care of smoothing the rounded corners and edges.

You are awesome. I only grasped what you said from attempting to learn Maya 8 years ago doing something similar. Does my attachment do your last post justice.

So, since I used curves to create the iPhone shape, I think I can not ditch that model and start with a mesh plane and a subsurf. When I filled in the Curved outline I did (using Curves) it look like a mess. Using a subsurf with mesh will give me cleaning geometry thus allowing me to use loop cuts and slides. How fun!

So would I have to APPLY the subsurf in the event I want to do a UV wrap? Like for the Iphone screen, which will have to be a photo cropped… should I just put that on a plane and have it stick on top of my geometry?

Is it possible to loop cut partially, as to not have it travel throughout the whole mesh? Or can I loop cut and then delete portions of it? I’ve tried that in particular and I get holes that when I fill look unclean (zig zags).

So as you’ll see here… if I make any more loop-cut to makes the circular button indentation it will ruin the shape of my iPhone. Any ideas? I’m stuck. 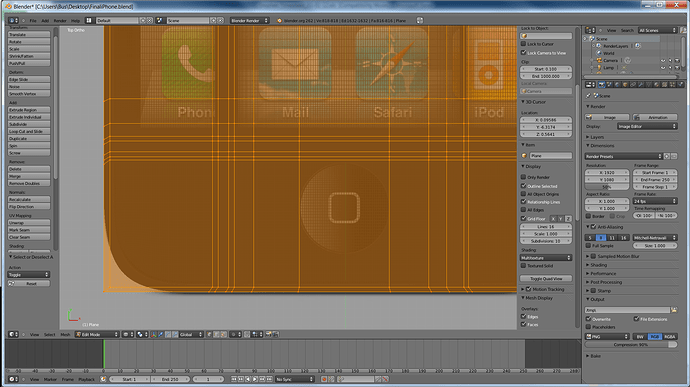 Is it possible to loop cut partially, as to not have it travel throughout the whole mesh?
Select the edges you want to cut, W / subdivide, Ctrl+E / Edge Slide

Or can I loop cut and then delete portions of it?
Select the edges you want to delete and X / Edge Loop

Note these will create additional triangles

In the screenshot you show, you can grab only the edges needed to describe your indentation and drag them into place with either an axis constraint or Edge Slide. The loops don’t have to remain perfectly parallel, so the vertices at the corners of your i-Pod can stay where they are, and only those internal verts needed for the new modeling need be moved. If you are careful doing this, you can minimize the number of cuts needed and also keep your surface flat except where it’s being remodeled.

Alternately you can add full loops that deform the corners, then re-shape them. To get the reshaping highly accurate you can use a mesh circle with the proper number of vertices and place it at the corner, then move your model vertices to match the “perfect” curve, snapping as needed.

When using Subsurf, particularly at high levels like 3 or 4, applying the modifier makes working in the UI much slower in many cases, so it’s better to leave it un-applied (imo). There is a button in the modifier to have the Subsurf applied to your UVs as well, which should help with texturing.