let me begin im pretty new with blender. At least with really using it hardcore. I have seen tons of tutorials and tried some stuff once in a while. I do know pretty much all of the basics but i never really model that much, im a graphic design and dont really use 3d in my work. Only once in a while to render some work ive done in photorealism.

Often i run into problems when using unwrapping. For instance i downloaded this model of a tree yesterday, no texture came a long so i tried mapping it my self. The basic mapping with which the model came along did seem right to me. Perhaps something went wrong with the import cause i see this often with imported obj files. When i select the mesh and check the UV editor, the mapping seems some kind of basic squared mapping. Some times it’s okay using this, for vehicles etc, where the material doesnt really need UVmapping applied. But some as in this tree example i want to adjust it.

In the attached screen shot you see different setups i tried. The first one is how it looked when i imported the obj, some parts look good and some are really stretched. I tried to adjust everything also with connected geometry to get a better result, eventually i was getting better but it takes quite awhile to all the this stuff manually.

Than i tried unwrapping the model with a seam applied, but i always get these weird looking shapes. Tried all the tricks i know which could make it a little bit better. i could try to make the seam go away by texture paint over it, but i want to make use of the textures which are ready for use.

I also tried cylindrical mapping, i never get this thing to work properly. When i try it on a new added cylindre it works but in the example of this tree stem it looks as if the seam isnt cut. It looks more like it unwraps from view.

Could some one point me in the correct direction how to do this. I’ve searched tons of tutorials but most of them cover the very basics and i’ve passed this section. 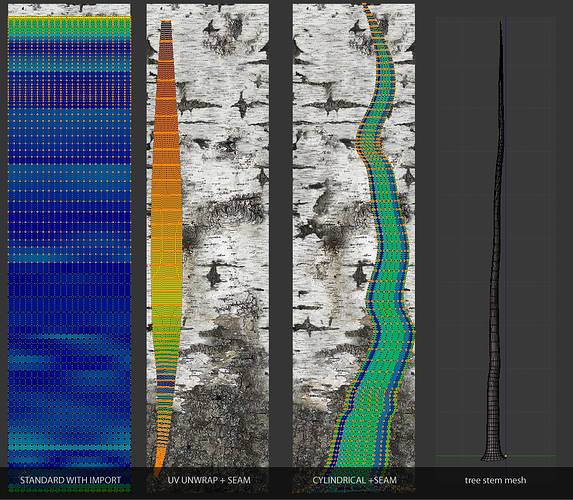 Try removing double vertices. Then perhaps putting a seam going along the stem and unwrapping. After you unwrap, you could try changing the unwrap method (F6).

thanks! sorry think i should mentioned that i did all of this. i also applied scale, rotation, location, removed all doubles, recalculated everything. Thing is i get this a lot when i try to unwrap stuff, always think sjeez this is gonna take hours to fix.

Let me attach the stem so you can take a look.

Yeah it curves quite a bit. If you want UVs straight, there’s always the follow active quads option.
The way that works is that you first unwrap it the normal way (seams, U -> unwrap), then in the UV/Image editor modify one or more UV faces, select that UV face and U -> follow active quads. If the active UV face is rectangular, all of the others will be too.

Wow thats a really great tip! already looking great. I was also starting to look into UVlayout, it’s quite expensive but it really works well. Only problem is that the wrapping is always in 2 islands or more.

Il post the result today, later when i got the time

Thanks for your help! i never really read anywhere where it worked properly and find it was a bit useless. But know i see the power of it.

PS one thing i noticed in the unwrap is that some of the edge loops are broken now, is this normal with follow active quads?

Also in the UV editor the map doesnt look stretched but in the viewport it actually is?

Very nice trick this, know i need to learn me some texture painting. Than i can get rid of the noticeable seems.

Also found that its best to try some different faces to test it, some give much better result than others

if your UVs look stretched, use contrained scaling in the UV window to squash them in either direction.

Modron you mean by scaling them in the y or x axis and using connected geometry, right?

yes, just use S for scale and press the middle mouse button and push or pull in the direction you want to scale in. you might be able to see the results more clearly if you use a UV test grid while scaling instead of the image texture.

Here is a test render i did with thearender, did turntable as well 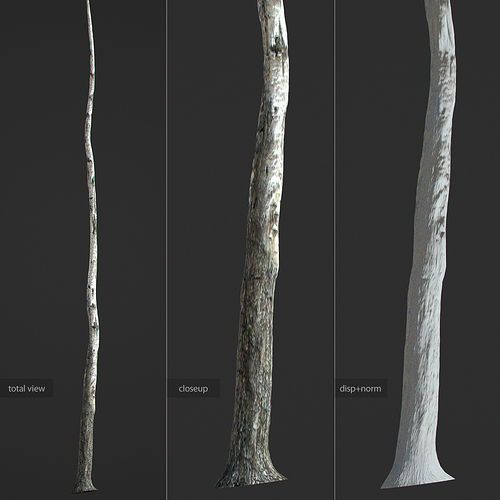