I got this book a while ago called “Introducing Character Animation with Blender” to help noobies like me learn this awesome 3d program. The problems I have with this book are minor, but frustrating sometimes.

The version of Blender the author uses is 2.42. The one I have is 2.49. So far I haven’t run into much when it comes to version differences. The one question I have is on UV Unwrapping in the older vs. newer versions.

The character we’re working on is “Captain Blender”. I’m supposed to select certain parts of his head and click on “Mark Seams”. So I did that. The next thing was to select the whole head and go into “UV Face Select Mode” which, from what I’ve heard, has been combined into “Edit Mode” since version 2.46. He didn’t say to do anything in that mode other than telling me what I can do in it. After, he says to hit “E” and select “Unwrap”. But because UV Face Select was combined with Edit Mode, I found out that to hit “U” instead. So I selected “Unwrap” and my unwrapped head came out much different than the example in the book.

Here is his example from the book (Chin is highlighted in Blue, Eyes are in Red, and Mouth is in Orange): 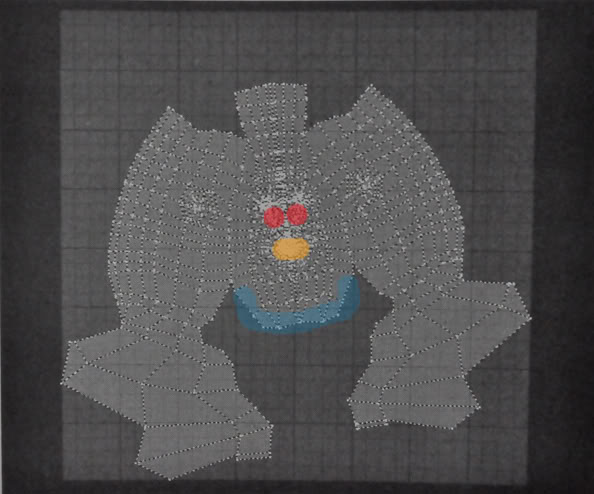 And here is the outcome of the head in my model (Chin highlighted in Blue, Eyes in Red, and Mouth in Orange):

Side note, the CD included with the book has his EXACT model that I can use. So for UV Unwrapping I decided to use his so I can figure it out. I did his EXACT steps using his EXACT model.

So does anybody know what the problem is? All seams were marked to his specs, unwrapped, everything. The only thing I can think of is a version problem. Thanks!

First of all, I must say that I’m impressed that you found out how to do everything in 2.49. That’s a good mentality.

As for the unwrap - that’s always a bit hard to tell, since small things can have crazy effects. The unwrapping method can, at times, do some wonky things, so it’s often a good idea to go to Editing (F9) -> UV Calculation (next to Multires) and change Angle Based to Conformal. To date, though, that hasn’t helped anyone whom I suggested it to.

By the looks of it, I’d say it looks like you forgot to place a seam somewhere - even skipping a single edge will ruin it all. Worth looking over that again, anyway.

If nothing else works, attaching a .blend to your post is always the best way to help people help you

I read through it a couple times, re-did it over and over again, and eventually I figured it out. The Author gives you a picture of selected vertices he wants you to turn into seams as a START. I was supposed to mark other vertices as seams until I eventually match the unwrapped picture above. For instance, the 2nd picture (the one that I UV Unwrapped) is what it would look like if I Unwrapped it with the seams he selected as a start. I was supposed to mark vertices that were hidden, behind other ones, and in other key areas until the unwrapped picture looks like his finished one.

So it wasn’t entirely mine or his fault. Although he wasn’t specific about it and just casually mentions it. He should have at least gave me a picture of the ones he wanted marked. Mainly cause I’m such a noob, but it does help me learn.

Thanks for the advice, Zwebbie

As for the unwrap - that’s always a bit hard to tell, since small things can have crazy effects. The unwrapping method can, at times, do some wonky things, so it’s often a good idea to go to Editing (F9) -> UV Calculation (next to Multires) and change Angle Based to Conformal. To date, though, that hasn’t helped anyone whom I suggested it to.

Yeah it does help them. Most of the people who are expecting a different unwrap tend to be unwrapping boxes and cylinders.Think of conformal for mechanical stuff and angle based for organic/characters.