NOTE: Check page 5 near the bottom for .blend file and info.

I’ve been working on a female character for a while under the WIP thread:
http://blenderartists.org/forum/showthread.php?t=90035

She’s changed a lot and is starting to get near the finishing stages of modelling. Maps for the texturing is next (uv layout needs a bit of tweaking), but you should get a pretty good idea of what I’m going for by looking at the renders so far and the simple concept sketch. The rig is pretty much complete as well, waiting to be attached to the finished mesh. I haven’t modelled any of the cloth yet, I might wait on that and add it later as it will be a separate mesh and not that dependant on the rigging. Hair will get done later too.

The skin is something thats been bugging me for ages, but thats nothing new… The skin in the non-clothed-but-not-really-nudity turnaround vid is just nodes, no real sss, basically ramp shaders and can be found in http://blenderartists.org/forum/showthread.php?p=850256 towards the end. Unfortunately, I haven’t worked the colour map in yet in a way that I’m completely satisfied with, so I thought I’d finish the modelling of the suit and some other stuff first and come back to it. The metal guards are probably too shiny, but I’ll just dull the reflection a bit.

P.S. As stated in the WIP thread, I intend to release the finished character as an animation resource in the same idea as Mancandy and Ludwig, rigged textured and everything. Hopefully I’ll finish in time to submit to the BlenderArt Magazine, being on organics and humans this time. 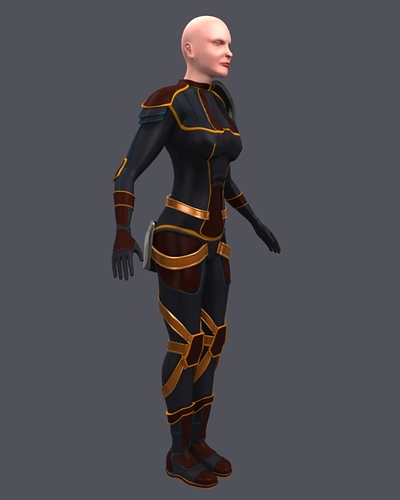 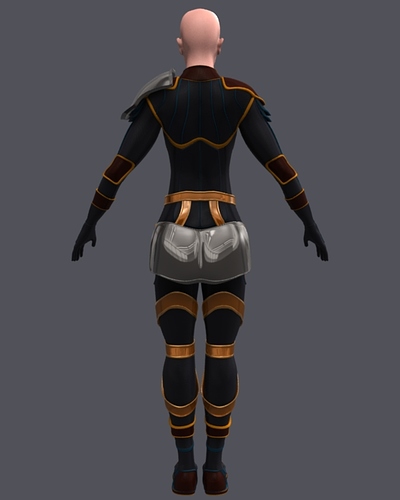 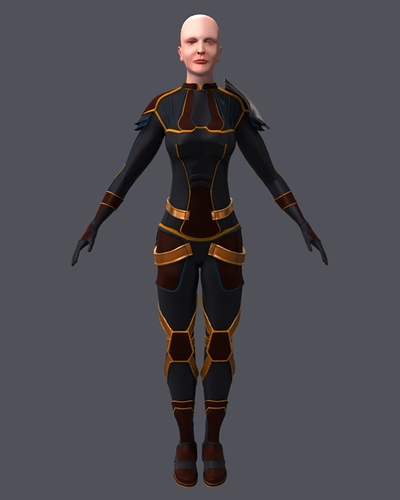 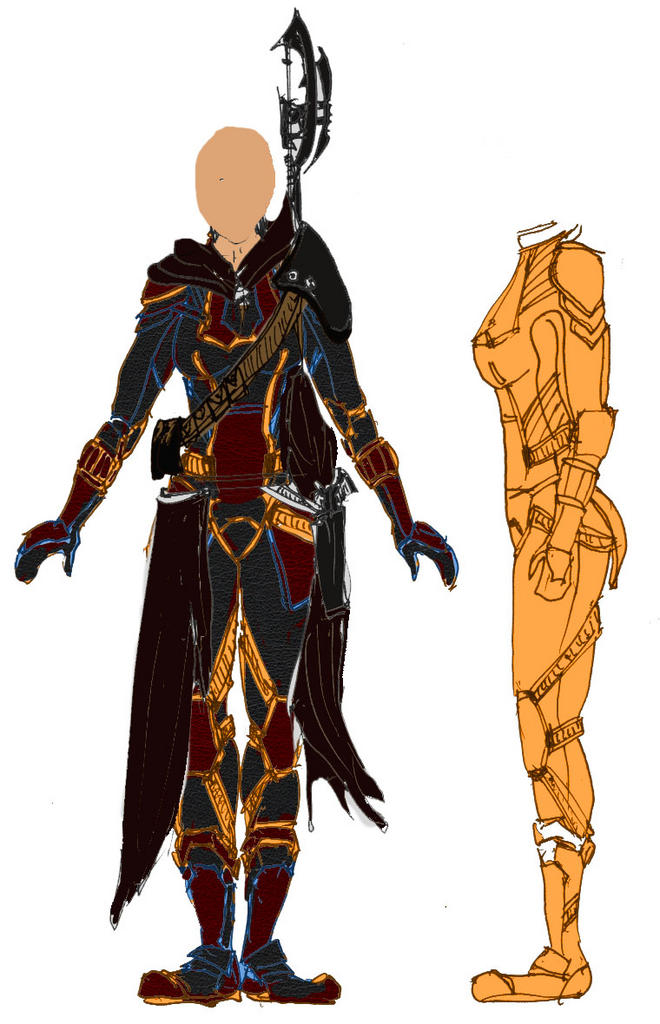 Tweaked the suit colours a bit, skin a bit better, although possibly not that noticeable from previous small jpegs anyway. 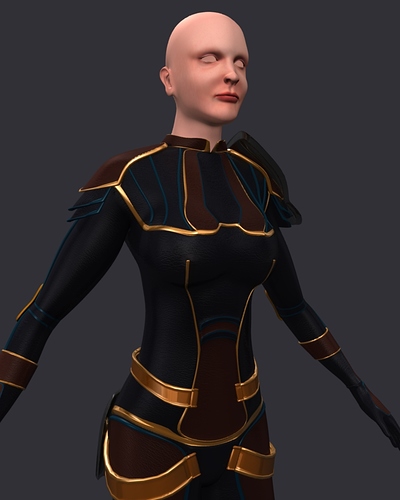 Oh, I was planning on saying something earlier, must never have gotten around to it. Anyway, that armour and everything there is starting to look pretty good. The skin shader doesn’t look bad either, the colour map has a few glitches, but most of it’s pretty much fine.

Cheers, the colour map on the head is sort of 50% done, mainly to block in the colours on the face. Ears need work, possibly the jaws/cheeks as well. I’ll hopefully get a bump map done soon, just a subtle one for pores and so on. About to texture paint the suit, very excited…

Just a small update, much larger one in the next couple of days I hope.

I’ve begun the often frustrating task of rigging, but I’m doing my homework this time and looking up all of the tricks and scripts that make it go a little faster/smoother. I’ve done 4 shapes for the shoulders (then mirrored them right to left). They deform fine in my opinion, but are quite ‘static’. However, there is a shoulder bone, and I’ll probably set up an action constraint or something so that bone moves when appropriate. Also, the rest of the body will obviously be moving when animated.

The other vid is a sss test with the new ‘scatter’ comp node. The effect is toned down so she isn’t waxy, but you hopefully get the idea. http://www.blendernation.com/2007/04/21/sss-node-under-development/
Check it out for skin and other uses if you haven’t already! I’ve also got a setup with mask id and so on so the suit renders without it and the face only has sss, no good renders yet, will work on texturing first. I found that if you put the ‘error’ setting on .5 instead of .1 the result is much much faster with a pretty good quality. (Thats what the vid is set to.) Not sure about closeups though.

Attached pic is a mini progress on the textures, I’m quite happy with the metal guard material, need to ‘unsymmetrical’ the bottom plate yet. Next update will have much more on the texturing side. She’s still rendering out reasonably quickly with 2 sets of 4k textures (suit and head) for colour, normals etc. which is good. 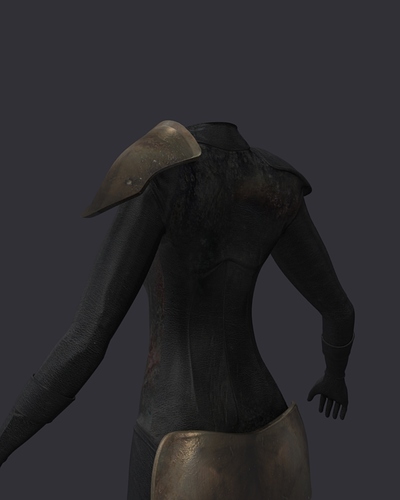 I’m watching this, by the way. Just thought I’d mention.

Cheers BlackBoe, I’ve been meaning to update more often, but I’ve been busy getting my head around ZBrush, which I’m using for the texturing. Speaking of which, here is the big texturing update I promised in the last post. The main suit mesh textures are finished!

And a 2048 set for the gloves. Set means Colour and bump that got worked into a Tangent Space Normal map for each section. I’ll probably have some issues uploading all of that as .tga files, so I’ll make (quality) jpeg versions for the final upload as well as reduced 2048 and 1024 versions.

I’ve tried rendering out at Full High Def (1080p) and the textures hold up pretty well. I may make colour adjustments later on, particularly more discolouration/damage/noise, but very happy with them for now.

(Note: both should play fine, if not you may have to fix the file extension to either .mov or .mp4 as the encoder I use just does that to files and I forgot to rename before uploading.)

Whilst I’ll be going on to texture painting the head and doing all of the shape keys next, I am definately looking for C&C on the texturing of the suit. This is probably my favourite texturing job I’ve done so far, but I want to know if there is room for improvement because there usually is in any given piece.
I was aiming for ‘leather’, but she’s sort of a sci-fi character or at least heading in that direction, so realism to earth ‘leather’ isn’t necessary. My main thoughts to look at are:

Last thing in a long post. I’ve discovered that the higher the detail in the texture, the less samples of AO you seem to need to avoid noise. Only one of these renders has any AO in it (the last image) and thats an AO setting of 1 sample! The other thing is with Zbrush - applying the subsurf modifier first before exporting with subsurf uv on before you export the obj for painting allows for much better translation of the painted texture when you import everything back to Blender.

Next update hopefully soon as I am still aiming to meet the BlenderArt Magazine deadline with this character rigged and ready to go. Felling pretty confident I’ll get there.

Cheers for putting up with a long spiel,
Ben. 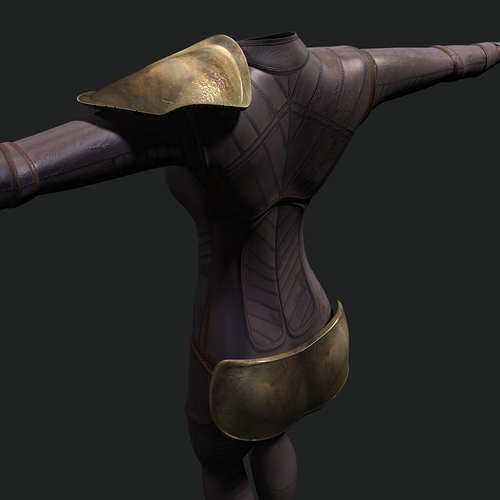 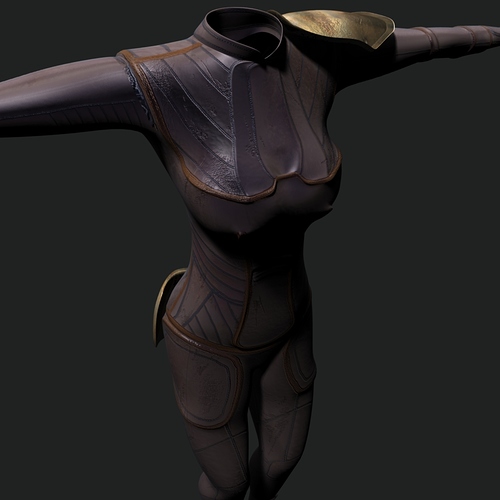 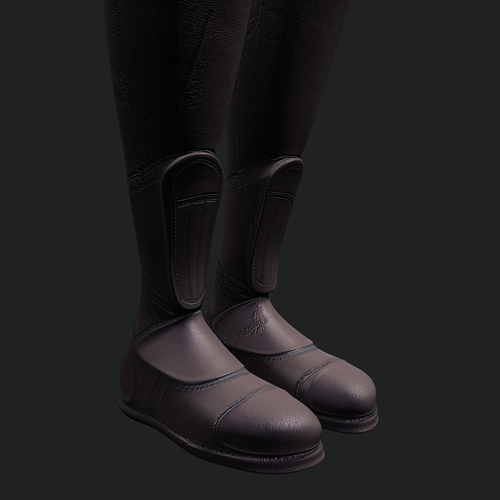 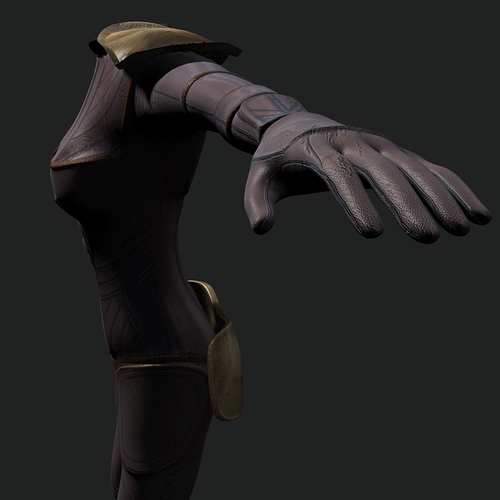 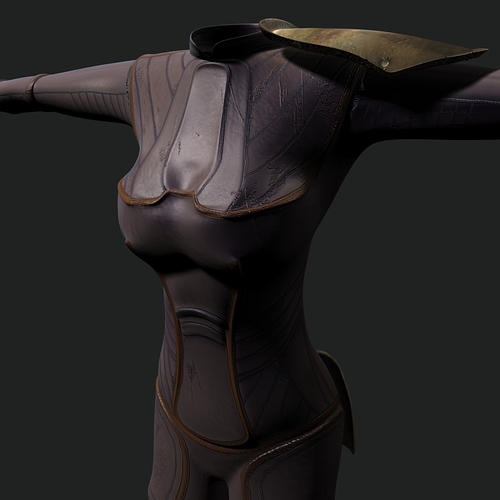 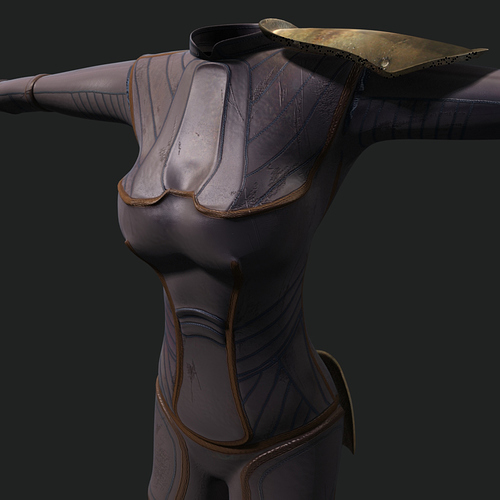 wow you really did somthing about those textures ! really nice. On thing: I likle when the suits are more black… So how about making them darker? I think that would improve the model alot.

…Wow. Now THAT is not bad. Like, at all. That’s friggin’ awesome, even. Nice, nice job.

The animations look pretty bad, though. Almost all the detail is lost. What are your AA settings? IF they’re set to ‘guass’ or ‘box’ then you’re in trouble. See if ‘cat-rom’ or ‘mitch’ works better. Also, see if you can turn down the filtering options in the image importer section. 1 is usually too fuzzy. Blender has pretty crappy default anisotropic filtering.

Black is a bad colour for a suit. Besides being kind of over-used and cliche, black is also very easy to see, in the dark and in the light. A much better colour is a dark, tinted grey, much like the dusty purple he’s using, or some kind of mottled grey-green or blue.

The wear and tear as it is looks fine, though depending on what state of use it’s in, you could add a couple more distinguished marks, maybe some knife or carbon scoring from a couple close shots. Maybe a pot-shot ding on her pauldron. That’d only be if she’d been in some close scrapes, though, and they’re not really necessary.

Anyway, as it is, keep it up. I’m waiting to see this finished, it’s suffered a huge jump in ‘wow’, just from that.

Hey! It’s Zam Wessel! Or at least that’s what she looks like…

Hey all, thanks for the encouragement, took quite a while to paint those. I was originally intending to make the suit darker, but most of the detail (particularly the normal maps) just wasn’t going to show up unless there was heap of light pouring all over it which would effectively just make it grey again anyway.

BlackBoe - cheers for the AA hints, to be honest I usually render out with AA set to 5 samples on the default setting of Gauss. (Crank the samples up higher for a final image though obviously.) The other thing about the detail in the videos (aside from being compressed pretty heavily) is that the leather ‘bump’ is quite fine/small. That’s why it only really shows on the glove closeup. I was considering making it bigger, but probably won’t. Next video I render I’ll turn up the settings a bit and let it render for however long it needs. Hopefully that will include a fully textured head with sss. Then on to hair and finishing shape keys…

Gauss is, like, the worst possible filter. It blurs everything and muzzes it all up.

Remodelled the head basically from scratch following the Adrianna head video tut by MrBomb, then tweaking to look like someone else. I advise it heavily…

Only one render because I’m off to watch Australia win the Cricket World Cup (only on tv though)! 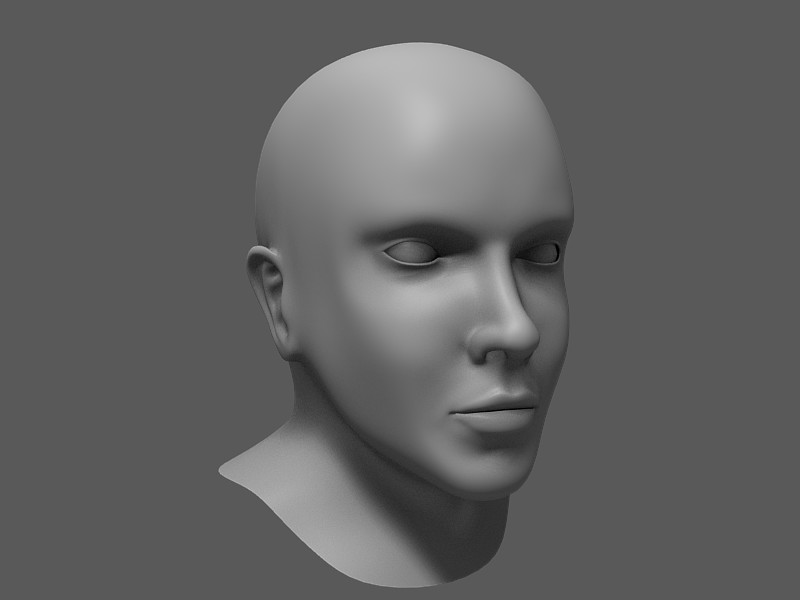 This looks great I give it a 9 stars.Its some of the best work I’ve seen in a wile.

I dunno, something about the face seems a bit manly. I think the brow and the nose might be a bit too heavy.

Also, you should re-download the SSS blender built. It’s out of composite and into Blender Internal now, as a shading system. :]

The head is better now! Much better

Thanks Lasphere, was on the verge of using the old head to paint the texture on, but decided to dig my heels in and try harder

BlackBoe - yeah, I agree. Probably the nose as the nostrils do appear pretty large and defined looking at her after a few hours away from the screen, the brow might be because of the light position or something. I’ll have a fresh look tomorrow. Part the problem might be that I finished the Adrianna tut using those reference pics exactly and then just ‘made changes’ by looking at another female face rather than importing fresh ref images and changing the mesh that way.

Cheers for the heads up on the new sss build too.

A few quick renders before texturing. 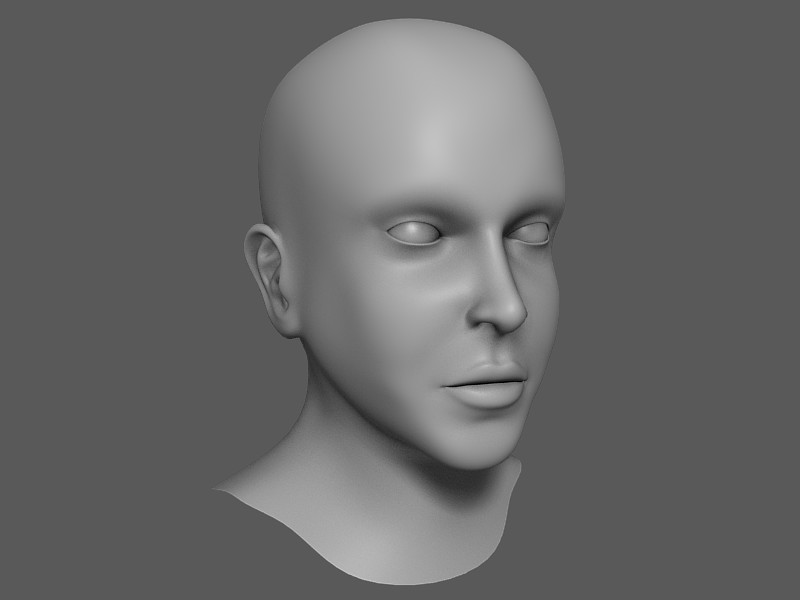 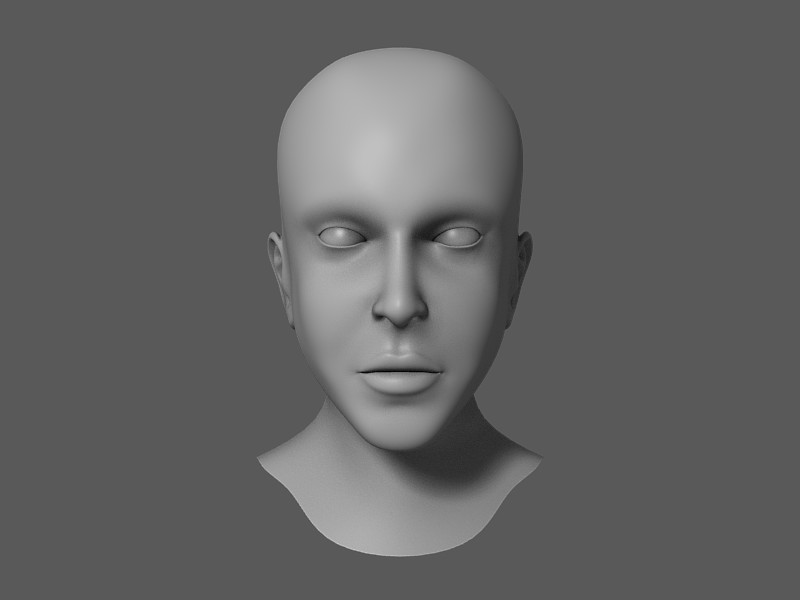 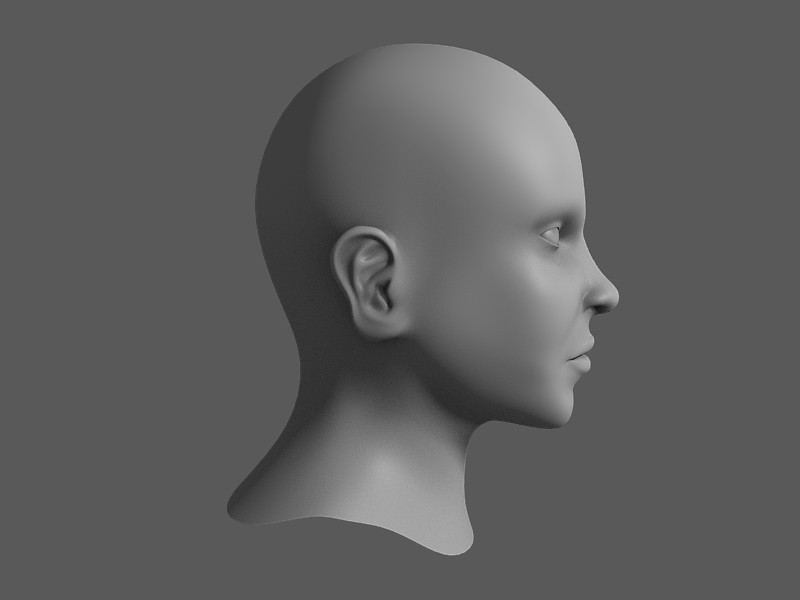 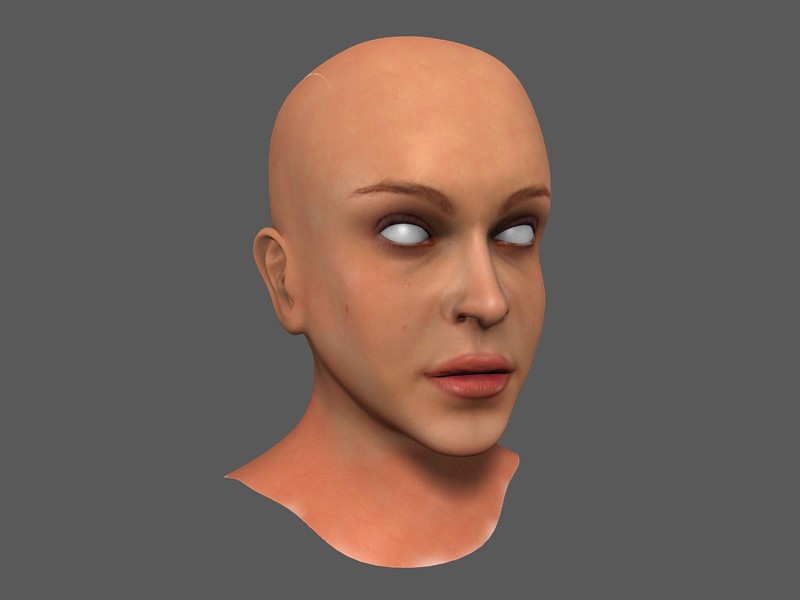 Another progress render, this time with sss. Particularly happy with the main face, the lips might need a bit of a cleanup in the colour map. Haven’t done a spec map yet at all, and the bump map is a quick edit of one of the versions of the colour map (which is why the eyebrow dents on the brow). Ears need more attention as does the back of the cheeks. Main part of the scalp will have hair all over it anyway. Hopefully do that tomorrow all going well.

As far as an ‘animation resource’, it took 2min 39sec to render that image. Granted I was using high AO and an area light, but I’ll try and find a better/faster lighting solution, probably combined with radiosity (vertex colours). That being said, I’m aiming to make the character the absolute best quality I can, and then make another version or two that have scaled down textures etc to render animation tests with. 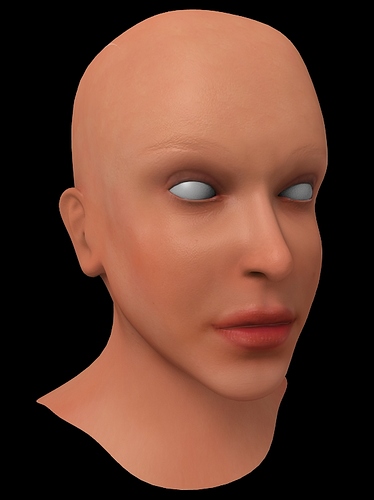