I’m programming an addon for Blender 3.2 in python.
With my addon I can load a file which creates an object. This object has a variable amount of materials which I only know at runtime.

I now want to include the feature to change the material color in my addon. I would like to implement something like this (this picture is edited, that’s not my actual state): 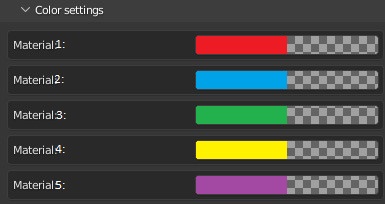 Is it even possible to define a variable amount of properties?

I’d be very thankful if anyone has an idea and could help me out with my problem!

You’re probably looking for a CollectionProperty. They’re basically Blender lists that you can use to have multiple instances of the same property. There’s some more info here: https://docs.blender.org/api/current/bpy.props.html#collection-example And here:

I agree you should explore bpy.props.CollectionProperty.

Re the update part, you can define variable update functions at runtime although it’s a bit complicated (example), but you can also add extra parameters to let the update method know which property called it and use only one update function, eg

Perhaps I’m misunderstanding but it sounds as though

With my addon I can load a file which creates an object. This object has a variable amount of materials which I only know at runtime.

the object already has materials applied and you just don’t know how many prior to loading a specific object.

You shouldn’t need additional properties for this. Granted the below is specifically looking for a principled bsdf shader and adjusting the default base color; but the concept of accessing the active objects material properties remains the same.

I got it to work by doing that!
I didn’t know you could also insert existing panels like the base color panel of a bsdf shader directly into an addon. But that’s a lot smarter! So thank you a lot for your answer!

Yup most properties can be displayed if you have a handle on the holder and its attribute name with a simple layout.prop(obj, "prop_name") no need to reinvent the wheel

You also have a bunch of templates to display more complicated properties like color ramp nodes. I suggest you read this page for more info https://docs.blender.org/api/current/bpy.types.UILayout.html