This not only relates to Pyroevil’s molecular, but also Blender physics in general.

I have used Pyroevil’s molecular add-on quite extensively to model moving air molecules - for a project I have to deliver to a client. (I am there only using the add-on’s collision part and not the linking part)

However, there is one thing that I am not able to get to work - and I am not sure whether Blender or the molecular add-on supports it.

The physics all work quite well… until I try to vary the particle size over time by keying the particle “Size” value.

Lets’s say I have 200 circular particles lying about 3 layers deep in a box/cube. When I decrease the size to about 50%, the particles don’t accurately become smaller and collapse closer to each other - they only collapse a little bit, but many end up “floating” on top of each other, i.e. with a distance between the particles (this is regardless of displaying them as an object: I am referring to merely displaying their size). Decreased size (“floating”). NOTE: I am displaying the objects here for visibility, but they are the same size as the particles: 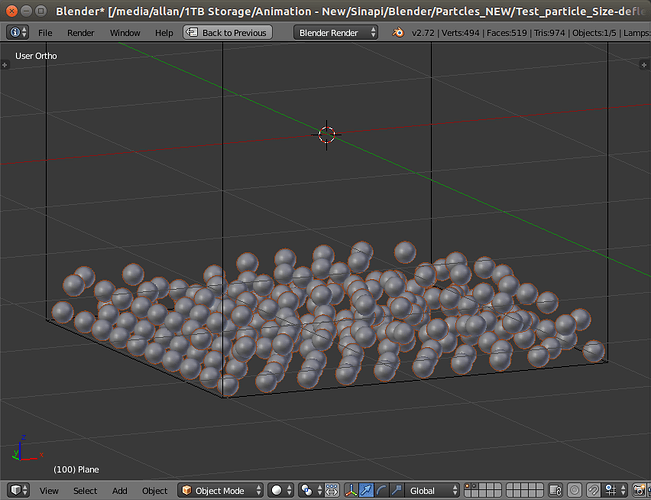 Also, if I key them to become larger, they don’t deflect, but partially start “merging” with each other - instead of pushing each other up in the box (I even animated the box to “rattle” - in case the particles needed some movement to help them, but that did not work either).

Increased size (“merging”). NOTE: I am again displaying the objects here for visibility, but they are the same size as the particles: Am I doing something wrong? Or does Blender or the molecular add-on not accurately support the deflection of particles when their size change over time?