Overall, I’m not very happy with the result, and might revisit it in the future. If you have any suggestions on how to make it better, please give me feedback.

I made something similar a while back when I was mucking about with an idea for a poster (never completed). Mostly figuring out what the simple deform modifier could do. I ended up with some aggressive planters… 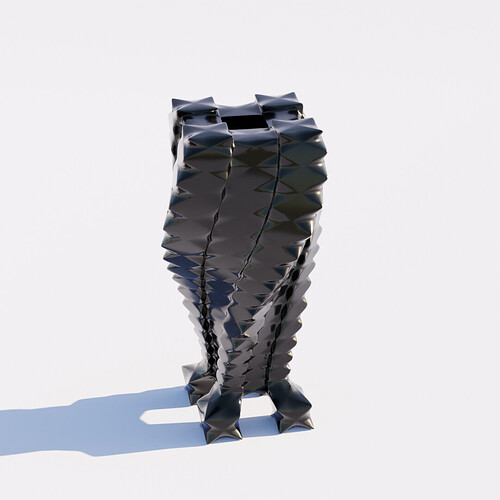 It looks very sharp for a real object - particularly the base. Have you tried seeing what it would look like with a bevel modifier (or just some bevels)?

I also think the style is a bit inconsistent. It’s sort of photorealism, sort of stylised, but the floor and pot textures are very flat, and the plants are low poly. You could lean fully into one of the other - either go full realism or more stylised like this.

The style was intended to be a low poly, but the lighting was a bit too smooth. The sharpness was intended, but I guess was not very consistent with the vase.

Overall, the root was the fact that I was a bit rushed this time. I will revisit it after this Nodevember is over.

At least it’s getting me into a loop of creating, feedback, and creating again. I had felt kind of stuck as an artist before.