It’s amazing what you can do with an open source 3D animation and modeling software.

The greatness is in the detail!

Great work!
The details are very goods and The textures too.
i like all, is a great scene.
Regards.

Good work and love the water but the sky looks like is on a plane or something (it just looks like it dosen’t integrate well into the scene) … and the lighting is bit little flat (or it could just be me).

Thank you all for the great feedback!

@jjjuho I will try some different lighting setups later.

@ForgottenWorld It was very hard to find a sky for me. Hopefully I find a better one, if I do other daytime renders.

Awesome!! well done
the 12 points to you…

awesome simply awesome. i like colur and lighting. water also looks great. have u considered creating evening version of this

That’s amazing! Brings back memories of playing Tomb Raider 2… Was this done with cycles? How long did it take to render if you don’t mind me asking?

The only thing different to the real venice is the smell.

If you have time, tell us a bit about it. How long modelling? How long to render? What were the biggest challenges?

I love this, it’s amazing. I hope to be able to do something like this one day.

The image is just great. Great modeling, great rendering. Maybe you’ve could play around a bit more with the levels. Heres my poor attempt to get more contrast an colorvariation to the image (Maybe a bit to overblown, but you should get the point): 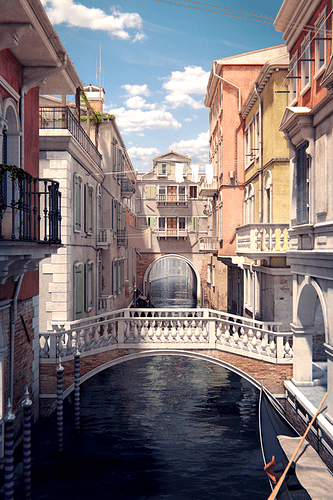 Your modelling and composition are great and realistic. Klamauk sees what I see. Based on midday sun, could the saturation be reduced and light on the architecture be more realistic if it had darker shadows and more washed out highlights?

Amazing, have anyone who make such beautifull scenes considered starting some kind of proyect to help rescue, in a virtual format hystorical buildings in danger?..

Reminds me of Assassins Creed 2