Animated short “Venus of Jale” was inspired by sculptures by Ljubodrag Janković Jale, recognized Serbian fine artists, former professor of the Faculty of Applied Arts in Belgrade. Since the 50’s he is engaged in work on different art forms, including drawing, painting, engraving and sculpting. His sculptures display figures of women. These figures have miraculous appeal, dignity and beauty, in a form which isn’t realistic, but simple and reduced into a composition of harmonic shapes in space. The style and simplicity of forms creates a monumental impression, which is unexpected for such small sculptures. These sculptures have richness of various influences, which seem to wrap all human experience in sculptural representation of the female body, from Paleolithic art, Archaic art, Renaissance, Picasso, More, Slavic native art, all collected into authentic sculptural handwriting. For the purpose of the project “Venus of Jale”, the author’s sculptures are transferred into the media of 3D animation, with aim to copperhand this modeling method of animation and to explore the relation between sculpture and 3D graphics, their similarities, differences and influences.

This project also explores stereoscopy. Stereoscopy is a method of preserving the 3rd dimension of form, which removes the border between screen and reality, extending the impression of the film on the audience.

Music: In the Water, by Isidora Zebeljan

This project is realised entirely with free and open source software:

Theoretical part of the project (on Serbian Language, sorry):
http://kekeljevic.com/share/venus-of-jale/B2_11-Igor_Kekeljevic-Jaletova_Venera.pdf

5 stars from me, my friend (vrlo dobro!

)! Very artistic and mesmerizing. I love how fluid the animation is, it just doesn’t feel like digital 3D.
Thanks for the PDF, I’d be interested in how this was made!

Beautiful! I love it~!

There is a lot of room for improvement, but this projects drain me out - lets call it finished

. I’m so glad You like it and I’m willing to answer to any questions if there is any.

Interesting… no questions… I’m willing to speak about every aspect of the production, but no one is curious how did I do it?

Excellent! The animation looks fantastic. Makes me proud to be from Serbia. Well done, again.

Someones location doesn’t present anything much important for me, but thanks. I feel little bit like Novak Đoković now

I am quite curious actually.
As I said the animation/rigging/morphing is quite interesting and unusual.
If you could share how you made the disappearing limbs effect that would be nice.

When the first female figure places hands on her hips the shapes seem to merge. How was that done?
Also when she walks, her “dress” seems to be deformed by volumes underneath, the effect is very convincing. Did you use some special kind of rigging?
There is an interesting jiggle effect. What about that?

I used Boolean Modifier for it. This modifier is amazing. It works great during animation, it’s even transfer UV Map and material to newly created object, so it’s easy to control how texture will look. Only downfall of Boolean Modifier is missing filtering of the influence by vertex group, as some other modifiers has. If You don’t separate arms into separated object from the body, cut would be done on the torzo as well.

Boolean mesh is a cylinder animated with shape key to shrinks down and then fitted into shape of the arm with Mesh Deform Modifier.

I used Mesh Deform Modifier for skinning, because it’s the easiest way to ensure all elements (body, limbs, collision objects, low poly version of the character, etc.) move in the same manner.

Fat masses jiggling are just a single bone rotation. Nothing special, just a good bone position and good weight paint. Rotation is done by a hand, just some curve oscillation fading out. I’m not sure how this method would work on realistic characters but on this kind of characters it did a trick.

“When the first female figure places hands on her hips the shapes seem to merge. How was that done?
Also when she walks, her “dress” seems to be deformed by volumes underneath, the effect is very convincing. Did you use some special kind of rigging?”

I didn’t do any merging. It just fitted nice.
I didn’t use any volumes underneath. Blender does really nice job with skinning by default, especially with Mesh Deform Modifier. Hurray for developers

This was exceptionally well done, very creative and a beautiful artistic composition! 5 stars!

This was exceptionally well done, very creative and a beautiful artistic composition! 5 stars!

Thank You very much, I appreciate it.

Some tips about issues I had and how to avoid them:

Igore, ovo je predivno! I have always been intrigued to see how some abstract pieces of art would move. This is the part of the answer. Materials, and models look perfecta and have very sensual and graceful animation. I love it!

Thank You, Riste. I wanted to make visible my ideas about 3D graphic. Forcing yourself to imitate nature or Pixar will always be just an echo of creative possibilities. 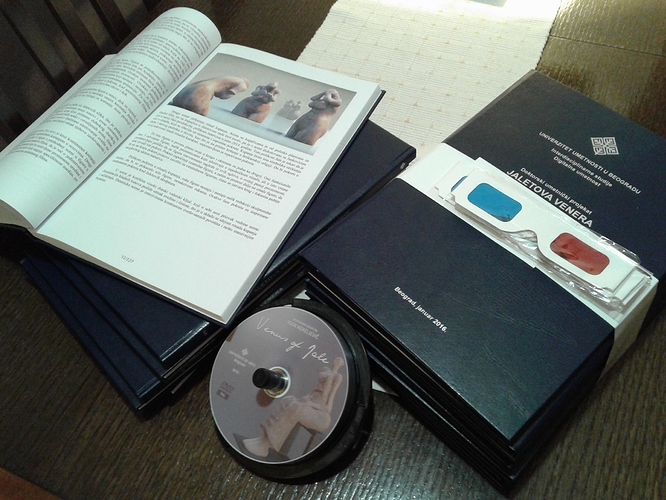 Just to share some news… I finally finished my PhD studies in Digital Arts, at Friday the 13th ;). Animated short Venus of Jale was accepted very well and audience were impressed with the project, stereoscopy, Blender and Cycles. Cheers…

Just to share some nice news about this project. Animated short will be shown in couple of international festivals this year and won a Special jury mention on FESA (Festival of European Student Animation). Cheers 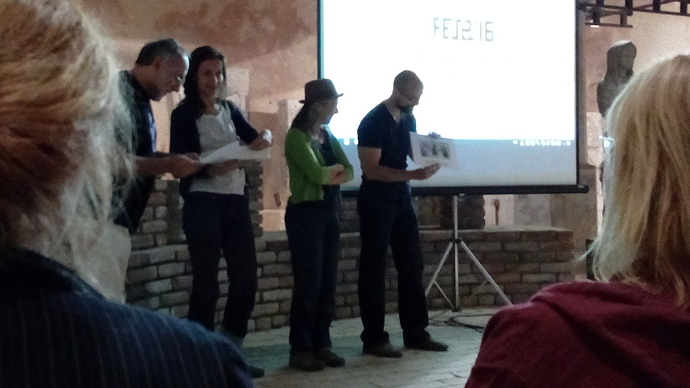 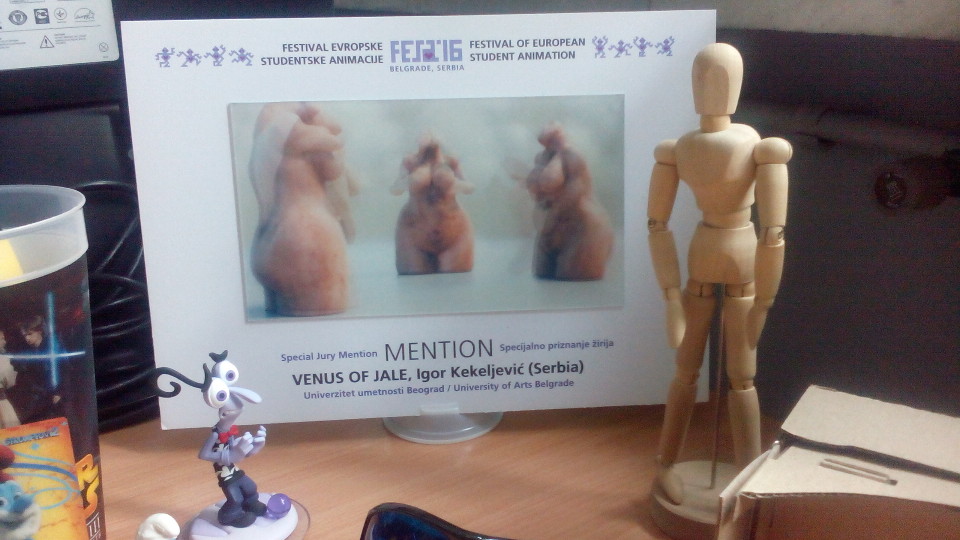 This diploma is so cool, it’s actually animated! It’s a lenticular print with animated sequence from the movie.

Nicely done and congratulations! Somehow I missed this when you first posted. I must say, just the quality of your prepared materials (high quality printing/binding and are those discs silk screened?) was impressive. And then there’s the video itself which is excellent all all fronts. Incredible attention to detail all around.

On the technical side, your tips are appreciated and I did have a couple of questions: