Vialchemy
The idea of the game is to collect and avoid randomly falling liquid drops.

“time” liquid will be running on the right, you can increase it by collecting green droplets.
Avoid black droplets or the game ends (current state, will propably change to some other effect.)
Blue droplets will award you 100 points, Orange will award you a multiplier for the next collected point or time droplet (multiplier will even multiply itself if you manage to collect them more)

Each time a droplet gets past you, it will eat out some of the timeliquid.
after a period of time the droplets will fall faster and faster (also the time liquid will run out faster and faster).

Gelstone : Don’t ask what it means. It was just a silly name I chose for my site domain couble of years back and I’ve been using it ever since 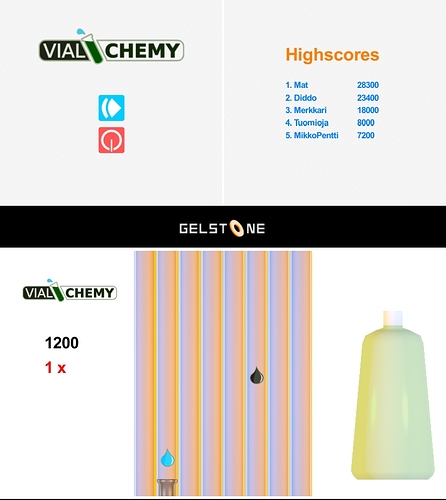