I think it needs more dirt tho…

It is too dark on the floor and without fine GI. Are you checking Color Manage in BI Shading panel?

I’m sorry but what is GI? If BI is blender internal render engine I have used cycles so far I plan to when I have got everything positioned and modelled (am undecided yet) to then do a render in Blender internal for volumetric lighting and mix it back in in compositing or photoshop…

Here you can see what I mean. Crazy (settings from BI affects the cycles render) but this is it :yes: . 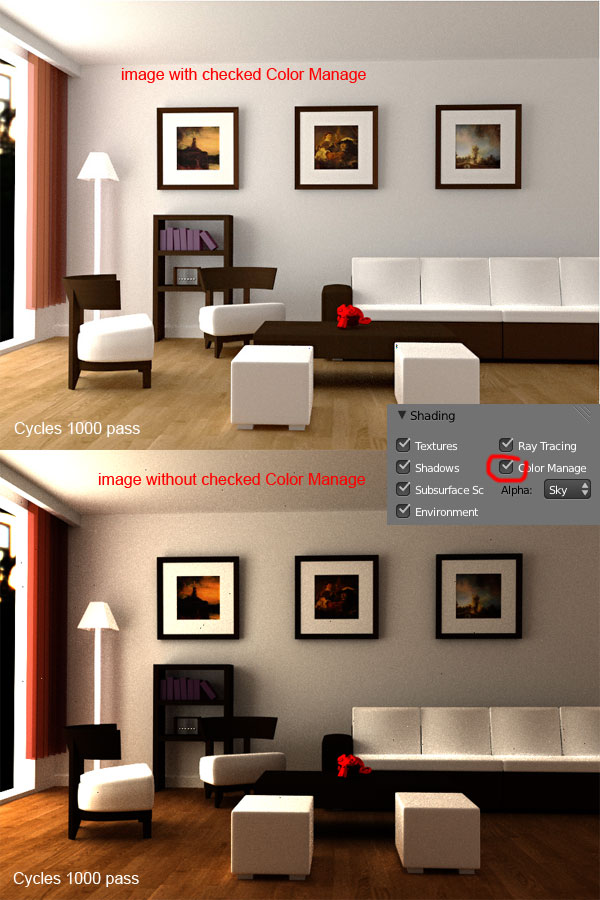 Interesting I shall give it a go. Although I kind of want my room to be fairly Dim as it is a sunset scene.I
I can see that the carpet on the left needs more light but am whary of giving it too much to lose the sun shadows.
Very odd that a setting in the internal affects cycles tho. …

Here’s a list of what I have already changed:
Plumped the cushions on the window seat.
Textured, fattened, dropped the cushion Onto the winow seat ( it was floating)
Changed the texture on the beams slightly and removed the accidental bump on them.

Am in the process off trying to fix the texture of the frame on the larger picture (I want something like one I have at home with a gold paint half scratched or worn off)
Am gonna give the colour manage a go.
Maybe change the sun angle to illuminate and focus attention on the table. Possibly move chairs like some one has just got up.

@B65ISP, i actually think your image without colour corresction is much more realistic than the one with CC.
@cookingglen, nice dining room, reminds me of a b&b i stayed in once

only problem is there no focal point atm, nothing to draw your eye to specifically (that causes people to dot around the whole image but not soak up all the effort thats been put into it)
keep up the good work

Dado rail might be a little low; pictures were usually hung from a chain that was hooked on the rail.

The sideboard would have more likely had decanters on it; maybe tureens.

The table is round; it is relatively unlikely in a victorian dining room. Your image looks like it’s a restaurant with just one table in it.

Turkey red (the pattern) carpet, depending on the date would not have been used; the pattern, often called, Turkey Red as it exists today did not exist then. Carpets did not fit the whole room; as a rule they were more rug-like as in there was a border around the room.

The chairs are also modern in design.

Very nice modelling though; tweak cycles lighting imo; sunset isn’t the impression I get from the scene.

Right sorted for the moment the texture on the largest picture frame. Made the picture rail higher,am gonna stick some string/chain on them ( would like chain but my gpu a GT 430 1gb card is running out of memory I’ve overclocked it to the max but cuda out of memory and my cpu takes like 5 times as long to render…

(any ideas to help with that other than pulling my motherboard and getting an extra gpu to sli with the one i’ve got…no money I’m afraid) going to try the rest in a bit.

Interesting turkey red carpet… I got a green seventies wallpaper and messed about in photoshop till I got one I liked… When did turkey red come in?

It didn’t; Turkey Red pattern as it’s called actually refers to a style of manufacture originated in arabic countries. It doesn’t have to be red.

I feel for you, honest(:p); as I use ati card I always have to use cpu; at least there are no memory issues. Look at your subsurf levels; any of them you can reduce a level, try doing so and see if it makes a difference to the render. I’ve actually taken about a million faces off my current project by reducing subsurf levels.