I’m doing a short movie project and I noticed that viewport fps takes a hit on animated armatures than the non-animated ones. Even when there’s no animation at most parts of the armature.

I took Ian huberts project file from the Blender website. and to match my project I increased the poly count in one of the characters.

I have attached a file Its in Blender 2.93

In collections when u playback “with animation” you will notice it will run really slow.

Disable that with the check box and enable “without animation” - you will notice that it will play at 25 fps.

I think that blender is calculating animation even before it occurs. Do you think it’s running as it should? 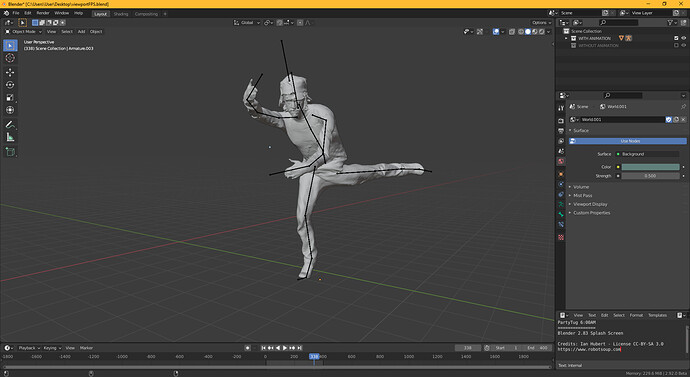 So there are a few things that definitely aren’t an issue. Any transformation, of any bone, means that the entire mesh needs to be recalculated, which is what causes the slowdown, and there’s no way around that beyond carefully dividing your armature and mesh into individual parts.

The thing that might be an issue is that any animation on the armature means that the armature is recomputed at every single frame, meaning that the mesh is recalculated on every single frame. This is something that could be addressed, but generally speaking, is pretty low priority-- generally, if you’re armature deforming something during playback, you’re armature deforming it throughout playback (even a very still character should still be breathing.)

The bigger problem here is Blender’s armature deformation, which has very poor performance, as demonstrated by this file; I’m getting 6fps on 180k armature deformed verts, no other modifiers. That’s pretty terrible when comparing to any number of different game engines, which are going to be armature deforming all on-screen characters (probably not 180k verts, but possibly close) at 30-60fps while running other code and rendering something much nicer than a solid view (including many other, non-deforming verts.)

So while I think Blender’s armature modifier drastically needs some love, the fact that the mesh is recalculated for any bone transformation when that’s not strictly necessary doesn’t seem like a particularly pressing part of the issue.

I see that If i open the file in maya, it caches the animation(you can see in the playback timeline). It would be nice to have that in blender. And I’m blown away how it works in unreal xD you can have any amount of this rig.
I hope the fix is there somewhere in this road map