So this is an Eevee render of some Viking ships I’ve modeled (you can find the models on my Sketchfab). I was trying to do a more moody and cinematic render, but I feel like it’s missing some pop or contrast or something in the lighting isn’t quite working?

Are you using Filmic Color Transform? Is so, I would bump this up to Medium High Contrast and see how it looks. I think you’re right, this is a good render, it just needs a little more contrast, and that’s probably the easiest way to do it

Don’t know your intention and it already looks great the way it is, but to answer your question perhaps change the moon’s light position or maybe one coming from something outside the view. Or even some lights on the first ship. It’s up to you what you want to tell while enhancing the render

Thanks for the feedback everyone! I decided not to play around more with the lights for now, but I did bump up the contrast a bit. Which do you prefer? The stars have changed as I just installed the newer version of Physical Atmosphere and Starlight which I guess has a different seed for the stars. My aim was just to do a cinematic type shot of a small fleet of viking warships on a foggy morning before sunrise, with the crew starting to come awake and lighting lamps.

I think you could use even more contrast, but it looks good!

My fear with bumping up the contrast too much more is that I was starting to lose too much detail in the darker areas. Do you have any tips or suggestions for increasing contrast without killing detail in the shadow areas within Blender? I’ve been doing all the tweaking in the compositor using the Color Balance, Brightness/Contrast, and HSV nodes. I was trying to avoid taking it in to Affinity.

I try to keep things real-time without the nuisance of taking things in the a proper game engine. Can’t wait for Eevee to have realtime post-processing effects!

This is a great concept and pretty good render ,but could use some more contrast to highlight the details. I would light this a bit differently maybe choosing a sunset to illuminate the water and ships. I also think the tent fabric could be more detailed and less uniform.

Oh yeah - and although I think EVEE is great, I would try to render this in cycles…

Ok, went back to the drawing board on the lighting - changing to a more cinematic night type of shot. Thoughts?

Okay okay, your creation is already pretty amazing, although, there’s some things I would change…

Wow these look great Kazrarr, thanks for the suggestions! I was thinking about adding more ships too, I think you are right that it looks better. One of my inspirations for this scene was the 13thC rune stick from Bergen depicting ship prows which has way more ships: 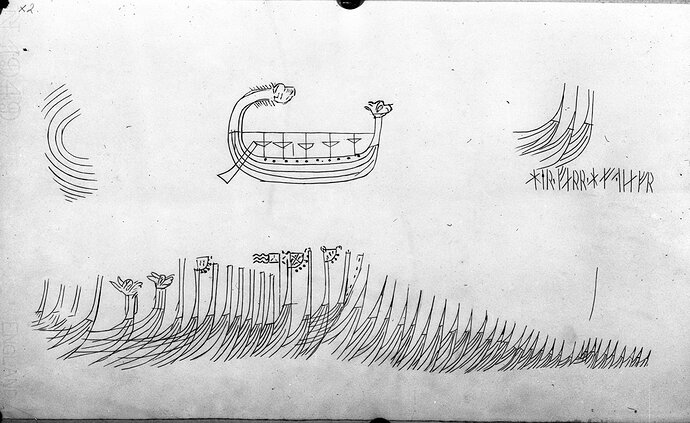 I like your color grading better too, I’ll probably mess around with that and the contrast some more as well. I think the frame works too, as does the dirt.

Only thing are the torches - this is kind of an archaeological reconstruction (I’m an archaeologist) and those types of torches aren’t period accurate to the 11th century. In fact they are more of a Hollywood invention than anything!

They probably would have used ceramic tallow fat lamps, or rushlights or something. Those Hollywood torches wouldn’t last very long and the fire is very open and uncontrolled - not a great thing in a tar covered wooden ship, haha.

About the the torch, I’m sorry, I’m not a knower at all, you made me learn something, in my art, I’m sometimes more about “what looks good” rather than “what make sense”

One more tips :
The ship are maybe too well aligned, if you know what I mean, nothing is perfect, specially in the sea where it is even more complicated, so maybe try to move randomly some ship slightly forward and backward, maybe a little bit left and right too, I think it’ll look more realistic

Also, (now I know why) when I’ve been using the light on the ship, it bring the attention of the viewer :

A bright orange light contrast well with the dark and blue background, so the attention of the viewer is instantly brought to the ships

Plus the light help with the story-telling, I don’t know what’s your point of view, but with your image, the ships seem a bit empty, desert, like if there wasn’t anyone on it…

It’s ok, I didn’t mean it in a bad way, the torch thing is a pet peeve of mine

I get a bit teacher-y too when it comes to history stuff, haha

I see what you are saying about the lights drawing the attention and adding contrast - especially that the ships look a little deserted. I was thinking to maybe add some characters holding lanterns to the front of the ships. Realistically, warships would have had a night watch when drawn up at anchor! I think it would also add more of a sense of scale, it’s hard to tell how big the ships are right now. That means modelling characters and clothing though

I’ll probably have a go at MakeHuman instead of modelling them totally from scratch.

Thank you (and everyone else!) For all the feedback and critique so far! It’s all super helpful!

Just make it daytime, to start with. Nothing looks interesting at dawn or dusk.

I think the night light here is actually pretty cool. Especially @Kazrarr 's edit, I would consider that a very good piece of art

Hey especially if it’s a still image you don’t actually need to make a 3D character!

Just checking: do you have a green screen and/or can you draw simple silhouettes?

Well I tried something to give the impression that there are people inside the ship:

It kinda looks like dirt marks on the tent but eh, they are literally blurred blobs on a multiply layer

(they look like this without the blur and the background)

They don’t need to be complicated, but with more effort to make them look like something and using them as planes inside the ship to actually capture the lighting conditions and the depth the effect can surely look a lot better

I think that looks really good, it’s a small change but it definitely adds life to the scene

Thanks for all the tips! Here is a small progress image. Didn’t ahve the time to decide between silhouettes, images on planes, or 3D models yet but those are all great ideas! Hmm, this looked more contrasting in the render window. I guess the compression might also be flattening the values a bit?