Meet Vincent Valentino, aka Vinny the Vandal: An aging mafioso, still clinging to his past days of glory. This is something I’ve worked on and off in the last couple of months…I wanted to go for a realistic-cartoony style hybrid in a sort of noir back-alley setting, then decided to take it a little step further with the studio renders.

Done in Blender, post-pro in Photoshop and rendered in Cycles. 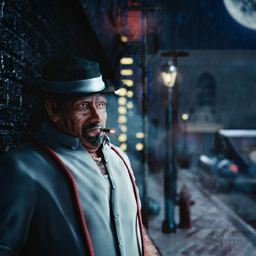 sir congratulations for this result and all your effort on made this work, I like the props in your scene, but my favorite is your character.

His head and face seems off. Can’t really put my finger on it.

I did some photoshop with some of the proportions of the face.

I think his eyes are too small.

Also a vandal looks much cooler with a baseball bat than a tomygun. 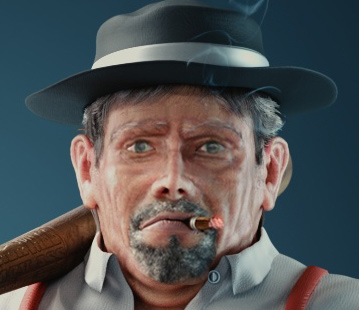 Thank you. I appreciate the comments and feedback.

bidbad: Yeah, that’s the issue with using multiple references, It can throw you off a little…especially when sculpting ‘heavier’ characters…ahem. (I intended for the character to be a bit more obese)

The baseball bat does indeed look cooler…I thought about using it in the main scene but then I was like what I’m going to do with this Tommy Gun now? He’s still a mobster after all.

Decided to do one final render before moving on. Vinny had a tough day: