So earlier today all the major newspaper reported about a man in his 40’s taking an afternoon stroll being violently attacked by a bear. The police and other authorities also made a big fuss of it and for hours, people living nearby were recommended to stay indoors a.s.o…

So now the police gives the statement; 'We no longer think the man was attacked by a bear or any other wild animal"

The man persists that his story is true. To prove the attack did happen, the newspapers were provided the following image. 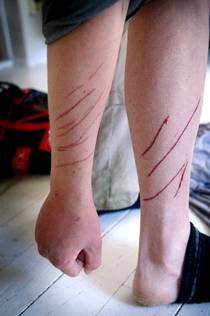 And no, I am dead serious. True story - original image. And I am still laughing. ;D

Edit: And the Eurasian Brown Bear is about the size of a North American Gryzzly, 300-400 Kg’s, though the largest specimens are on par with the Kodiak Bear, almost 500 Kg’s… A bear claw grows to about 2" (5cm).

Oh no! That is silly! It looks like a kitty-cat got him! That or a felt pencil!

The press here is mental beyond reason. Today they speculated it was an owl attack. And no, I’m still not kidding, hehe…

I’m actually pretty sure it was a wolverine. I got a link to a youtube clip and the injuries where more or less identical. But if so it’s still the first recorded wolverine attack in Sweden ever. But the bears here chew on a hunter or to a year, especially in the spring up north when the bears are just woken from winter hibernation… In the south there’s no bears, just elks being hit by trains. ;D