Hi, From time to time I switch back to this thing. As most of us, I’d want to make realistic clouds with the tools already available in Blender.

This is my most recent trial. The textures are only alpha, and shadows are real.

Unfortunately, this method needs raytracing, and this 8 seconds animation of only one cloud took 24 hours to render on a quad Core computer at 3GHz !

The setup has been done manually, but uses a method almost identical to the one used in the excellent CloudGen script written by Alan Dennis, excepted that The cloud of dots used for the placement of the billboards has been done using David Bertin’s (Aka GFA-MAD) DotFiller script, allowing to fill a mesh with vertices placed at random.

TYou can model the shape of the cloud, fill it, and then copy bunches of vertices and make your cloud as you want.

The square Billboardshave to be subsurfaced at least twice to avoid artifacts.

Raytracing is necessary, and the billborads must receive transparent shadows based on alpha.

This leads to a huge computing time. I’d like to get the same thing with Buffer Shadows because they are really faster, but so far, I haven’t got the transparency effect I want, and there are ugly visible edges around the billboards, visble even with specularity disabled…

More news later if I find a better and faster solution (in my dreams !)

For what I know, each attempt of using SSS to produce clouds so far were done applying SSS to closed mesh. It is logical, because SSS is supposed to simulate the behaviour of the light inside the object.

As I was coming to the point where all obvious and logical solutions had failed, I have had the idea of testing SSS on flat materials. I mean in this case on the billboards used for my cloud simulation, using the Shadow Buffer lamp that hadn’t given good result until now.

So,I have switched one more time from Raytraced lamps to Shadow Buffer lamps, using this time SSS. I got almost immediately, not perfect but encouraging results !

After some hours spent at testing one by one all the parameters of SSS and adjusting accordingly the material setup and the Lamps setup, I have got this result : 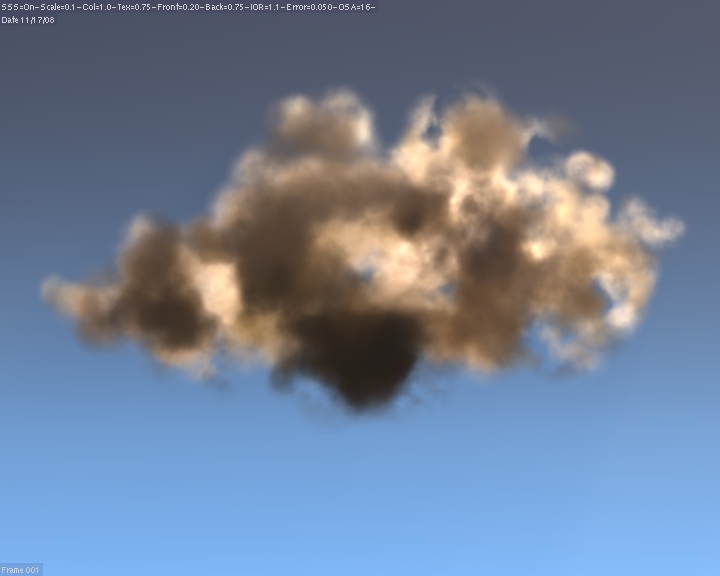 A single frame of the previous animation rendered at same resolution and OSA 5 with raytracing took between 8 and 10 minutes for a less natural result.

The dark parts of the clouds are not done using textures. They are the actual result of light passing through the cloud.

As shadows are the difficult part, I have set them a bit strong to show the effect.

I still have to make trials with more clouds, and see the result and rendering time, but after days and days of searching a good setup I’m rather happy of this step.

Here is a link to the HD image : 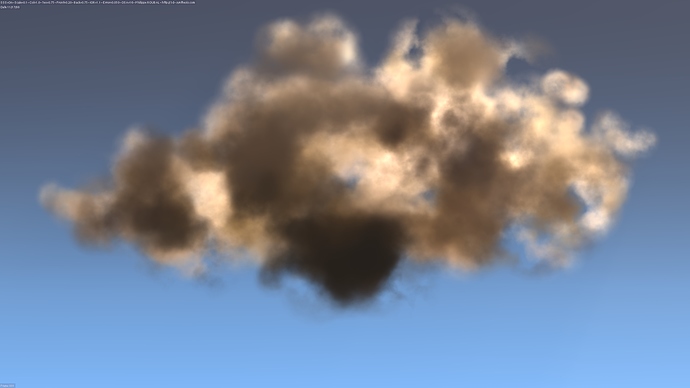 I plan to render a 8 second animation tonight, and if everything goes fine, I will put it on line tomorrow.

If the result is at the level of my hopes, I will make a short tutorial and provide the Blend file.

The tutorial will not be long, because the main important thing is the right setup of the parameters.

The making of the scene itself is rather simple.

For what I know, each attempt of using SSS to produce clouds so far were done applying SSS to closed mesh.

Um, I’ve used the billboards with SSS technique in several images of mine in the past for cloud effects, it was only my first cloud test I used a closed mesh.

excellent results! I look forward to seeing your specific settings!

Hi! Thanks! Well, here is the most recent test :

Next trial : I have to check the scene with the camera flying through the cloud.

@Cyborg Dragon : Did you try to make animations with your clouds ? The flicker problem with billbords seems hard to fix, because the nature of the trouble is not really identified… It can’t be reflections because Raytraing is disabled… nor specular, because Spec is disabled too in the billboard material…

Well, it is late, and as the rendering is running on my other computer. I will continue searching tomorrow. I will release the blend file as soon as I’ll have finished the tutorial. Maybe tomorrow.

The phenomenon seems to happen in peripheral areas where there are less billboards. If you have only one billboard, rotating and facing the camera, it shows during its rotation new parts of the 3D texture. This could explain the trouble, but the transition would be smoother that it is in the animation. If you look carefully at the images,frame by frame, some round areas show a progressive brightness/darkness variation due to the rotation of isolated billboards, but other areas show hard bright edges, like bilboards intersections. Those are not progressive.

I fear that it could be a rendering bug, because the artifacts don’t appear in border rendering when rendering only an area around the problem…

I have written the tutorial. Here it is :

The Blend file with the setup used in the tutorial :

The useful script written by David Bertin (aka GFA-MAD) :