It has been released today!
What is vpaint?

VPaint is an experimental vector graphics editor based on the Vector Animation Complex (VAC), a technology developed by a collaboration of researchers at Inria and the University of British Columbia, featured at SIGGRAPH 2015. It allows you to create resolution-independent illustrations and animations using innovative techniques.

some of the features include:

With VPaint, the lines composing your illustration or animation are not Bezier curves, but hand-drawn curves called edges. You can conveniently set the width of drawn edges by holding CTRL. If you are using a pen tablet, VPaint can use the pressure information to generate edges with variable width.

Once drawn, your edges can be easily edited à la ZBrush: simply push the curve using our sculpting tool. The radius of influence can be almost instantly changed at any given time by holding CTRL. In the same way, curves can be smoothed by holding SHIFT. The width of curves can also be edited locally by holding ALT, making possible to intuitively design curves of variable width even with a mouse. Junctions between edges are tracked by VPaint, and always preserved during editing (unlike in most other vector graphics editors, where Bezier paths are all independent from each others).

Using the paint bucket tool, it is easier than ever to color vector illustrations. Just click on a region bounded by existing edges to fill this region with the current color, creating what is call a face (= painted region). Unlike most other vector graphics editor, the face keeps track of which edges define its boundary, and thus editing this boundary automatically update the painted region. Junctions between faces are tracked by VPaint, and always preserved during editing.

At the bottom of the window, there is a timeline to let you create an animation by drawing several frames, and you can easily play/pause with the spacebar, and go one frame left or one frame right with the arrow keys. You can either draw everything frame by frame, or copy elements from some frame (CTRL+C) and paste them at another frame (CTRL+V). You can also do a special paste called motion-paste (CTRL+V) to paste elements several frames away with automatic inbetweening. 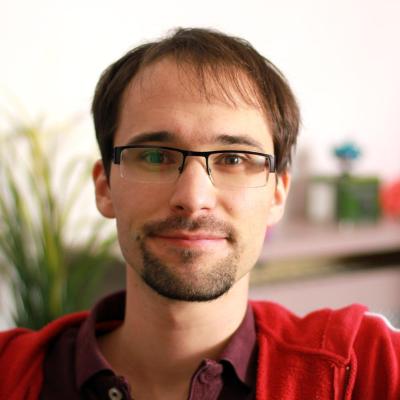 Available for windows, linux and mac

imagine having a vpaint layer in krita

Then it will be a truly complete animation software.
Vector layers in krita dont cut it for me

really nice, thanks for the link

Thanks for the link. I still sometimes use Flash for vector painting, although it’s painting features haven’t been improved in 17years.

imagine having a vpaint layer in krita

Then it will be a truly complete animation software.
Vector layers in krita dont cut it for me

Anyway, this is cool, one of the main animation workflow dudes in irc was really excited about it.

Anyway, this is cool, one of the main animation workflow dudes in irc was really excited about it.

Maybe something to consider for the next kickstarter?

Vpaint is also valuable as an illustration (inking) layer.

Consider that Clip paint studio has a similar vector layer - and it is getting animation features also later this year. Clip paint is being developed by the same people who make Retas studio - the software used by 90% of japanese anime industry.

That said, I am also excited about what Krita developers are doing right now! You guys are my heroes. I dream of the day when I can dump tvpaint for krita.

I’ve been using tvpaint on a production for television and it’s nice - but has so many fundamentally weak points.
Rotation of a selection or any kind of distortion creates ugly marks around the lines (bad anti aliasing).

It is also really bad at reusing drawings. You can not instance a frame. Every part of the workflow is destructive. The license has a ridiculous cost.

And of course - no tweening. You have to draw the inbetweens. No way to animate a modifier.
This is really the biggest selling point animation wise - in vpaint. The tweening capability.
Cacani is doing something similar

But krita has deformation filters, which potentially could be keyframe-able in the future. Something very useful that tvpaint does not have.

Well, I understand your ache for good animation software, especially if you don’t like the current offerings, but I just want to prevent you from having too much expectation. Right now, for Krita in terms of animation, the main focus is being a good raster animation editor which has good playback performance, so getting the basics right.

[/TR]
[/TABLE]
Yes, I was on the notify list. I’ve checked it out, but it doesn’t build with Qt 5.5 :-). But I’m looking into it, with the probably far-fetched goal to add vpaint layers as a new vector layertype for Krita.

Meanwhile some of the early users have expressed interest in the applications of this in 3d graphics.

Today Synfig developers started looking into it. Also It’s github started getting contributions from another user and the main dev merged them. I posted to ask about what the roadmap is.

Someone beat me to making build scripts at AUR for arch and manjaro linux users:
https://aur.archlinux.org/packages/?K=vpaint

So now vpaint is really easy to build with a single command - both the stable and the github version.

The line sculpting in vpaint is somewhat similar to blender’s grease pencil.

If the grease pencil could be tweened like vpaint’s line though - then just imagine how far this would move blender’s 2d animation capabilities.
Vpaint in blender’s grease pencil.

The main developer of vpaint is currently at siggraph. Maybe if anyone here is attending, you can have a chat with him. Ask some questions.