The last few weeks, I had the opportunity to create a virtual reality kitchen for a Google Cardboard test project. I got the data from a kitchen planing software imported it in Blender and my job was to create the materials, adding some kitchen objects and render it in 4K (4096×2048) 360° stereo 3d.

So you can view the whole kitchen, I created 5 renderings from different angles. I had to do a lot of tests with the render setting because the render times were awful but I found a good way to render it “fast” and nice (noise less) quality.

You can view the the kitchen on you desktop, on your smartphone (much better experience) and with a Google Cardboard (in stereo 3D) with the best experience.

Watch it on you Smartphone or better with a Cardboard here: http://www.eisklotz.com/3d-graphic/vr-kitchen-project/ 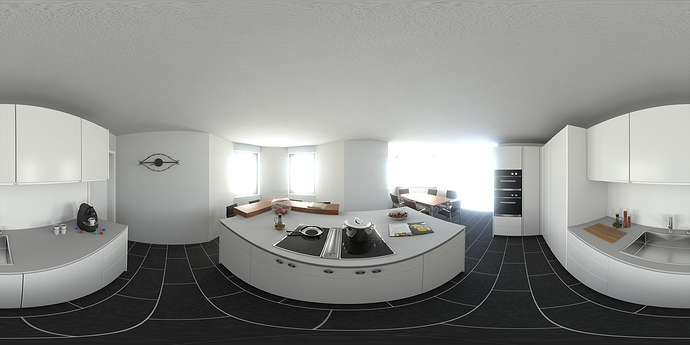 Hey, this is great, thanks for sharing.

Which build of blender, any special tools? Are you doing the per pixel parallax

I was using the version from builder.blender.org, there is a special option “spherical stereo” which make the 3d effect on 360° renders correctly.