In a recent project I needed to add subtitles to a video.
Many subtitle editors out there, but not many ways to add(burn them in the video) the subtitles. VLC never worked for me and from previous attempts I had only found one software that can do that and it had some obscure name that I always struggled to remember(didn’t find it this time around when searching online).

I don’t remember if AE or Premiere had addons but last I remembered they never had a feature to load a .str file and automate the manual placement of the subtitles(and they are paid of course). I used to use Da Vinci Resolve since it had free version but I don’t remember it having that feature as well. And then there is Blender’s VSE. I assumed that maybe blender had something related to subtitles, but sadly it followed the same case as all the other applications. I looked for an addon and found one for blender 2.7. Never tested if it will work in 2.8 2.9, 3.0 or 3.1(as I usually use nightly builds).
Also I had to change the length of the video and insert an audio track from a better recording. And I was a bit annoyed that I have to do this and this here, then export and do it elsewhere then go back and do this other thing in blender…
So I said “F-it I’ll make one addon myself” so here it is: Github Link

It’s really basic and simple, it worked for my project and hopefully it will help you/ save you time , next time you have to add subtitles to a video.

Note: there are limitations…or features missing like having a subtitle with more than 3 lines in them. I remember reading an article once, on good subtitles, and there it stated that you should never have 3 line subtitles if you want the viewer to have an easy time reading the text.
Also, there is some sort of “refresh” or “update” feature when it comes to the import, but still it’s better to have a final version of the subtitles to be imported.

Supported formats are the ones supported by the pysub2 library.
they are listed as:

You wrote an addon to burn in subtitles? Why not just use handbrake or ffmpeg?

Suppose it might be useful for something you want that’s non-standard or use a custom font or something.

Yes I try handbrake every time I want to add subtitles, and every attempt following a tutorial just adds the subtitles as “subtitle track” rather than burn add it to the image. Haven’t really tried ffmpeg, not sure how to do that either. I just wanted a quick “one click plain and simple subtitles” in the video editing software I’m using. Maybe there is some setting that I’m missing when dealing with Handbrake, but I’m not making subtitles every day, and I don’t want to fiddle with settings to get what I wanted.

Anyway, as I pointed, my main goal was to avoid the go here do that, go elsewhere and do that other thing, then come back to do this third thing, which was the process I was doing.
If you have a good seamless painless “I get what I want” workflow with Handbrake and ffmpeg then by all means go with that.

Oh sure, it’s just puzzling to me because it took me like 10m to learn handbrake’s subtitle controls and it certainly took a lot longer than that to write a blender addon

This is how you burn a srt file in handbrake: 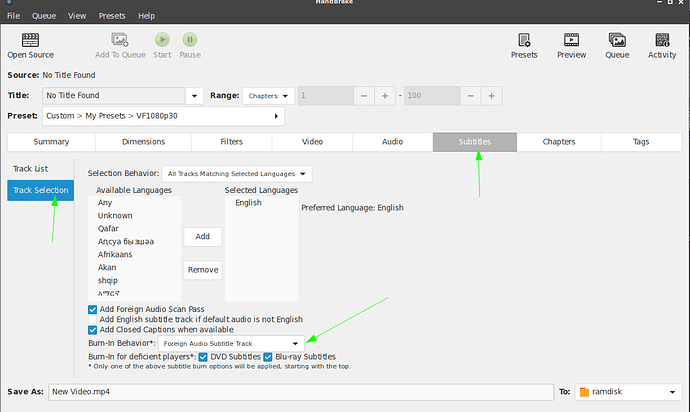 But…as I said, I don’t want it as a “Subtitle track”, I wanted the subtitles to be “burned in” or become part of the image files that makeup video file.
If I can describe it like this…it’s like exporting a flattened .png or .jpeg, rather than having the .psd and being able to toggle on and off that layer. I wanted the viewers to not load their subtitles from right clicks and selecting subtitle tracks.

As for the addon part, yes after the third day I was “I would had done this in 3h if I searched long enough for that software”. But still now I don’t have to search for other software and again…I don’t have to go to this that and the other software, when I want to edit a video and, and add the subtitles I made.

Again…if you don’t find it useful don’t use it.

I had only found one software that can do that and it had some obscure name that I always struggled to remember(didn’t find it this time around when searching online).

Maybe you are talking about Kdenlive ? it is a little bit similar to Premier pro while being free and open source, and it does support importing/editing subtitles starting from v20 and it is what I’m using right now.

But I would rather have blender VSE rise up and be able to do everything in one app if possible, and your add on is definitely helping (while staying up to date), there is this similar addon called Subsimport but sadly it is no longer updated (last working version is for 2.8).

@Voidium ,
no it’s not Kdenlive, it was really obscure. Found it on a forum somewhere, and was developed by a single developer. Anyway.
As for SubsImport, yes that’s the first addon I found when I searched for one myself. As you said…sadly it’s for 2.79 I think.