Hello, this is an updated version of my old render. This time I have used Cycles hair rendering system, added some details and improved lighting. Comments and critiques are welcome

EDIT: Is there any way to set the smaller image as thumbnail for this thread? 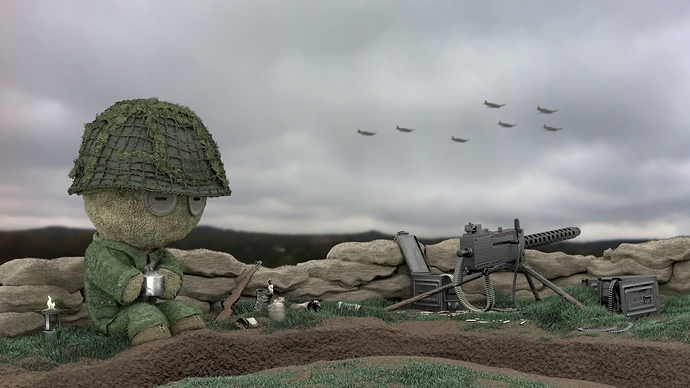 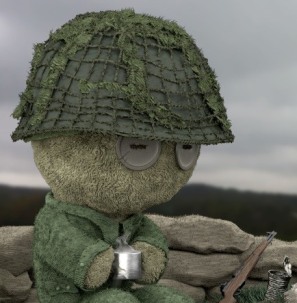 Dude! This is awesome!!

Very well done, Pivac! It looks like this fellow’s been waiting for a while. Great to see all the details you’ve put into this scene, and you’ve matched the lighting to the BG image very well. I recommend that anyone who sees this makes sure to view it full size, or you’ll miss many of the details!

Thanks bhindlilanimals and James, I’m glad you like it

Pretty good. The materials seem too monotonous though, and the background is mostly empty, and hence, mostly boring. Still 4 stars though.

Thanks, OnyxIdol. You’re right, I’ve tried to add some interest to background by adding planes, but it doesn’t make much difference. Now I realize that having some ruined structures there would have looked good.

I don’t think that I agree with the above comment. Not that they are wrong, but personally I like the way it is composed. It has a mixed feeling of solitude and desolation, which is vastly due to the simplicity. The character is alone at their post in the middle of a war, about to have his morning… tea? I don’t really know if it needs the ruins in the background. I guess it all depends on the feeling that you are going for, if you are just composing a cool scene, then maybe you could add to it, but if you are trying to sell the story above, then not so much.

Thanks, B-Rae. Well, I guess it depends on how each one of us interprets the image. Adding more detail to the background surely makes it more interesting, but it doesn’t contribute to ‘artistical’ aspect. My own idea was to show the mental suffer that is caused by war, the one that is behind the front lines, but everyone should interpret it in their own way because we all have different asociations that go with this image

Wow, little big planet in the middle of the war! Thats the cutest render i’ve seen so far!!! Textures look fantastic and so does the light, but i think that its just a bit too bright, if you post pro it abit more it will be totally great!!!

Thanks. The original render was very dark, so I had to adjust lighting in Gimp. I might have overdone it a little, but I think it’s not too much.

Wow, love the concept and the execution. The lighting is a little boring by the way.

Seems like lighting is one of the weak points, I’ll keep that in mind for my next render. Thanks for comment