I followed an approximation of the spider model on Blendercookie.

SO I have a masterbone to which the legcontrol bones are parented.

The problem is that I used that master bone to animate approximatly where the body would be in the 3D space .
A rough walking “location” animation. If I would have done this with the Body bone,the legs would have remained firm on the ground which is not what I needed at the moment.

Now I do want to make ma walking animation. But because of the controls that are parented to the master,they don’t remain in place.

What I normally do to solve this is add an IK with an empty,and move the empty.B
But that worked on a model with no master bone. and on which I DID animate the body location (which here I did not)

So now if I add an IK to those control bones the ik chain only goes to the master and ignores the legchain it should take into account.

I have experimented a bit with the floor constraint and it is somewhat what I want. But I don’t think it’s really flexible to add/remove bones that need to remain fixed, and then remove that till I need it next time.

Any other stuff I could do?

so as a recap: a body is animated,but I want a control/IK/constraint on legs in 3D space,not local.

a location constraint was all it took.

Don’t know why I thought that that wouldn’t work

If I would have done this with the Body bone,the legs would have remained firm on the ground

Well that is the intent. Its very easy to animate hip / squat / jump type of movement this way. As you lift characters hip, foot stays pointed to the IK automatically.

When you do work cycle, characters body go up and down you know. Hip control makes it easier to create that movement. Foot IK “sticks” the foot to the ground as hip dips: 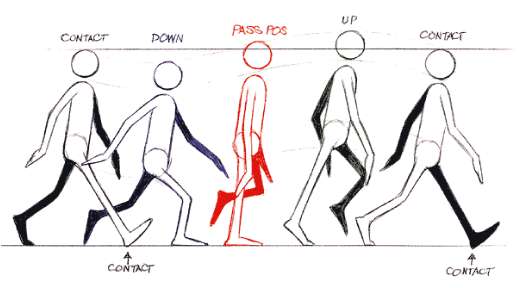