Wanderers in the Flood 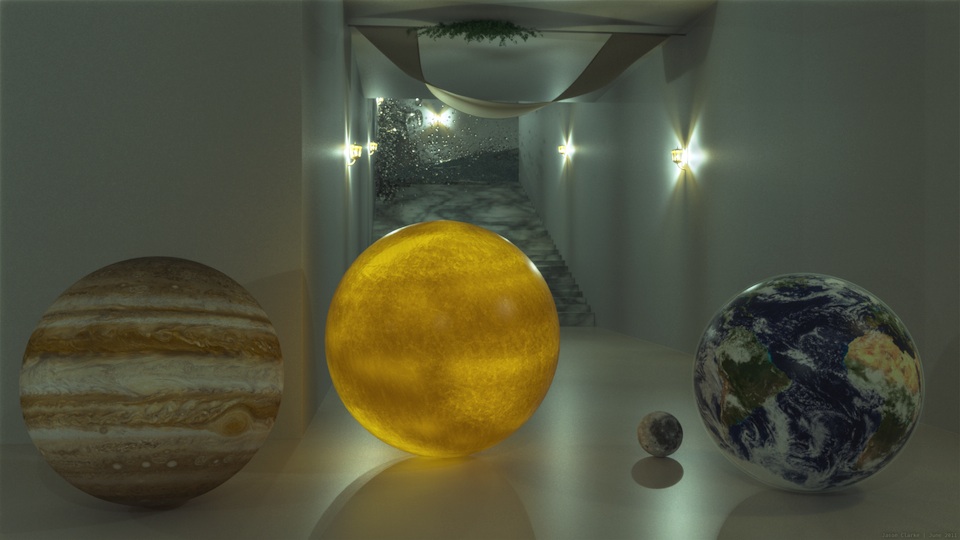 This a render I’ve been wanting to make for a long time. It’s been through quite a few iterations in sketches. The original idea dates back to well over a year ago when I was first starting to learn 3D to supplement my Photoshop skills. Actually, the idea is probably much older than that but it was only after I started learning 3D that I started to flesh it out. I finally managed to hunt down all the textures and figure out how to map them to a sphere (which is actually rather tricky, since sphere primitives are often capped with tris). Props to Moure for sending me texture links in IRC.

All textures are my own work or in the public domain, although a big thanks to Hermes at the Celestia Mother Lode for stitching together the Moon and Jupiter maps. The sun texture is my own painting. (the rest of the textures [aside from the earth, obviously] are mine too). Jupiter texture is built from Cassini photographs, the Moon texture from Clementine photos.

Whole thing was rendered in LuxRender. Main image is ~2.2K spp, although the floodwater was border rendered to ~32K. The image is built from a pair of output images, actually. One from Lux’s linear tonemapper, and one from the mantiuk tonemapper in Luminance HDR. Plus a bunch of adjustment layers in Photoshop, and some bloom.

Hey looks good.
Have you thought of letting the water flow a little more into the front of the pic?Right now it Is hardly noticeable;)
Keep up the nice work:)