Hi all …lets see if this gets a comment ,not like the last one …
modeled and sculpted in blender 4 multiresilutions .took the high poly to zbrush just for
the painting …this is a preveiw render what do u think. 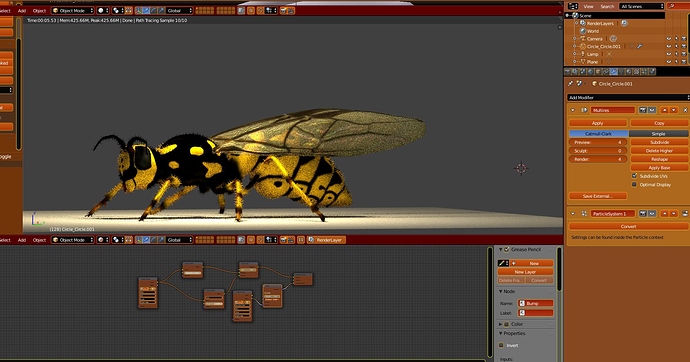 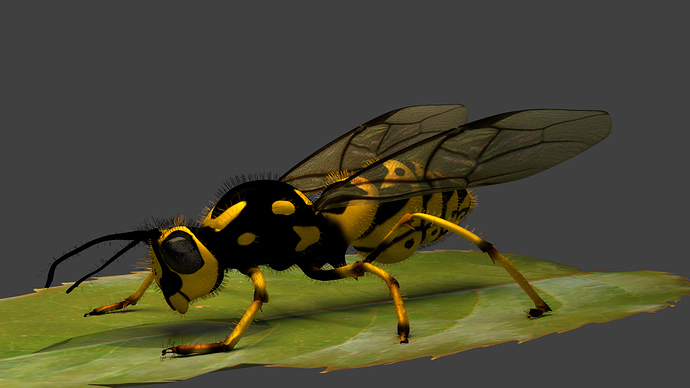 I could do with some comments or crits ,i know the front leg is not good iv fixed it
and riged him the leaf has also a normal map now .where to go with this ?

hello mate, well if u are going for photorealistic then u got some more work to be done . overall its a nice model and concept.

i would start with the fur , waspes furr is quite thick. look at some references and u got it.

the hair particles along it’s back and rear looks like the exact same. animals have variation in lengths when it comes to structures like hair feathers, and the fur like substances that bees and wasps have. there is a randomizer bar in the particles settings that should mess with the length of fur like structure and make it appear uneven. I’m not 100% sure this is at because I forget it quite often

But I think the pose / angle in your final render is not flattering for your model. Actually with that angle your model looks weird compared to your test render. But for the rest, very good work

I’m far from an expert. I love the picture. The one thing I would critique would be the hairs. They look too thin and uniform. More of them and random would look a lot better.

It’s a good effort, but needs more attention.
You should post your reference photos to get better feedback. A lot of people confuse wasps and bees, and there’s numerous sub-species within both.

If you are serious about getting it right, I’d advise forgetting about rendering and texturing, and just get the model right.

Thank you so much for the feedback , we all need it .
Here is the reference i used my first model matched this , i have noticed this one not
mabe with all the multi res on it .it looks like ill have to re model or ajust in sculp mode . 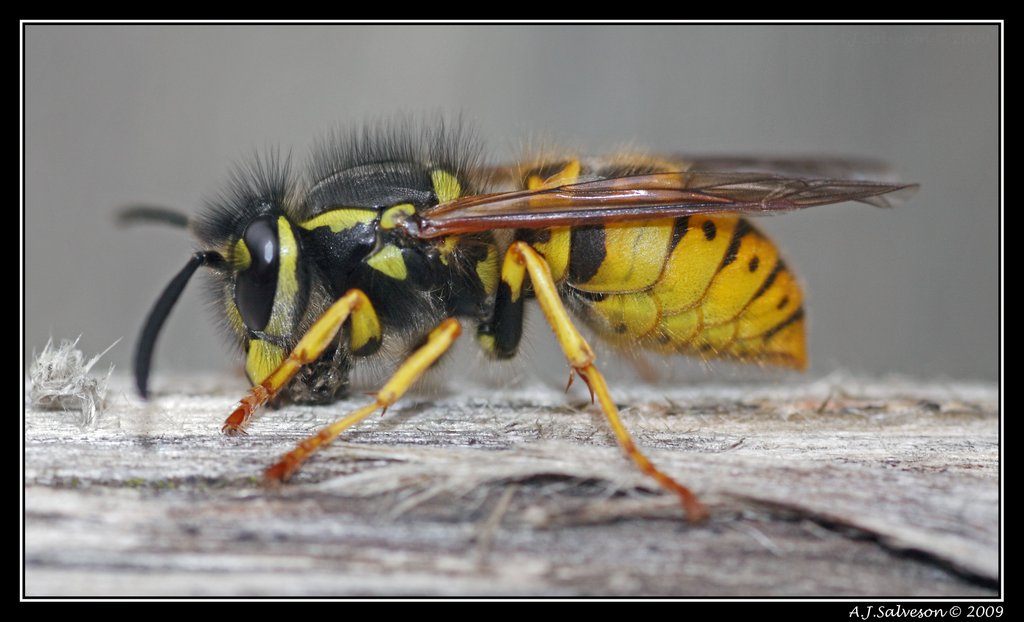 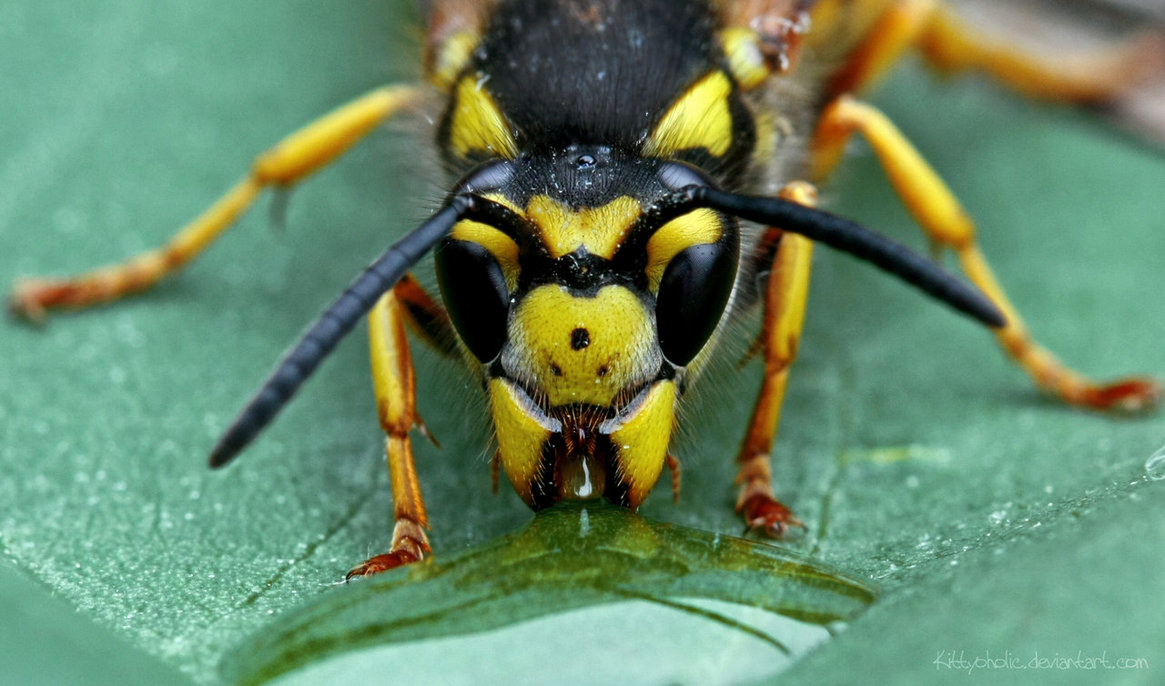 I really like that front shot, really nice idea.

Well i tryed photo realistic not so good ll play with the fur if that does not work
then im going to go cartoon style or fantasy i have a idea and a good base for it .

Ok deleted all parts i dont need for this, now to remodel a monster wasp
hope this comes out how i have this in my head 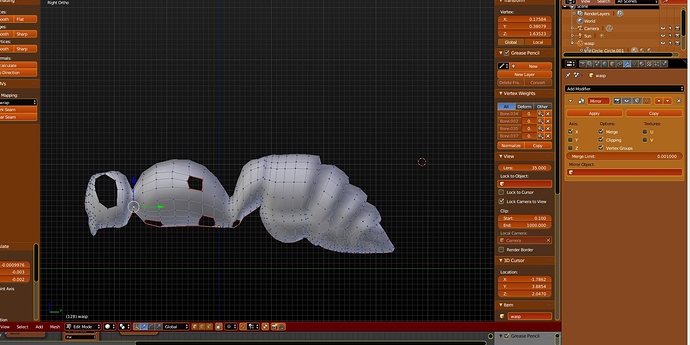 Here acouple off shots so far .ill delete the sub division and add a multi resilution for sculpting.
i think its a mutant wasp … 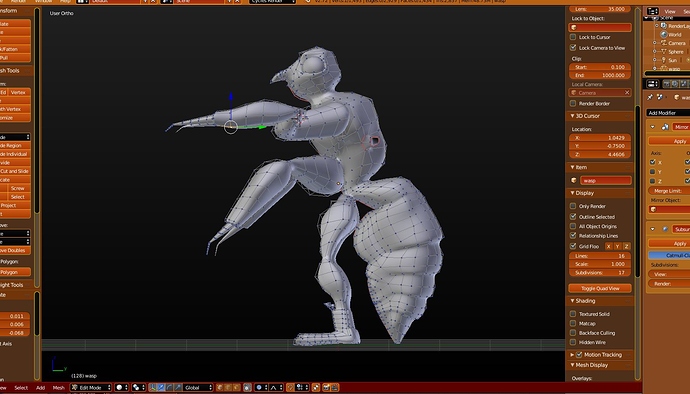 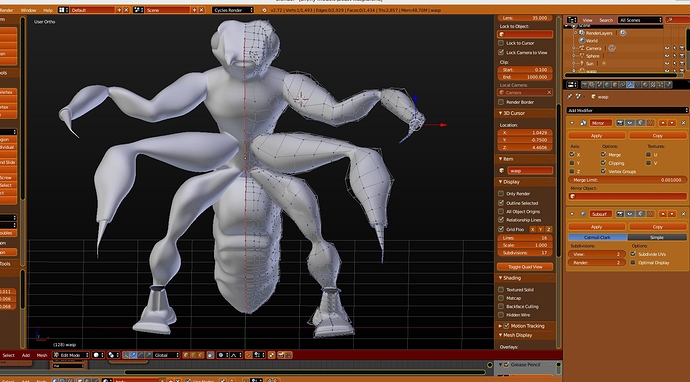