A little while ago I was asked to help out with a documentary film being made by Dam Productions here on the Isle of Man called ‘The Watchmaker’s Apprentice’. It features the last interview with master watchmaker George Daniels before his death in 2011.

Dam needed a couple of transition sequences to segway between shots while the voice-over carried through - expertly voiced by the superbly talented and uber-famous John Rhys Davies. I was sent photographs of engineering drawings and sketches George had drafted in his workshop and asked to pick one to animate. I went with the image below - I felt it would be the best opportunity for interesting animation and it fit in well with the dialogue being spoken - about how a traditional mechanical watch movement works. 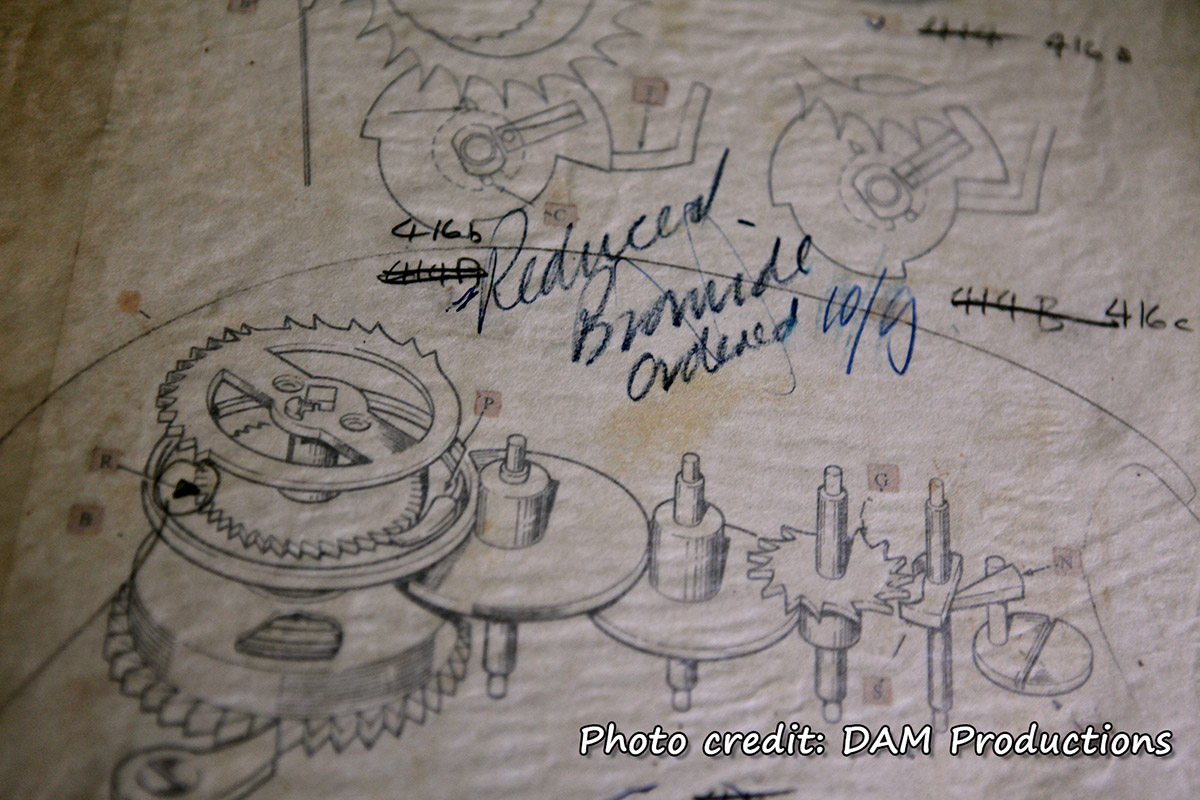 I work in Blender as my main choice for CG production, and back then the line renderer ‘Freestyle’ was just becoming available. So, now was the ideal time and ideal project to try it out.

The individual cogs were made using the ‘Gears’ menu from the ‘Extra Mesh Objects’ add-on. Given the nature of these engineering drawings with their traditional line and cross-hatch shading I decided to use hand-drawn UV projected texture maps rather than let Freestyle control the shading. I felt it was better for me to have complete control over how the shading looked and know from the outset exactly how it would look in the final sequence. Experimentation with new methodology is good (and vital) but if you’re against the clock (no pun intended) it’s best to go with what you know.

I wanted to create a real depth to the sequence so as well as making the gears in 3d I re-created the text and call-out diagram notation so that it would float across the page as the camera panned across. There were two separate Freestyle line passes, a thinner one for all interior/exterior edges and a thicker mesh outline pass. The background was a combination of colour tones and photographic elements using old paper textures. 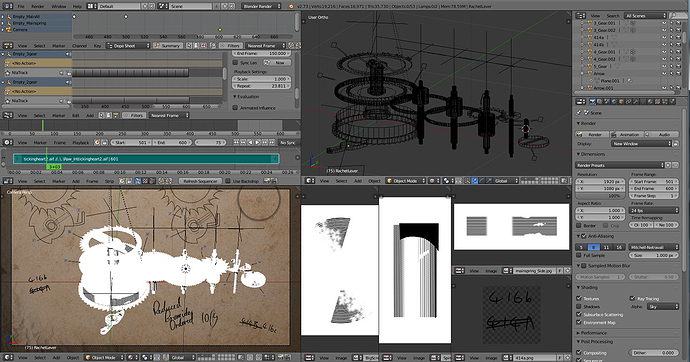 I animated using empties so that I had better control over what was moving without having to carefully select between gears. One issue that I didn’t foresee was that a couple of gears had an odd number of teeth, meaning that when I set the rotation I couldn’t rely on whole numbers - either in degrees or clock-face seconds. That led to some head-scratching to come up with rotation formulas for each gear so that they meshed correctly. Once they were set into action strips though the whole thing came together pretty easily.

I rendered out the sequence as PNG files at full resolution and also included a slightly compressed quicktime .mov file so that Dam could easily insert that into their assembly and replace it with the proper full-scale sequence when the edit was locked down.

The second sequence I was asked to do was a real speed job. It was a last-minute ‘We wonder what this would look like, and can you do it?’ moment. I was asked to produce a sequence tracking in on a starfield where certain stars would connect and reveal watch gears, connected by thin lines, like an astrological sign.

The same gears and animation was used, only this time I didn’t render the gears as solid objects - instead I rendered out icospheres at the vertex points, randomising their size and frequency. I employed Freestyle again, using it to render the lines connecting the icosphere ‘stars’ making up the gears. I also created a few ‘hero’ stars with glows and streaks - just at the end of the sequence. 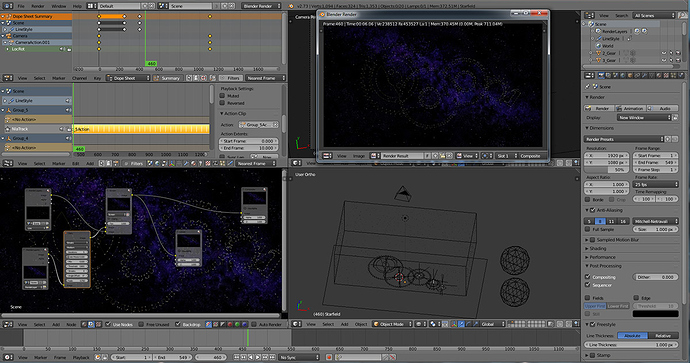 The surrounding starfield was a combination of a backdrop created in Photoshop and a large cuboid mesh containing a particle field. The particles were there to create more stars and give the camera something to push through as it tracked into the scene.

As a quick fix, I think it worked pretty well. I always find it amazing when I see the variety of uses Blender has. I hope this write-up has been useful in some way, I’ve been meaning to do it for a very long time but I’ve just been too busy.

It is a real pleasure for me to see Freestyle for Blender used for the production of these wonderful animation sequences. Many thanks for using Freestyle as well as for sharing the experience.

Thankyou guys. TK, a special thanks to you. Freestyle for Blender has been a real eye-opener for me. I have more to show from other projects but NDA agreements prevent me from doing so just yet.

Just a quick note to say that The Watchmaker’s Apprentice is now available to watch (in the UK at least) on Netflix.

My Blender contribution can be seen in the opening sequence and at 15:18.

The story of George Daniels and Roger Smith is compelling viewing. Their work is without equal. I recommend you see it.