Hello everyone,
I am making a watchtower animation Game of Thrones style. Since I am a beginner I have a few questions about how to animate and fix a bug (or is it?). You can view the animation here: 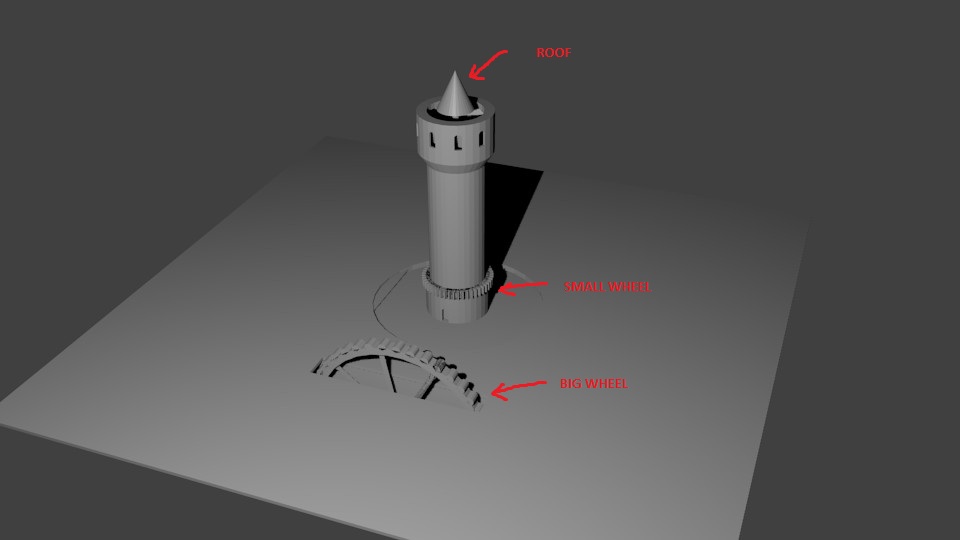 If you noticed at the beginning of the movement in animation (when the hatch starts to open) the big wheel isn’t rotating around x axis (the axis perpendicular to the wheel) but it’s rotating kinda funny, even though I told it to rotate around the axis. After the hatch opens and when the tower starts to rise, the wheel is rotating nicely. How do I fix this bug?
Another thing I don’t know to do is how to animate the roof. At the end the roof rises from the tower, but I don’t know how to make the basis of the roof (which is a cone) widen, so that it covers the whole tower. I have tried inserting scale keyframes, but when I change the scale of the roof basis in edit mode at the end keyframe, the shape also changes in the start keyframe. How do I make this work?

There is flicker on the gear render. That may be causing an illusion of gear wobbling. Check for face normal on the gear. Make sure there is just one gear object there. And, check gear center position and axis orientation. They must be exactly right.

Key frame “location and scale” at the beginning where cone starts to move up. Key frame location where cone is fully extended. Then Key frame scale up base after that. When I say “scaled up base” it is scaled in Object mode. Not in Edit mode. In Property shelf (N) there is Scale setting. Scale up X and Y to right amount and key frame “Scale”.

Once you start to mess with scale setting, do remember to key frame scale of one at the beginning to start animation fresh.