I just made a new water simulation to test my new water material with vector blur. 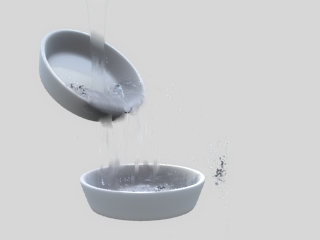 There was a (bug?) reported, hopefully to the bug tracker, about small water particles being excluded from the vector pass. In your video, they look like rocks. It would be a good test for you to render the same thing but using Motion Blur instead.