Way to track the viewport point of view?

For the purposes of “doing something based on camera distance”, can I track a position of the “camera” which isnt present as scene object (one which is used to navigate the scene)?

Yeah, you can track the position of anything:

For the camera that exists as Object, it is trivial, yes. But is there a keyword to access a point of view which is used while you navigate the scene, outside Camera view?

Do you mean the viewport view? The easiest way is with the Stored Views add-on that comes with blender, that lets you add a camera to your current viewport view, or you can do it the hard way: view_matrix belongs to RegionView3d, and there is view_location as well. Likely, this is what I need, thanks

Strange. Blender thinks this script is correct, but the dummy position doesnt update

I did mention that this was the hard way, right?

Navigating the viewport doesn’t count as a depsgraph_update. Changing objects or modes, using an operator, or editing data are the events that trigger that handler

This would make sense, only I’ve tried poking objects and the script did not respond either. Pytrhon auto exectution is turned on too

Are you getting any errors in the system console?
Another option: add a camera, parent the empty to the camera, turn Lock to View on, now your viewport navigation will update your empty location

Sometimes it gives NoneType error on view_location, though not immediately at the start of the script. So I assumed it happens when 3d viewport window isnt active

Yeah, that tracks. I’m guessing you’re going to have to manually set the context. Give me an hour and I’ll play around with your code

No hurry; camera lock solution works for me, I am just curious what is wrong with the script

Strange. Blender thinks this script is correct, but the dummy position doesnt update

I am just curious what is wrong with the script

2. Your script must be run as an operator, not in the Text Editor.

Hmm.I got the point, but neither their SimpleOperator example nor my code processed accordingly shows up in operator search

You’re not running your function?

You don’t need to run the function if it’s attached to an app handler, which it is

SimpleOperator.py (547 Bytes)
ViewpointTracker.py (662 Bytes)
No errors for both the “SimpleOperator” example copy pasted from another thread, and for my script. Both fail to register as operators. Autorun is enabled for scripts BTW.

I’m not sure why it’s not working for you. If I include your bpy.data.objects["Empty"].location = bpy.context.region_data.view_location line from your ViewpointTracker.py script into your SimpleOperator.py script it works for me when I run it as an operator.

Could it be that custom operators have to be enabled through some preference setting?

I’m not sure. The only setting I can think of would be this setting: 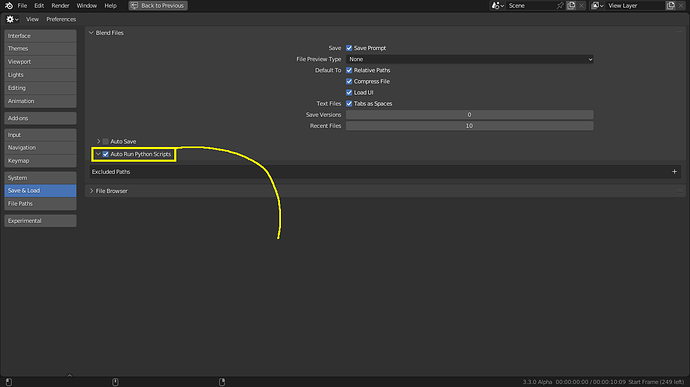 However, that shouldn’t be blocking your operator scripts from running if you’re running them manually.